Fighting Through the Ban

Despite being ineligible for the playoffs at the beginning of the season, EWU football gutted it out, achieving something that almost never happens 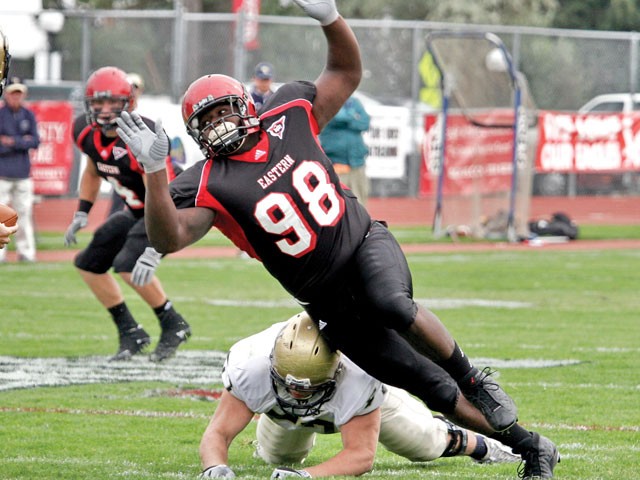 EWU Athletic Dept.
Renard Williams does things his teammates have "never seen a kid do."

On the football field, Renard Williams tends to be flat-out mean, vicious and ornery.

Arguably Eastern Washington’s best NFL prospect, Williams is 6-foot-2 and 290 pounds of scarcely controlled fury at defensive tackle. The Port Orchard native does not take kindly to anything or anybody that stands in his way.

And yet, when word came down last February that the NCAA was banning the Eagles from post-season play in 2009 due to rules violations by the previous coaching staff, Williams recalls being more numb than angry.

“We were in our winter workouts,” Williams says.

“Everyone was in our locker room. We had our athletic director, Bill Chaves, and our head coach [Beau Baldwin].

“They just came in and told us there was the postseason ban. It didn’t mean we were necessarily out, because they were going to appeal it.”

Fat chance. The NCAA rarely admits to errors in judgment, and the odds were astronomical against the NCAA reversing field in time to let Eastern participate in the playoffs nine months later.

Williams and the Eagles received wonderfully shocking news in late October when the NCAA — seemingly without any significant new developments to work with in regard to several minor violations that the Eagles submitted on their own — declared Eastern eligible for playoffs consideration.

“I got a text message from a teammate,” Williams recalls. “He had already heard. We had a team meeting… It was very business-like, because we still knew we had to win the games to get in.

“It wasn’t like, ‘OK, you guys are automatically in.’ I’m sure guys were relieved, but we still knew we had business to handle, we still had games to win. There wasn’t no jumping up and down or anything.

“We just took it as, you know, this is another opportunity for us to prove that we should have been here.”

The Eagles had to win their three remaining games — all away from Cheney — to crack the 16-team field for the Football Championship Subdivision (formerly NCAA Division I-AA) playoffs. They did just that, surviving a 49-45 score-a-thon at Northern Arizona on the fi nal day of the regular season to keep playing.

Williams, a red-shirt sophomore, says he was happier for the seniors than himself when the Eagles qualifi ed for the playoffs.

“I still have two more years, so there’s two more years I can get in the playoffs,” Williams says. “I was just relieved and happy for the seniors that they could experience that their senior year and just have a chance to win a national championship.”

Amazingly, Williams says the Eagles began talking in earnest about making a national title run as soon as they beat Division II Western Oregon 35-14 in the season opener. Mind you, that game took place almost eight weeks before the Eagles were cleared to possibly play in the post-season.

“After the first game, everyone was like, ‘Yeah we have a shot. We have all the pieces. We just have to play good and hope the appeal gets removed,’” Williams recalled.

Injuries took a toll on the Eagles as the season unfolded. Eastern finished the regular season 8-3 and ranked 13th in the FCS, but the Eagles drew a first-round road game with 12th-ranked Stephen F. Austin, and they bowed 44-33 last Saturday in Nacogdoches, Texas.

Williams, a first-team All-Big Sky Conference pick, led Eastern in the playoff game with two quarterback sacks and three tackles for losses. There are discrepancies among the statistics of Eastern, the Big Sky Conference and the NCAA, but Eastern credits Williams with 9 ½ sacks and 16 tackles for losses. Those figures rank among the best in the FCS.

“Size, strength and speed — I mean, everything you look for in a D-lineman, he’s got it,” says Ryan Sawyer, Eastern’s defensive line coach.

“He’s just kind of a physical freak out there,” Eastern offensive guard Ryan Forney says. “He’s amazingly athletic and big and thick. He makes you work really hard when you go up against him.”

Sawyer flatly declares Williams to be the most talented defensive lineman he’s every coached and a potential NFL prospect. Still, Williams has only started part-time both seasons at Eastern because — as he is the first to admit — he does not always play with the proper focus and intensity.

“When he ‘goes’ — when he decides to beat the man in front of him — he is nearly unstoppable,” Sawyer says.

“He took a guy from Cal, their right guard, he bull-rushed him with one hand, keeping his left hand free.

He basically put that guard in the quarterback’s lap in probably under a second and a half. It was something I’ve never seen a kid do.”

Williams, a gentle giant off the field, says he’s aiming for bigger things for himself and his team in 2010. And yes, that includes Eastern’s first national championship.

No matter what Williams and the Eagles accomplish next year, it will be difficult to top the 2009 season for sheer perseverance in the face of adversity. At the FCS level, the playoffs are the golden carrot dangling in front of all. For nine months, the NCAA hid the carrot from the Eagles.

“We never knew if it wasn’t going to be [successfully] appealed, so why waste the season and then have it granted to us, and we don’t have the record to go to the playoffs?” The Eagles kept up their end of the bargain, and they were duly rewarded. Williams can’t wait to do it all over again next year — hopefully with a lot less mystery and suspense.