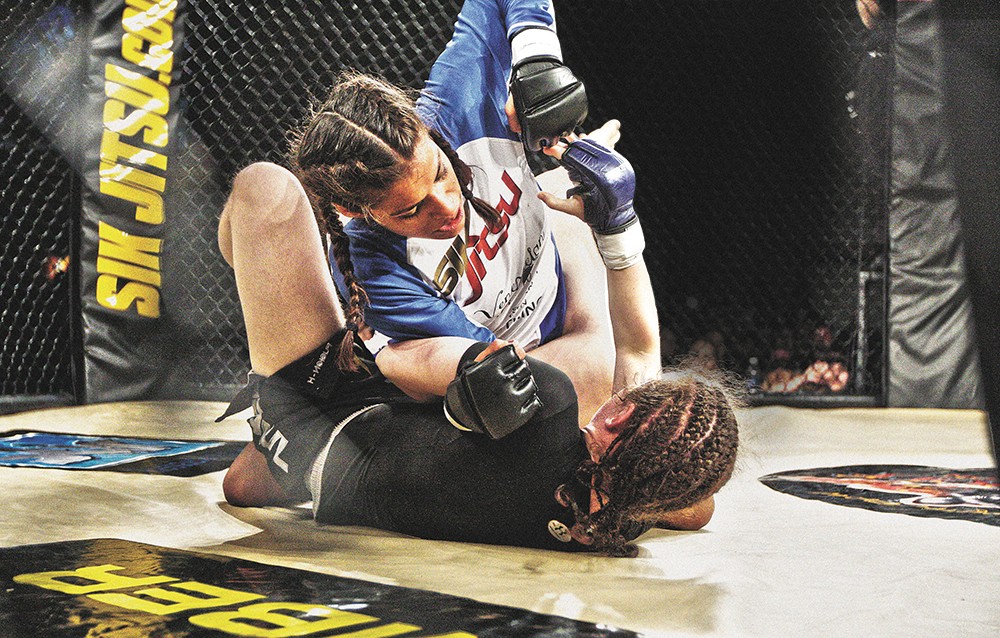 Young Kwak
Julianna Pena fights an opponent in 2011 on her journey to the UFC.

Two minutes into the first round,

Julianna Pena slips her left leg under her opponent's ankle. The momentum slams them both back onto the mat with a heavy thud. Pena quickly swings herself around to straddle her opponent, a 36-year-old former boxer, and rains fists and elbows onto her head. Pinned down and helpless, her opponent struggles to push her off, but the blows keep landing. With one second left in the round, the referee dives in, pushes Pena off and it's all over. Pena appears dazed as she moves to the edge of the octagon cage, high-fiving her training partner and fellow Spokanite, Elizabeth Phillips.

The brutal victory lands Pena a $100,000 contract with the Ultimate Fighting Championship, known as the major leagues of mixed martial arts. There are fewer than 50 women on a UFC roster that includes more than 500 male fighters. Pena, 25, was joined in June by Phillips.

For a young sport — the first UFC event was held in 1993 — equal opportunities for women came much later. As the dominant event promoter and employer of professional fighters, the UFC allowed women into the cage only last year, hosting its first female match in February 2013.

Regardless, attention toward female athletes in this male-dominated sport is rising around the world. Early to the party, Spokane's two up-and-coming female fighters are helping to put this international sport on the map.

This Saturday, Phillips, 28, is set to wake up in Macau, China, for her second UFC match, against another recent women's bantamweight (135 lbs.) signee, Russian fighter Milana Dudieva. Phillips has been training twice a day, at least five days a week for months. She'll get up early to get her tight brunette curls braided into tiny cornrows so they stay secure during the fight. Then she'll fight while her hometown is still asleep, at 3:30 am Pacific time.

Adopted as an infant with her half-sister, Kathryn, Phillips and her sister were raised in the small north-central Washington town of Omak. She was a hard-working, three-sport high school athlete and then ran track at Eastern Washington University, but remembers being labeled a "wild child." During middle school she started getting into fights "over stupid stuff — pointless, stupid shit, stuff that didn't matter," she recalls. That aggressive trait got her into more trouble after high school, and she served four months in 2011 at Geiger Corrections Center for assaulting her now ex-boyfriend. When she got out, Phillips was determined to make some changes, re-enrolling in classes to finish an exercise science degree at EWU. Around then, at the encouragement of a friend, she also began training in mixed martial arts. The sport has since become a positive outlet for stress and anger, though Phillips believes she's also left those rowdier days behind as she's matured.

"I'm pretty calm now, and I don't know if that's because I started doing MMA," she says, laughing.

On a Thursday afternoon in a North Spokane

coffee shop, Pena's appearance contrasts with her tough, boyish fight-night attire of a T-shirt, trunk-length shorts, padded gloves and cornrowed hair. Today, her long, brunette waves hang loose down her back. She has light makeup on behind aviator sunglasses, and dangly, beaded earrings hang above her rhinestone-embellished Affliction brand top. Suddenly, she's interrupted by a starry-eyed group asking for a picture.

"Yeah, absolutely. No problem," she replies.

"My dad is going to be so impressed," one of the young women says.

"I admire you so much," a heavyset guy in the group confesses as Pena stands between them. "I used to be a wrestler."

Such attention has grown since Pena landed her contract by winning the UFC's reality show, The Ultimate Fighter, last fall, allowing her to leave a part-time job waiting tables to train and fight full-time.

Growing up the youngest of four siblings, Pena remembers that her Venezuelan-born dad was not so pleased at her decision back in 2008 to start training in MMA.

"When I first started, he was begging me to quit," she says.

After seeing their daughter's intense dedication to the sport, Pena's parents and family have grown supportive of her risky career, especially through her ongoing recovery from a major knee injury in January. Weeks before her second UFC fight, Pena tore her meniscus and three of the main ligaments in her knee in a training incident. The UFC flew her to Los Angeles for surgery. It could have been career ending, but she's just been cleared by her doctor to slowly work back into a training routine.

Pena is impatient to get back into the cage. Her fierce passion to succeed in this sport is only magnified by her boisterous personality. She's loud — patrons at the coffee shop can hear her every word and glance over when her voice rises in excitement, and they hear her describe a win as a kill, and a loss as a metaphoric death.

"I respect all women who get in the cage, but I have no choice but to make it personal when I fight. I have to think, 'This bitch stole my lunch money and my grandma's pearls and she is going to die,'" she says.

On a recent sticky summer night,

coach Rick Little leans against an unpainted sheetrock wall lined with thin mats and watches Phillips dance around the gym, sparring with a young male fighter about her size. Each time her white glove jabs out toward him, she lets out a quick rush of air from her mouth: psssh! There's no air conditioning in the north Hillyard warehouse/converted gym, and there's not much of a breeze coming through an open garage-style door. The room is heavy with the stench of sweat.

Little has produced four of the UFC's current professionals. Before Pena and Phillips, Spokane natives Mike Chiesa and Sam Sicilia made it to the octagon, helping to bring recognition to Little's gym, Sik-Jitsu, and his training technique.

"Rick is the best coach I've ever had. No one else has believed in me like him," Phillips says.

Unlike some big gyms in the U.S. that produce multiple pros with staff coaches to teach the individual disciplines that make up MMA — boxing, wrestling, jiu-jitsu — Little is the only coach for these four fighters.

He spends about four hours a day watching MMA fights online to find techniques to teach his own athletes, and he's been involved in MMA in some form — as a fan, athlete and coach — since its beginning. After high school, Little went to train with champion fighter Royce Gracie for as long as he could afford — seven months.

As Phillips goes for another three-minute sparring round, Pena stands over a pair of young women grappling in a corner. She barks directions. One of them, Mariah Pierce, a 15-year-old junior at Mt. Spokane High School, is there in part because of Pena.

"Julie is my number one inspiration of the kind of woman I want to be," Pierce says. "This is something I want to go big with."

Women have been fighting professionally

in MMA almost as long as the sport has been around, through smaller U.S. organizations and in Japan. But it took nearly 20 of those 21 years for the UFC to let women into its cage, which came not long after its president Dana White said he'd never let women in. It was the currently undefeated women's bantamweight champ, Ronda Rousey — a feisty, smack-talking Olympic judo bronze medalist — who changed White's overall perceptions of women's role in the sport.

"Julie and Liz are violent females," Little says. "Like Ronda, they're trying to hurt their opponent the whole time. They're not trying to out-point them, they don't think of the judge, me, their mom — they are looking at their opponent and trying to inflict damage. That is what it truly, to me, takes to win in this sport."

Because of the uncharted territory female MMA athletes face, Pena calls this the "golden age."

"We wouldn't be fighting in the UFC if it weren't for Ronda. She is a staple in the sport as far as getting women on the mat," Pena says. "We're the Muhammad Alis and Joe Fraziers of our time, and I hope in the future there can be little Floyd Mayweathers and Manny Pacquiaos running around after us."

As more women take up professional fighting with the UFC — the organization recently announced the addition of its new women's strawweight (115 lbs.) division — Pena and Phillips see limitless opportunities for themselves and other women in the sport.

Ask Little what's next for his female stars, and he's firm in his belief that Pena is going to be the one to knock Rousey off and become the women's bantamweight champ.