Spokane County Sheriff Ozzie Knezovich has threatened one of his most persistent critics with a defamation lawsuit, and not for the first time 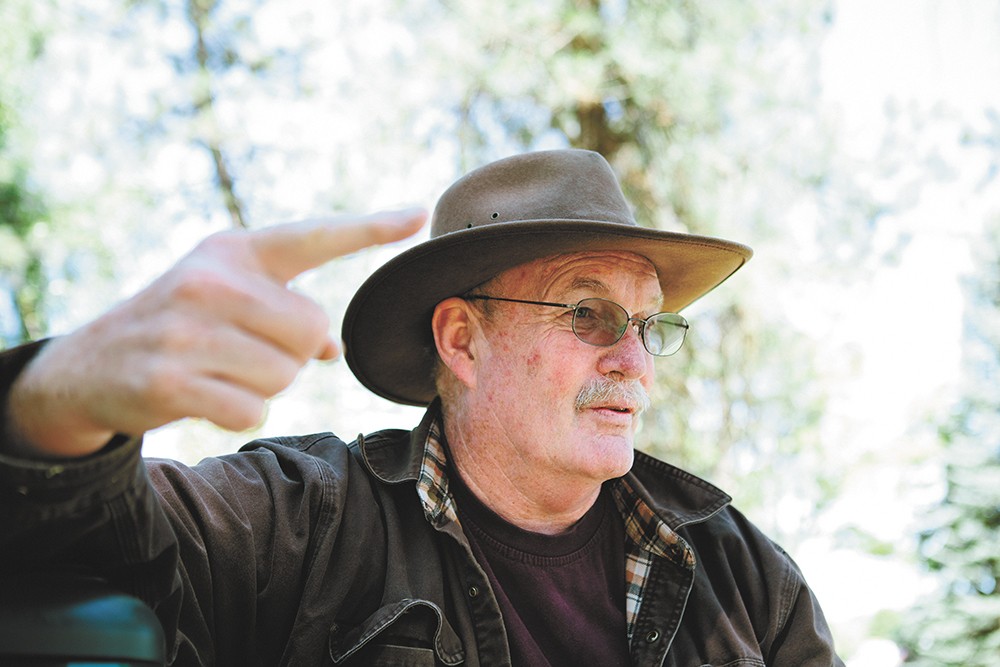 Kristen Black
Ron Wright: “I expect a certain level of professionalism in law enforcement, and I’m going to call a spade a spade.”

Ron Wright sometimes gets it wrong.

Throughout the past eight years, the 64-year-old retired detective from California, who calls himself Ron the Cop, has cast a critical eye on high-profile police investigations via blog posts, email blasts and in some cases, face-to-face conversations with the Spokane County sheriff.

He's accused detectives of lying on warrant affidavits and criticized leadership and disciplinary decisions made by local law enforcement. Wright says he offers his criticism to improve local law enforcement, though at times he wanders into conspiracy, and according to Spokane County Sheriff Ozzie Knezovich, flirts with defamation and libel.

Indeed, in May, Wright fired off an email condemning a citizen review board for not properly considering certain facts in the death of Ryan Holyk, a Spokane Valley teen who died of head injuries in June 2014 after crossing paths with a deputy's speeding SUV. Wright also chastised the board for not making any training and policy recommendations in light of the teen's death.

But Wright, who hadn't fully reviewed all the facts beforehand, was simply wrong.

And while he quickly corrected his misinformation, Knezovich had had enough. The sheriff forwarded Wright's email to lawyers in the county's Civil Division to consider bringing a defamation lawsuit.

It's feistiness like this that have some calling Knezovich the "Bully Sheriff" who overreacts to criticism. For Knezovich, who says he's spent numerous hours correcting Wright's misinformation, it's about accountability.

"If I'm doing something unethical, I'll take my lumps, but don't expect me to sit back and let that happen to other people," Knezovich says. "It's not right, it's just not. Maybe that's the difference between me and some of the other electeds, but this is wrong, and I'm tired of it."

Wright, to his credit, has been quick to correct some inaccuracies over the years, yet he holds fast to most of his conclusions.

"I have made mistakes in the past, but when things are brought to my attention where I have misquoted or misrepresented anybody, I've immediately acted and corrected it," Wright says. "I find it chilling that a public servant would make the inference that such public critique is tantamount to libel."

There's a folder in Knezovich's email

inbox reserved specially for Wright. It contains thousands of emails. Knezovich scrolls through some of them, in which Wright accuses public officials of covering up aspects of the death of a woman who fell five stories from the River Park Square parking garage when her car broke through a barrier in 2006.

And in 2011, Wright and former Undersheriff Dave Wiyrick accused Spokane County detectives of lying. Those accusations led to a seven-month investigation into the detectives, all of whom were cleared of wrongdoing by a Sheriff's Office internal investigation.

Afterward, Knezovich went after Wright and Wiyrick, who is now a contender for a vacant seat on the Spokane Valley City Council. Knezovich asked former County Prosecutor Steve Tucker to charge the men with lying to a public servant. Tucker declined to file charges, saying the case amounted to a he-said-she-said squabble, according to internal police documents.

"When somebody brings serious accusations like that, it's something we can't ignore," he says.

Wright is certainly not alone in his criticisms of Knezovich.

"He has some thinner skin than most elected officials," says Rick Rydell, a longtime conservative talk radio host who has debated with Knezovich on-air. "I don't know that I've seen anyone as hypersensitive to detractors. Democrat, Republican, whatever, there's always another side to the story."

Then there are the criticisms of his office, such as the call for independent oversight last September. Rick Eichstaedt, executive director of the nonprofit law firm Center for Justice, joined other activists in presenting a petition in support of that effort.

"[Knezovich] perceived we were attacking him, and that wasn't the case at all," Eichstaedt says. "I think Ozzie's done a good job, but all law enforcement needs independent and credible oversight."

Knezovich, for his part, says he was disheartened to be presented with a petition rather than trying to find a solution through dialogue.

In his own haste to correct Wright

, there are times when Knezovich can get it wrong, too.

In 2015, Wright sent an email — again, partly inaccurate, but eventually corrected — regarding a settlement between the Spokane County Jail and a family who claimed that their son, Danny Lee, was denied medication while incarcerated. This time, both Knezovich and then-Spokane County Commissioner Todd Mielke responded to Wright, themselves misstating key facts.

That's when Jeffry Finer, Lee's attorney, felt compelled to weigh in with his own corrections.

"It's very unbecoming after a settlement to read that the other side is massaging the facts to try to look good, and then claiming if this had gone to trial the truth would have come out," Finer says now. "So I did take the time to write and disabuse the sheriff and Mielke of their misinformation."

He adds that Mielke apologized, but the sheriff has not.

"Wright was quick to correct the record," Finer says. "And I look forward to the sheriff doing the same."

He adds that the constitutional sheriffs' movement and pressure from extreme right-wing conservatives has put Knezovich is in a difficult position when it comes to criticism.

"Sheriff Ozzie has my utmost respect in that regard. The counties that have constitutional sheriffs are going off the rails in terms of legality. I think it is a terrible threat to minorities in particular," Finer says. 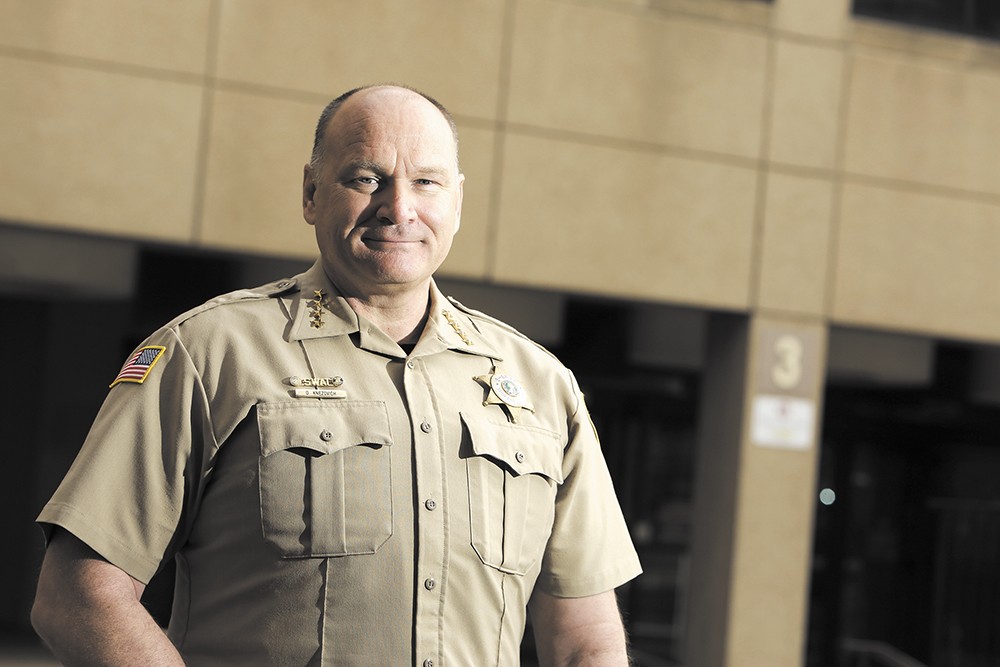 For all their battles,

Wright and Knezovich share a few traits. Both have dedicated their careers to law enforcement, and espouse honesty as an essential pillar of the profession. They share a disdain for abuse of power and are quick to call out injustice. Each is dogged in defense of his opinion.

Knezovich has marched down to local media outlets out of frustration over their coverage. Wright says he stands by his accusations of dishonest cops and cover-ups throughout the years.

The rift between Knezovich and Wright raises a couple of questions about freedom of speech and the power and responsibility of the government. First, how long can a citizen put out inaccurate information without facing consequences? The answer, according to local attorneys and long-established case law, is essentially forever.

That's an extremely difficult threshold to reach, Finer says. Knezovich would have to prove that Wright — or anyone else — is making intentionally false statements with evil intentions.

"It doesn't strike me as an appropriate political response," he says, questioning if the suit would be a good use of government resources.

The other question facing Knezovich: What is the appropriate response to criticism?

Other law enforcement leaders in the area join Knezovich in his frustration, though some question whether legal action is appropriate.

"When it gets to where it disrupts the operations of a public office, then you have to use the resources you have at hand," says Kootenai County Sheriff Ben Wolfinger. "I think Ozzie is doing the right thing by seeking counsel on it. You have to do what you have to do to make sure your office is running smoothly."

"In my opinion, Ron is an example of a modern-day activist," he says. "People march and protest now with social media and blogs. You could probably hire two to three people full time to figure out which complaints and criticisms have merit. I think sometimes you dismiss those concerns at your own risk."

Indeed, the threat of a defamation suit against Wright seems an empty one. Yet Knezovich has done it before, and as long as Wright continues, in all likelihood he'll do it again. But for all his inaccuracies, Wright is lending his 20 years of law enforcement experience to an essential function: police accountability. For example, his stance in Holyk's death, that the Sheriff's Office and the deputy are not free of blame, is supported by local attorneys.

"I stand by my report [in that case], and I fault the leadership," Wright says.

"I think it's important citizens know the truth," says Knezovich. "They're making these false statements publicly, and I take extreme exception to people putting out false information about my deputies. It's not right, and it's defamation of character." ♦