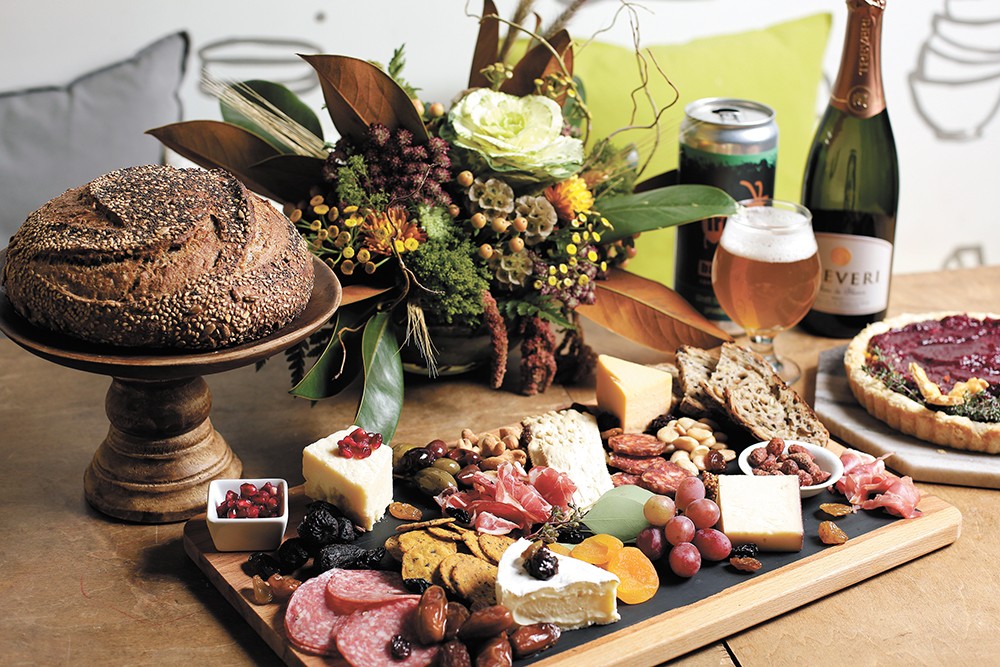 Young Kwak
Festive, locally made food and drink is not hard to find. Shown here is a Turkey Red wheat loaf from the Grain Shed, Bites & Treats Catering's charcuterie board, Iron Goat Brewing Co. beer, a tart from A Small Batch, wine from Treveri Cellars and a floral arrangement from Parrish & Grove.

As you gather with friends and family this holiday season, let the agricultural bounty of our region speak for itself. Bringing together a collection of locally sourced and made products to your dinner table — those suggested here and many more — is much more than a great "humble brag" to out-of-towners unfamiliar with the Inland Northwest's many quality producers. It's also a way to honor the truest roots of holiday celebrations: sharing food lovingly made, reflecting on all that we're grateful for and appreciating this place we call home. (CHEY SCOTT)

For families with any number of Cougar alumni (or even none), there's little doubt that someone will bring along a tin of the famously delicious COUGAR GOLD CHEESE to share. The world-famous cheese — a rich white cheddar made at the Washington State University Creamery in Pullman — is what some of the best queso dips, mac and charcuterie boards are made of. Aged for just over a year before selling fast anywhere it's retailed, Cougar Gold keeps getting better with age, becoming more crumbly and sharp the longer it sits. While the WSU Spokane Bookie is sold out until January, the store does have a couple other flavors ($29/each): the American-style natural cheddar and the Viking, a semi-soft cheese comparable to Monterey Jack. All flavors, including the Gold, can also be ordered online for $22 each, plus shipping, at cougarcheese.wsu.edu. Local customers can also try their luck at YOKE'S FRESH MARKET (all regional stores' delis stock it for $35) and ROSAUERS (the South Hill and Five Mile locations both have some as of this writing for $30). (CS)

In a region where cups overfloweth with award-winning wines, one of the best and easiest last-minute ways to showcase the area's local producers is a bottle of wine. There are nearly limitless choices, but a few local winery go-tos include MARYHILL WINERY, which celebrates the first anniversary of its Kendall Yards tasting room with a party on Saturday, Nov. 17, and BARRISTER WINERY, with two downtown locations; a satellite tasting room and main winery.

For wines from a little further afield, NECTAR WINE & BEER owner Josh Wade suggests a few Central Washington wineries' products that are regularly stocked at his Kendall Yards store. Wade's first pick is Yakima-based Treveri Cellars' sparkling wine, made in the methode champenoise style (the last stage of fermentation happens in the bottle), and available as a white or rose starting at $12. Wade's pick for a red wine that pairs well with big holiday dinners is Renegade Wine Co.'s pinot noir ($23). He also recommends Col Solare Winery's cabernet sauvignon ($60). "This is the 20th anniversary of this wine. It is always a crowd favorite and consistently scores 94 points and above by wine critics and magazines," he notes. (CS)

Obsessive craft beer drinkers can be hard to please, but we've got it covered with the following local beer recommendations — even for that obnoxious cousin who won't shut up about the difference between a West Coast IPA and a hazy IPA.

First up, something light; a refreshing hefeweizen. This low-alcohol German wheat is a great pairing for a pre-dinner charcuterie board. We recommend the Bavarian Hefeweizen (5.5 percent alcohol-by-volume) from Spokane's WHISTLE PUNK BREWING. It's available at the brewery's downtown taproom to go in 32-ounce crowlers. Bread or feta cheese can help enhance the beer's spicy notes.

Next on our menu is a farmhouse saison, a solid pairing for roast turkey or honey-glazed ham. Try IRON GOAT BREWING CO.'S 2nd Avenue Saison (6.4 percent), which is available to go in 32-ounce crowlers at the downtown taproom. It's a rustic ale for a rustic dish. Spice things up by adding some garlic and herbs to your bird for flavors that complement the floral hops in the beer.

Now it's time for pie. Traditional pumpkin pie goes hand-in-hand with a coffee porter. Go for something a little different and grab the SELKIRK ABBEY Guilt Imperial Belgian Coffee Porter (8.3 percent). Brewed with DOMA Coffee, it both contrasts and complements the pumpkin's sweetness and pie spices. Find it on tap at the brewery's Post Falls taproom and in 22-ounce bottles at bottle shops throughout Spokane and Coeur d'Alene. (DEREK HARRISON)

Even though it seems counterintuitive before sitting down to a big meal, there's nothing like grazing on appetizers and sipping something boozy in the kitchen as each dish comes together. Flavorful, protein-rich charcuterie boards are an ideal snack to whet palates without taking up too much room in your belly before dinner. Angela Schutz's growing Spokane business BITES & TREATS CATERING is making the art of charcuterie easy by offering pre-made boards of cured meats, cheese, nuts, fruit, spreads, breads and more for pre-order and pick-up from the Nettleton Street Indaba Coffee Roasters the day before Thanksgiving (Nov. 21 from 5-7 pm) and again before Christmas. Orders ($45/board) must be placed by Sunday, Nov. 18, for Thanksgiving, and by Dec. 20 for Christmas, at smallbitessweettreats.com. (CS) 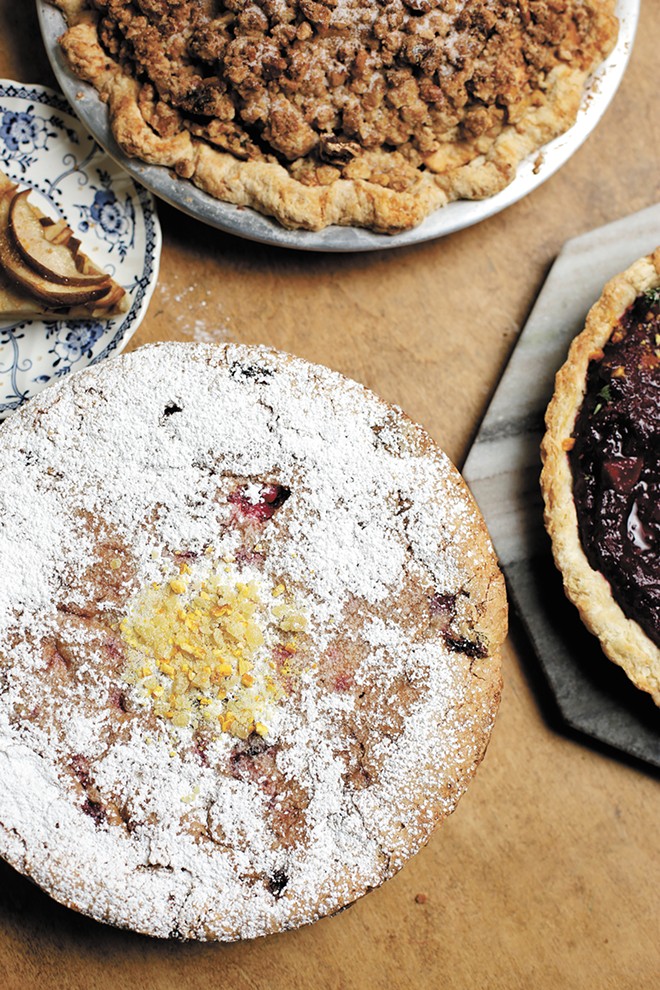 Carbs don't count during the holidays. So make sure to load up on bread, rolls, pastry and more from THE GRAIN SHED in Spokane's South Perry District. Owner and baker Shaun Thompson Duffy of the Co-op's Culture Breads says customers can pre-order a long list of baked goods made from fresh-milled flour that was grown just miles away on the Palouse. Holiday pies ($35), a maple pumpkin and cinnamon pear apple, are made with Sonora wheat crusts, which Duffy says have a distinct flavor and hold up well to baking. The Grain Shed is also selling brioche dinner rolls by the dozen ($13), along with sourdough ciabatta ($8) and croissants ($3-$3.50/each). The bakery's signature, naturally leavened, wood-fired loaves ($8-$10) make for great sandwiches to hold together tasty leftovers. Duffy recommends the lunch box loaf (also great for French toast, he notes), Egyptian barley bread and seeded Turkey Red. Pre-order any baked goods, including specialty rolls and pies, by calling 241-3853 or emailing orders@thegrainshed.coop. Home bakers can also reserve 1-kilogram bags of 12 varieties of freshly milled flour ($7/each). Orders need to be made by Sunday, Nov. 18, and will be ready for pickup on Wednesday, Nov. 21, during regular business hours, between 7 am and 9 pm. (CS)

If baking isn't your culinary strength, consider leaving cake, pies and other sweets up to the pros. A SMALL BATCH (formerly Batch Bakeshop) in Spokane's West Central Neighborhood is taking pre-orders for several baked treats to share with friends and family Thanksgiving weekend, and is hosting more pop-ups next month. Pre-orders for Thanksgiving are open until the end of day Friday, Nov. 16, for five featured desserts: a roasted plum brown butter tart ($30), old-fashioned pear galette ($25), cranberry crunch cake ($20), pumpkin butterscotch cream pie ($35) and a gluten-free apple cheddar walnut pie ($35). Pickup for pre-orders is on Nov. 21 (12-4 pm) and Nov. 22 (10 am-noon). Batch is donating $2 from each pie to the nonprofit Salish School of Spokane. If you miss pre-orders, or need to boost your treat inventory, Batch owner Mika Maloney says the shop will have extra baked goods on hand for walk-in customers during pick-up hours, along with some last-minute hostess gift options.

Among the many bakeries of the Inland Northwest offering special holiday treats, MIFLAVOUR in downtown Spokane is also taking pre-orders for Thanksgiving until Monday, Nov. 19 (Christmas order cutoff is Dec. 17), for a couple of pies (apple and pumpkin cream cheese; $45/each) and tarts (pear or pecan; $25/each) and its signature macarons in seasonal and traditional flavors. (CS)

Don't forget to adorn your table — or show appreciation for a host — with a creative centerpiece from one of the region's many floral shops. At PARRISH & GROVE BOTANICALS in downtown Spokane's Saranac Commons, options abound. The shop's custom floral arrangements, which for Thanksgiving must be placed by Sunday, Nov. 18 (for Christmas by Dec. 20), start at $40. Florists will create fresh arrangements using many festive, seasonal plants and blooms, like mums, berry branches, evergreens, yarrow and cockscomb. After Thanksgiving, also look for locally grown poinsettias, along with Christmas cactus, Norfolk Island pine, amaryllis bulbs and lots of year-round house plants. If you're in a rush and didn't pre-order, Parrish & Grove stocks fresh, seasonal bouquets to display in any vase. Want to make your own table arrangement? Sign up for the shop's Thanksgiving table centerpiece workshop ($50) on Saturday, Nov. 17, held during the store's second anniversary weekend, which includes 10 percent off all purchases, including pre-orders. A wreath-making and wine-tasting workshop ($50) is also coming up on Dec. 16. Register at parrishandgrove.com, and call 838-7784 to place an order. (CS) ♦

The original print version of this article was headlined "Beautiful Bounty"