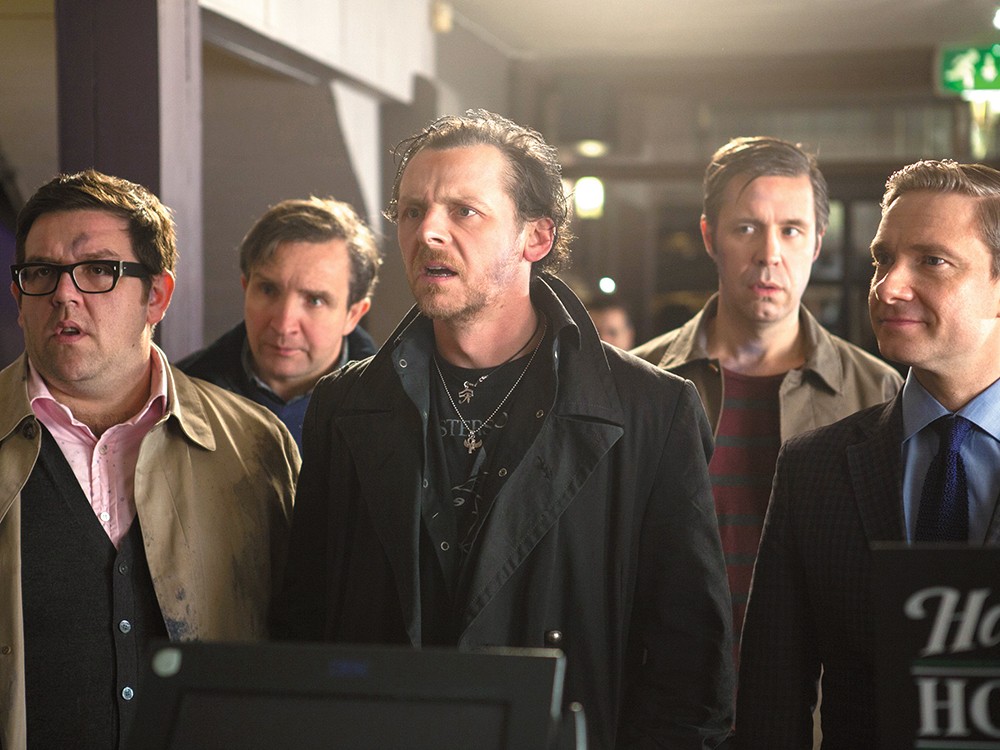 Simon Pegg (center) is back at it again in The World\'s End.

In closing out their “Cornetto Trilogy” that commenced with 2004’s zombie satire Shaun of the Dead and continued with 2007’s buddy-cop send-up Hot Fuzz, writer-director Edgar Wright and writer-star Simon Pegg suggest that underachievement and delusion aren’t attributes that age particularly gracefully. However, as these lesser qualities fester, they become even better fodder for potent, biting comedy.

As the titular Shaun nine years ago, Pegg perfectly embodied a man-child who’d woken up one day to suddenly find himself on the wrong side of 30 and in possession of precious little time to get his shit together. As Gary King in The World’s End, Pegg plays a sad-sack fortysomething for whom that window has seemingly already closed, leaving him with no option other than to take solace in past glories and live life as if encased in ember.

Demonstrating his customary visual flair (which includes a remarkable knack for bringing fluidity and rhythm to his hyperkinetic compositions), Wright acquaints us with our antihero’s finest hour. Fittingly, it was a failure. Setting out on a “heroic quest” 23 years earlier, a teenaged Gary and four friends attempted a 12-pub/12-pint crawl that saw them fall well short of the last hurdle. When Gary is revealed to be gleefully recounting this story to his recovery group, we’re reminded of Wright and Pegg’s ability to lead us to the brink of cliché — in this case, a narrated flashback sequence loaded with exposition — only to uproariously subvert our expectations.

Determining that he has unfinished business in his hometown, Gary suits up in his vintage Sisters of Mercy T-shirt, Doc Martens and duster and convinces his estranged friends to take another crack at conquering “The Golden Mile.” Soon bound for sleepy Newton Haven in Gary’s beater are teetotaler Andy (Nick Frost), posh Oliver (Martin Freeman), emasculated Peter (Eddie Marsan) and the unflappable Steven (Paddy Considine).

Whereas Scott Pilgrim vs. The World saw Wright load every frame with as many visual gags as he could envision (leaving them the cinematic equivalent of a comic book panel), The World’s End finds him employing considerable restraint. Without sacrificing any laughs, the film initially places its focus squarely on its well-drawn characters. In turn, Frost reminds us what an underrated actor he is as he conveys Andy’s conflicted feelings towards a friend who’s devolved into little more than a caricature. Meanwhile, Gary’s arc appropriately follows the trajectory of a bender, with his initial delirious enthusiasm ceding to something much darker and more desperate.

The film likewise takes a turn. And while anyone familiar with its premise might be prepared for its segue into a sci-fi paranoia flick inspired by The Stepford Wives and Invasion of the Body Snatchers, they can’t help but marvel at how skillfully Wright and Pegg orchestrate this transition. Too busy lamenting how Newton Haven’s once character-rich pubs have become interchangeable corporate establishments, the friends’ regard for their former neighbors is so low that they don’t realize they’ve been replaced by automatons. This ultimately comes to light during a centerpiece bathroom brawl that puts the boots to more butt than all of Kick-Ass 2’s fisticuffs combined.

In fact, there are few “action” directors who can choreograph melees with the same inventiveness and exuberance as Wright. The brilliance of his irreverent genre-skewering is that he also possesses the technical prowess to beat blockbusters at their own game. He understands that lampooning Hollywood conventions needn’t keep you from staging some of this year’s most memorable set pieces. Ultimately, The World’s End is every bit as defiant as its lead rabble-rouser, refusing to align itself with the mindless ranks that have overrun our multiplex screens. It’s precisely that sort of resistance effort that gives a movie-lover hope.