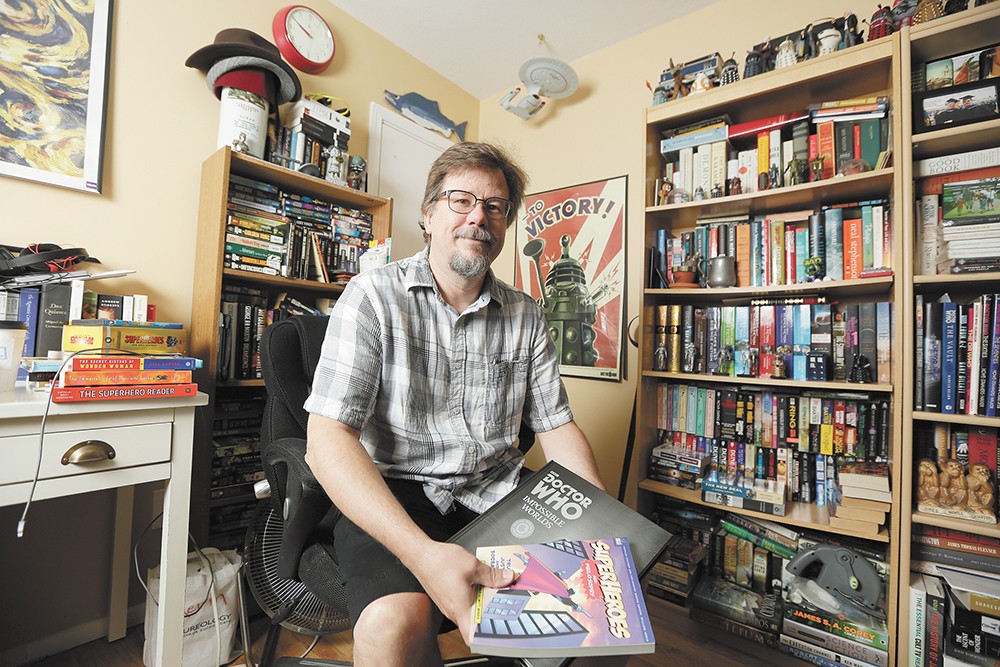 Young Kwak
EWU professor Kevin Decker authored Who is Who?: The Philosophy of Doctor Who and other books exploring pop culture and philosophy.

Some people take TV shows and movies too seriously.

For me, it was The Matrix. I became so enthralled with the movies as a kid that it became the baseline for all of my adolescent views on philosophy. I would say things like "None of this is even real, man."

For Kevin Decker, a philosophy professor at Eastern Washington University, it was classic Star Trek. Unlike some other shows during the '70s, Star Trek was about more than "flash and explosion," he says.

"Every Star Trek episode was a mini-philosophy or mini-ethics lesson."

For Decker, pop culture is a vehicle for helping people understand and engage in philosophical discussions, and he uses that to his advantage in the classroom. He also writes and co-edits books examining culture through a philosophical lens.

Take, for example, Star Wars. Decker co-edited a book called The Ultimate Star Wars and Philosophy. Students love Star Wars, and he uses their interest in The Force to discuss mythological and metaphysical theories. He says it's easy to see several philosophical theories reflected in the movies, and in particular, in different characters. Han Solo, for instance, is what you'd call an empiricist: If he can't see it or feel it (The Force), then it doesn't exist to him. That allows students to engage in a broader discussion.

It's an approach that may become more common as certain pop culture mediums, like TV, have introduced more philosophical theories into writing and have become more accepted by "highbrow" culture.

Decker says that his own roots

in philosophy are more mundane. He got started with more traditional philosophy, earning his doctorate at St. Louis University, and writing his dissertation on John Dewey, an American educator and philosopher.

He and a couple of other St. Louis graduates were inspired to examine pop culture and philosophy more by William Irwin, series editor of Wiley: The Blackwell Philosophy and Pop Culture Series. Now, Decker is an editor for the series and contributes to some of its books.

Some in the field criticize injecting pop culture into philosophy, believing it's a superficial dumbing-down of philosophical theories. Decker says this comes down to a divide between high culture and low culture. The criticism, he says, is tied to the view of philosophers that there are simply non-philosophical aspects of culture that offer no ability to search for truth through methods of logical and conceptual analysis. But Decker argues that culture itself can be explored philosophically for more understanding.

"It's that broader conception that I endorse," he says. "It's certainly not as specialized and not as rarefied, and not as targeted to conclusions ... but that doesn't mean that it's any less valuable, in my opinion."

The transformation of television from something considered to be low culture decades ago, into, at worst, "middlebrow mass consumption and mass art," offers more opportunities for philosophical exploration, Decker says.

Decker is writing a chapter for a book he is co-editing called The Philosophy of Breaking Bad, which should be released this fall. Some of the book focuses on a sequence of events in the show (spoiler alert; but really, watch Breaking Bad), in which Walter White allows Jesse's girlfriend, Jane, to choke to death. That leads Jane's dad, an air traffic controller, to cause a plane crash that kills 167 people.

It raises a question of moral responsibility. One chapter of the book, written by another author, argues that Walter is completely responsible for the plane crash. Decker, in contrast, says that assumes Walter has too much freedom to change events. Decker bases his argument on an existentialist theory of "facticity" — that our freedom is constrained by what we can't control.

This kind of analysis is more common now than it was decades ago because of the evolution of TV, Decker says. The intention is no longer to merely keep people's attention from week to week.

"I think that's lending itself to better and more philosophical TV," he says.

When Decker came to EWU

in 2005, the philosophy department didn't have any majors. Now, at any given time, it has between 35 and 50 students who major in philosophy. He hopes that means more are going into graduate school, law school or politics.

Decker, as the former faculty president, has been involved for the past six years in the effort to reform general education at EWU. Part of that involves improving first-year experiences for students. Many students do better in college if they start with courses that are of high interest, and hone skills that will help them through their academic career. He will teach a class to first-year students about superheroes, how they have evolved and what it means for our culture.

He notes that there have been paradigm shifts in philosophy throughout history, where people import something considered unphilosophical into the field. Using movies and TV shows for philosophical purposes is not so different, and it's an approach that may be working.

"I think it is connecting a lot with students now," he says. ♦