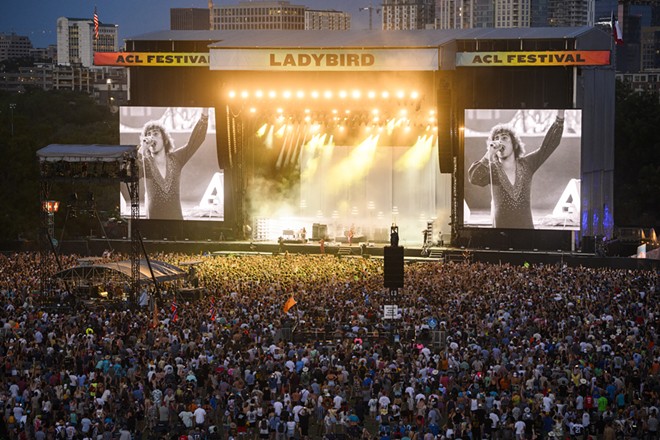 OK, so here's the thing: I know that music festivals can be super cramped, stinky, sweaty, overstimulating places for a lot of people. There are usually thousands of people there, you basically have to be a venue sleuth to find the porta-potties least likely to run out of TP, and there are lots of chances to spend way too much money on food, merch and drinks.

But I love it.

I love the experience of feeling a performance (both figuratively and literally thanks to loudspeakers) in the company of perfect strangers.

I love looking around after a good beat drop and seeing the same stupid smile I'm wearing on the faces of other humans around me. I love when an artist gets an audience of 10,000 or more people to shut the hell up long enough that you can focus on a beautiful, quiet moment together.

I also love that festivals encourage you to find new artists, whether they're in a genre you already love or one you don't listen to as often.

After COVID-19 forced a drought of performances, I recently undertook the insane catch-up task of attending two weekend-long festivals in a row. Of course we had artists we made sure to see, but for those gaps in our schedules my friends and I followed the music and found some new-to-us gems that are well worth the listen.

We could've gone down to the main stage at Beyond Wonderland at the Gorge to see the Chainsmokers, but once GG Magree started up on the bass-heavy stage where my group was already planted, there was no tearing us away from Magree's set. As a DJ-singer who happens to be from Australia, Magree reminded me in some ways of one of my favorite EDM artists, Alison Wonderland. But Magree has a somewhat darker edge to her style that was particularly mesmerizing in a live setting. Try "Nervous Habits" or keep an eye out for live shows, where she truly shines.

Bijou, a "G-House" artist, has collaborated with Dr. Fresch, whose hip-hop and rap remixes are branded as "Future Ghetto," with driving house and trap beats. Both artists played great sets at Beyond Wonderland on the smallest stage. Try their collaboration "Hello" (it's explicit), or Dr. Fresch's "Fire."

I'm apparently turning into an uncool older person who doesn't keep up with new artists anymore, because an artist that was totally new to me at Austin City Limits (ACL) is kind of a big deal. We decided to check out this quartet of three brothers and a friend calling themselves Greta Van Fleet after learning that their set during the first weekend of shows was lauded as a must-see performance. Boy, was that accurate. Watching this band is about as close to watching Led Zeppelin as you're gonna get, with some hints of flair that harken to Queen. Incredible vocals, great music and nostalgia-feeding fun. Try "Light My Love" or "Stardust Chords."

Toward the end of ACL, we knew we wanted to see two larger artists to round out the festival, but we had a break between sets. That's when the soulful sounds of Jon Batiste might have captured our hearts, had we not seen the lights and heard the intro to Madeon on another stage nearby. Following a crowd of dance-music lovers, we were introduced to this French DJ-singer and his upbeat electropop. Try "Dream Dream Dream" or "All My Friends." ♦