It’s not just late breakfast, and it’s not a buffet. So what is it? 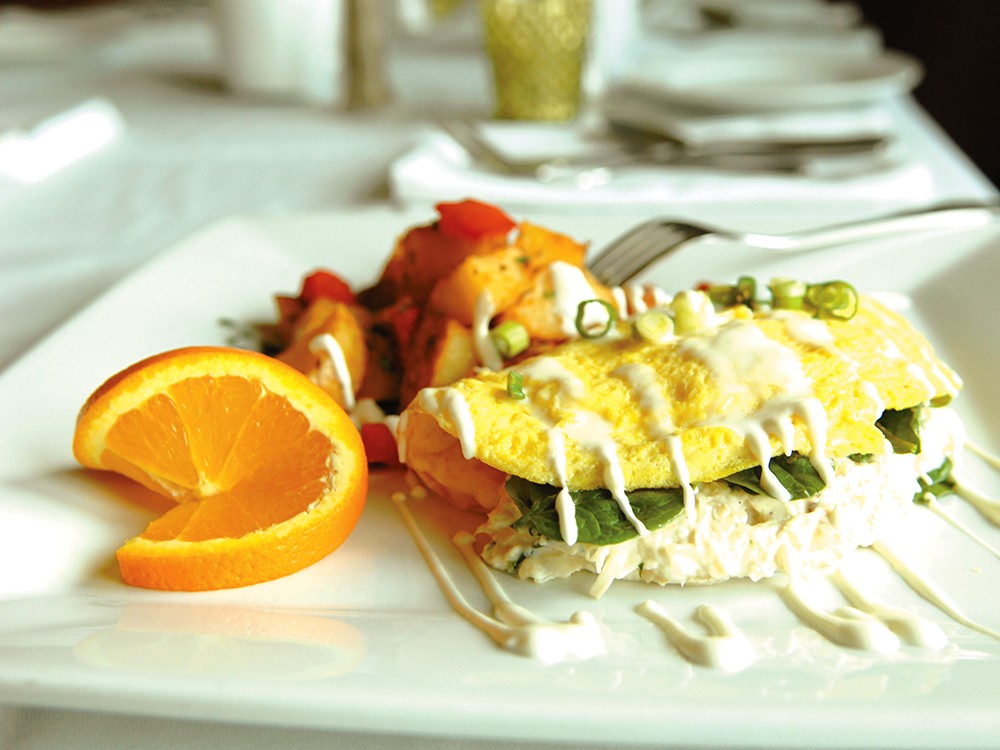 Outside, the streets are Sunday-morning quiet. But inside, the kitchen hums and diners sip coffee or something stronger. Colorful omelets and thick pieces of French toast disappear between fragments of conversation. At Saranac Public House, where Sunday brunch quietly started a few weeks ago, sunlight glints off stemless wine glasses filled with pale orange mimosas.

At a modern brunch, you do not have hashbrowns; you have rosemary breakfast potatoes. Your orange juice is freshly squeezed. Your eggs are cage-free. Your French toast is topped with fresh seasonal fruit. Your coffee is made from locally roasted beans — and you’ll stay long enough for a few refills.

In other cities, brunch has attained an almost sacred status. Groups of friends or couples with babies willingly wait in hour-long lines for the weekly ritual. In New York City, where I lived for the past three years, an uninitiated observer could believe that brunch consists entirely of young people standing around on the sidewalk outside impossibly small and crowded restaurants.

But it’s more than that, and with Saranac as the latest in a growing number of local restaurants offering the weekend meal, Spokane may be reaching the point when, on an unhurried weekend morning, the question is not whether to go out to brunch, but where.

“My hope would be that’s where Spokane is going,” says Eric Johnsen, Saranac co-owner and chef. “You’ve got more intimate, smaller settings. It’s not a big trough of food, it’s something crafted.”

Here in Spokane, you can’t bring up the word “brunch” without someone saying “Davenport buffet” in the next breath. And no one denies that’s a wonder to behold; it’s just not what any of the smaller restaurants are aiming for. When Italia Trattoria started serving “brunch,” they fielded so many calls about buffets they stopped using the word.

“We decided to call it ‘breakfast with a little lunch,’ ” says co-owner Bethe Bowman. “But it’s brunch — that’s what it is.”

More than any specific hour, brunch begins, as Clover executive chef Scott Schultz put it, “whenever you roll out of bed.” At Casper Fry, Sunday brunch is always busiest during the two hours after noon.

“We either have the church crowd or we have the sinners, it’s hard to know,” executive chef Joshua Martin says.

But there’s an essential quality of modern brunch that’s a little harder to define. It has something to do with comfort and leisure, and it’s partly because of this quality that brunch — even perhaps more than microbreweries or coffee roasters or gourmet food trucks — is the culinary hallmark of the urban creative class.

The devoted crowd tends toward the young, but the appeal isn’t confined to urban hipster types. Last weekend at Chaps, where owner Celeste Shaw takes pride in a welcoming atmosphere, a young man wearing camo expressed shock that a friend had never been there for brunch before.

And that’s another thing, because that word — love — tends to come up more often with brunch than any other meal. People may have a favorite lunch spot, or enjoy going out for dinner, but only brunch as an entire concept seems to inspire such a deep feeling of affection. Of the many reasons to love brunch, one is paramount: It is served with care.

“It’s not just something out of a box,” Johnsen says of the Saranac brunch. “We’re making everything on the menu — our chicken-fried steak is handmade, our sausage is handmade, our biscuits are handmade. Everything we do is made from scratch just the day before.”

It’s a common credo among the restaurants entering the brunch scene in the past few years, from Santé to Clover to Central Food. Most of the chefs making brunch in Spokane come from a history of brunch places, but their influences often go straight back to childhood, to memories of homemade meals around the family table.

So that’s the secret — sophisticated menus and alcohol aside, modern brunch isn’t fancy. There’s nothing uniquely urban about it. It’s comforting and wholesome, and people with the time and hunger for that level of care will eventually congregate wherever it is being served. Even if the wait is an hour long.

Out for Inlander Restaurant Week: At Clover with Jess Walter