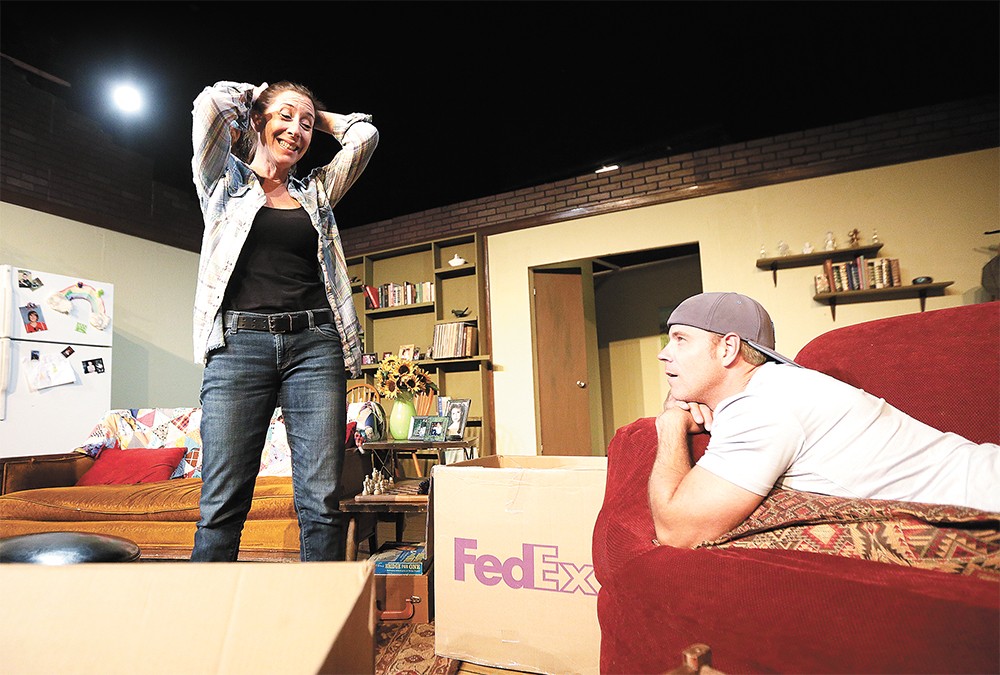 In one San Francisco apartment,

private anxieties and suspicions have pushed a couple to the verge of breaking up. In the place next door, a grandson is setting up a wireless music system for his grandfather, but the high-tech device is only causing the generation gap to widen.

Then an earthquake hits, forcing all four individuals to reevaluate their relationships. Does it leave them relieved and grateful for the opportunity to reconcile? Or does it give them the impetus to abandon things altogether?

About a year ago, this rough premise for a new play started taking shape over a cup of coffee. On one side of the table sat Molly Allen, morning radio co-host for KZZU 92.9. On the other side was Billy Hultquist, a local actor who Allen had recently met through his wife at a fundraiser. They found they had an instant rapport and almost immediately started brainstorming ways they might work together.

"We were thinking we wanted to do a comedy," Allen says. "We have a lot of inside jokes and things that we think are funny. We're like two 10-year-olds together. So I started writing this script. And I said, 'What do you think? I think it's a couple trying to break up.'"

The parts for this fictional couple were written expressly for Allen and Hultquist as actors.

"He's a little younger, she's a little older, and she's insecure because he's young and cute. She's a news broadcaster, and he's a reporter, so he ends up going out on the road a lot. And she jumps to conclusions about things that may or may not happen in their relationship," Allen says.

Allen started sending Hultquist "five pages at a time" until it "just sort of became this full show." But then she struck upon the idea of combining this bespoke script with a similar one — only this time, not about romance but family ties.

"I wanted to write something for my stepfather, Jack Bannon. So I thought, why don't I just write it as if they're in another apartment and they also get trapped by the earthquake?" Now cleverly merged into a single play by a common event, the show she'd initially written for herself and Hultquist became the second act in "a story about miscommunication and losing affinity for each other, then piecing it back together with humor and understanding."

The resulting play was titled On Shaky Ground. It's not Allen's first stab at writing a theatrical work — that would be The Day Spring Wouldn't Come Out, a multimedia piece she wrote back in 2003 by drawing on the skills she picked up as a preschool teacher. Nor would it be her first time treading the boards. While living in Florida in the mid-'90s, she often appeared in community theater shows, and more recently she performed locally alongside her mother, Ellen Travolta, in the Coeur d'Alene Summer Theatre production of Hello, Dolly!

All the same, Allen found herself in a typical beginner's predicament. She had a script, and even willing actors, but no venue.

"Once my parents read it and loved it, I wanted to find a theater right away, because I'm really impatient," she says. "Everybody else had filled up their season, but Ignite! hadn't. They were still deciding on a few things. So I talked to them about their first show of the season, and they were interested in putting it on."

With Ignite!'s stage, her mother's backing as co-producer, and Hultquist, Bannon, and Oskar Owens — a young local actor who "grew up watching Jack (Bannon) in the theater" — on board as performers, Allen went about assembling a "dream team" of directors and crew.

"Troy Nickerson is in charge of directing my act with Billy, and Dawn Taylor Reinhardt has taken on the one with Jack and Oskar," she says. "Ours obviously has Troy's stamp on it. Billy and I have been reading this show for months, and yet Troy comes in and suggests things that we never even thought of. That's why you need a good director. He just has this vision. And I know that Dawn's going to do a fantastic job."

Allen hopes that On Shaky Ground will find solid footing at Ignite! and then make the leap to regional or national playhouses. Despite being written with specific individuals in mind, she says it has a broad appeal in terms of its themes and humor.

"Anybody who's ever been in a relationship of any kind — parents, grandparents, a spouse, whatever — can relate to how those relationships deteriorate, how easily it can happen, and how it can be mended if you're willing to hear each other. And we talk about farts. Billy has a pretty good monologue about the highest ranking fart of all time. It's very relatable." ♦