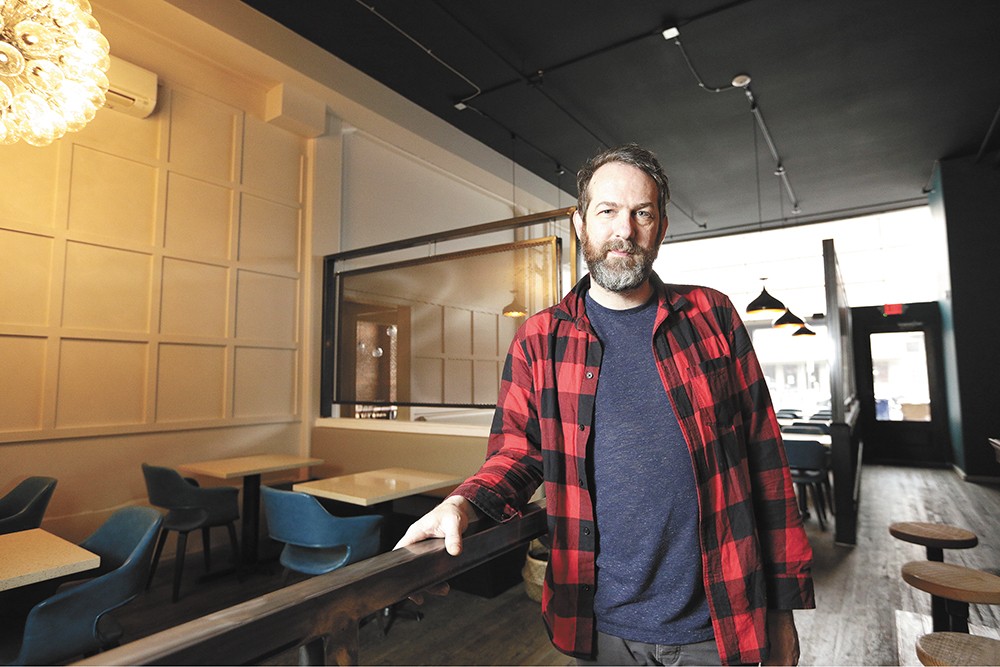 Just shy of two years since word went out, Eyvind has finally arrived.

The new downtown Spokane restaurant from chef Tony Brown was first announced in January 2018, and has been long anticipated ever since by supporters of his existing, menu-swapping eatery, Ruins.

The restaurant's name (pronounced "eye-vind") and concept was heavily inspired by the oeuvre of American artist Eyvind Earle, who famously painted ethereal background and concept art for some of Disney's early animated films like Sleeping Beauty. Dark and moody landscapes in saturated, contrasting colors are a recurring motif in Earle's work.

"I like the idea of having the name be inspired by an artist, because I think culinary arts, as an art, gets pushed to the back. A lot of people don't think of it as an art; it's just a way to cook and eat food," Brown, 42, says. "But I can be artistic in plating and flavor profiles in several different ways.

"Eyvind [Earle] was kind of a surrealist painter with lots of vibrant colors that didn't really go together, but in a painting they do," Brown continues, "and that's how I view food — taking different flavors and ingredients and putting them together and making a cohesive dish."

The "Silent Meadow" consisted of beef, broccolini, a pea puree and roasted garlic in homage to a verdant green landscape striped with tall, inky black shadows. A dessert of white chocolate, matcha, pistachio and absinthe was plated to represent the shapes and palette of Earle's "Snow Covered Bonsai."

Beyond occasional special menus like this, Eyvind offers a modern and seasonal take on what Brown describes as "approachable fine dining."

"I come from a fine dining background and know it can be a little scary to go into a restaurant where you don't understand what half the things are, and you don't know what to wear," he explains. "Our staff is trained to tell you what everything is. We want people to experience good food, and it's also cheap-ish. You can get out of here with $30 and that's with a drink, even."

For regular dinner service, diners can expect a one-page menu of shareable appetizers and affordable entrees in the $15 range, along with a few desserts. Lunch fare, which debuted this week, consists of a variety of salads and sandwiches. Menus will be more consistent than at Ruins, which alternates cuisines each month, while highlighting seasonal ingredients and with a broad focus on vegetable-based dishes.

Eyvind's dining room seats around 50 guests at tables and two bars, including one that looks into the large, open-concept kitchen featuring a vivid, lime green — a color frequently used by Earle — tile backsplash above the stove. Other subtle artist tributes in the space are a soft pink wall behind the bar, teal blue chairs in the dining room, and plans to fill the space with potted houseplants and greenery.

For Hunt, the connected basement space below Eyvind, Brown partnered with building owner Jed Conklin to create a warm and rustic space with low, exposed ceilings and custom-built seating using wood salvaged from the upper floors of the 1905-built Bickett Building. In the back of the unexpectedly cavernous space, two rooms can be reserved for larger groups and closed off by a tent-inspired canvas curtain.

As with upstairs, most of the entrees at Hunt, including the braised rabbit stroganoff, elk burger and turkey confit with wild onion gravy, are $15 each. Smaller portions and shareable starters range from $4-$10, and include warm chickpeas, wild salmon rillette, elk chili and grilled sausage.

Cocktails at both Eyvind and Hunt are mostly classics or slight variations of them. While Hunt's drinks revolve around whiskey and gin, Eyvind's menu highlights vermouth and amaro.

Hunt originally wasn't part of Brown's restaurant expansion plans; the two new spots double the number of eateries he now owns and operates in Spokane, including Ruins and Stella's Cafe. After Conklin pitched his own idea for a camp-themed bar, however, the chef was game.

"I'm a big outdoorsman and lifelong hunter, and the concept [for Hunt] has been floating around in my head for a while," Conklin says. "I've been a fan of Tony's for a long time, and there was no one I wanted to do it with other than Tony, so I said 'What do you think about opening up two at the same time?' and he said yes." 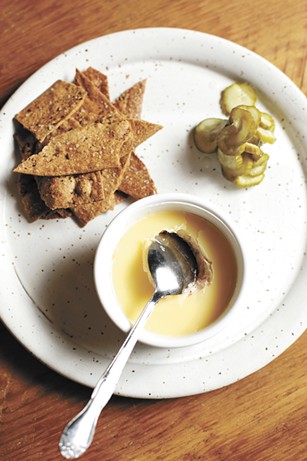 Redband, a third connected space on the main level, named after the Spokane River's native redband trout, is available for private events with its own bar and catering service from the main kitchen in Eyvind. Brown and Conklin are also equal owners of Redband.

Joining Brown in the kitchen, bar and front of house are plenty of familiar faces in the local hospitality industry. Serving as Eyvind's sous chef is Chong Vang, formerly of Inland Pacific Kitchen. The bar team includes Anthony Burgess, Cabby Barnard and Erin Fasbender, with help from Ruins' bar staff, sisters Crystal and Suzie Bertholic. Brown's brother Jon Brown is general manager now for all four of his restaurants.

For the foreseeable future, Brown plans to stay busy seeing Eyvind and Hunt settle into a consistent, quality-focused routine. In the five and a half years since opening Ruins, he reflects that it's a great time to be a chef in Spokane, contributing to the rapid growth and innovation in regional dining culture.

"I feel like I'm a part of something that is going to expand, and build upon what we've done. It's only a matter of time before it all explodes, whether a year from now or five years from now."

Brown also says, though, that he's not interested in opening another restaurant after this.

"That could change, of course — it's hard work — but I want to get these ones as best as they can be and ride off into the sunset," he jokes. ♦