Classy restaurants are serving them, and they're serious business

By Mike Bookey and Dan Nailen 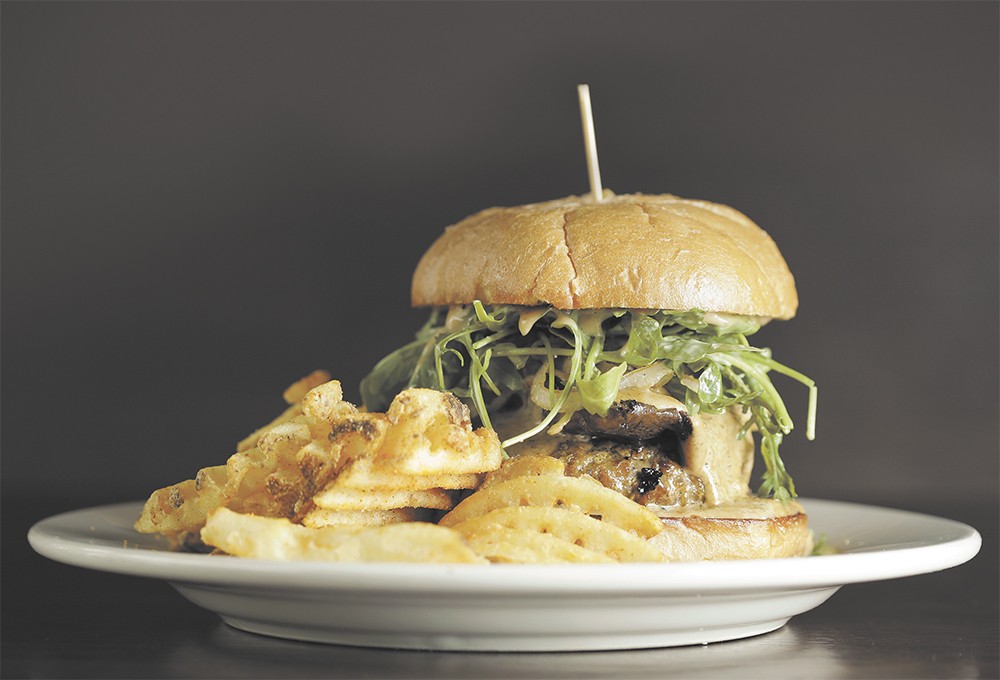 If you're the sort of person who doesn't end up seated at a white-linen-tablecloth restaurant too often,

you have to be careful with your order because it's probably a special occasion. If you're a fan of excellent hamburgers, this is problematic. When you tell people you went to a respected and upscale restaurant, you don't want to tell them you just had a burger.

Still, many fine-dining establishments — not just in our region, but across the country — feature a burger on their dinner menus. Maybe there's some one-upmanship going on. A burger battle between chefs, perhaps. Whatever the reason, this trend should be embraced.

With that in mind, we ate four very good burgers around town at places you might not think would even serve a burger.

So you've found yourself at Italia Trattoria, a place so popular that when you called for a reservation earlier that day, you got the last available table, and it's not even a weekend. You go down the menu and salivate at the wild boar and the potato gnocchi. The sausage-and-pistachio-stuffed quail sounds adventurous, and you wouldn't mind the self-satisfaction you'd get from ordering such a creation. You're going to do it.

Then the waiter comes by. Your wife goes first, per custom, and proceeds to ask enough questions about the pappardelle lamb ragu that you have time to read to the very bottom of the entrée section of the menu and notice the last item. It has the longest description of any dish. It's a burger. You order it when it's your turn. Your wife asks what the hell happened to the quail.

You are not disappointed when the Kobe beef burger arrives. You can smell the Gorgonzola aioli as it drips down the side of this glorious creation. You didn't expect to be let down because everything you've ever eaten out of Anna Vogel's kitchen has been similarly spectacular, but even then, you're stunned by this burger. The housemade bun is remarkable in and of itself. Oh, and you can add a fried egg and/or bacon for $2 each.

Secret weapon: In addition to fresh lettuce and tomato, the burger is also topped with peperonata — a mixture of sweet bell peppers, onions and garlic mixed in olive oil which adds some southern Italian flair to the dish. (MB)

"Build it tall," Gardner says of his philosophy. "Build it as tall as you can. Get some height on it."

The Dr. G's Gourmet Burger was inspired by its diminutive little burger buddy that Downriver Grill serves up every Wednesday, along with a beer, for just $10. That weekly treat proved so popular among Downriver regulars that in May, Gardner says, "we thought of putting together a high-end burger."

Mission accomplished. The Dr. G's beast is a half-pound Angus beef patty topped with marinated and grilled portabella mushrooms, fried onions, arugula dressed in a truffle vinaigrette, a port-peppercorn aioli and the addictive Cambozola fondue (a combination of a French cream cheese and Italian gorgonzola) — a cheesy sauce Gardner likes for dipping fries, too.

Holding it all together — a vital aspect of any worthy burger — is a kaiser bun that Gardner says "is really unique in that it's tough and really holds onto the stuff, but it's really palatable and airy, too."

Secret weapon: That Cambozola sauce, of course, but don't underestimate the truffle flavor on the spicy arugula. (DN)

When Alex Barham and Melissa Mariscal were originally planning the menu for Lodgepole before it opened just over a year ago, there was no burger to be found. But they got enough messages from friends — "You going to have a burger? You gotta have a burger!" — that they changed their minds, and Barham says, "We figured if we're going to do it, you might as well do it as well as you possibly can."

The result is their version of an American classic, albeit one with some funky twists. The restaurant's namesake burger is a half-pound of locally sourced beef topped with pickled onions (or, occasionally, other pickled goodies), avocado, lettuce, BBQ aioli, American cheese and porchetta — house-cured pork belly roasted with a range of herbs and spices.

"The progression actually started with the bun," Barham says. We knew we didn't want to go with the brioche bun that's been kind of the trend. We wanted to lean more towards the classic American burger backbone. So we started messing around with dough recipes and came up with a pretty classic sesame-seed bun that we bake here in-house."

That bun manages to hold the toppings remarkably well, and the American cheese probably helps, too.

"One thing I wasn't going to budge on, and I knew it might upset some people, was the American cheese," Barham says. "I grew up eating American cheese on my burgers, I think it's delicious, and I think it's the perfect melting cheese. So we decided to stick to our guns and just roll with it."

Secret weapon: That layer of porchetta gives the Lodgepole Burger something you don't taste every day. (DN)

When Aaron DeLis and his partners bought Luna, the refined restaurant on the upper South Hill, he already knew they had a good burger. But he soon realized it was actually the restaurant's most popular item. It also gets a lot of play as a takeout item.

"We have it on the brunch and lunch menus, not just on the dinner menu, so that kind of skews it, but there's no doubt that people love this burger," says DeLis.

Luna makes their brioche buns in-house, and you can taste that freshness immediately — at least until you begin to savor the Kobe beef and the thick-cut and just-greasy-enough Kansas City-style bacon. It's also topped with white cheddar and balsamic onions, as well as grain mustard aioli.

"It's our version of the burger, and it makes our restaurant a lot more approachable for some people. With that said, we're going to make a burger the best we can," he says.

DeLis says the Luna burger holds up against the other fine dining burgers, but is quick to praise other burgers, like the one at Wild Sage, which he finds particularly delectable.

Secret weapon: The bun is stellar, but that white cheddar is what makes this burger stand out. (MB)