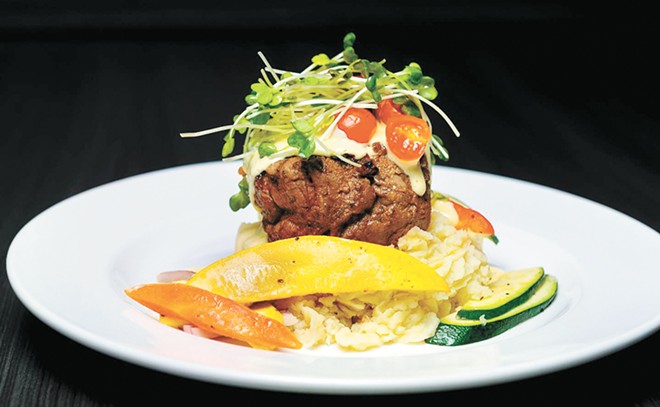 If there's anything people are likely to cling to in this uncertain year of unprecedented challenges, it's small traditions involving food. Going to your favorite fine dining restaurant and splurging for an anniversary or setting up a surprise meal for that special someone's birthday can bring a sense of normalcy to an otherwise abnormal year.

While North Idaho restaurants were shuttered along with other businesses for a few weeks this spring, fine dining establishments saw the return of their customers (and then some) this summer as the state loosened its pandemic restrictions. While some meats and produce were at times difficult to get on a reliable basis, chefs now say they're back on track delivering the unforgettable dishes customers have come to expect.

There are still guidelines in place to keep patrons farther away from one another, and masks should be worn on the way to and from your table, but the upscale atmosphere and exceptional service expected at a nice dinner can still be found throughout the region. Just don't forget to make a reservation, as they're now more important than ever.

At FLEUR DE SEL in Post Falls, owners Patricia and Laurent Zirotti have kept a close eye on sanitation and safety measures as they welcome back guests.

"We are a special occasion restaurant," Patricia Zirotti says. "That means also our clientele could be a little older, so we need to be safe for those who still feel comfortable enough to go out. It's our duty to make them comfortable and be as safe as possible."

Menus that might have been printed on heavy card stock before are now laminated, to make it easy to sanitize them. Leftovers have to be boxed up by the customer for now, instead of staff.

Being French, Zirotti says she dearly misses hugging and kissing her customers, and lingering at tables to enjoy some conversation, but she hopes that safety measures will help things return to normal sooner than later. With a few people, she's had to emphasize that mask requirements and the extra sanitation are all meant to keep the customers, their loved ones, and the owners and their staff safe.

"We're hands-on owners, and my husband and I are not 20 anymore," Zirotti says. "I've never seen my husband on the sideline in 12 years. No matter what, we just work; we have to work. That would be disastrous if one of us was sick."

So while things may feel a tad different, customers can still splurge on decadent, French dishes like duck confit, lamb cheeks, airline chicken breast with truffles and more.

To the north in Sandpoint, with expansive views overlooking Lake Pend Oreille, is FORTY-ONE SOUTH, which Cassandra Cayson has owned for 10 years.

No, the name isn't a confused latitude, but instead based on the restaurant's address on Lake Shore Drive at the south end of the Long Bridge.

Luckily, the restaurant weathered this summer well, as most dining during those months is already outside on a massive patio that can seat close to 150 people, Cayson explains. But for winter, there's still plenty of seating inside the spacious location, which features multiple fireplaces and a warm, inviting atmosphere.

"It's professional service, but it's also very welcoming," Cayson says. "It's upscale, but North Idaho upscale."

Cayson describes the seasonally changing menu as innovative modern American food, with about half the menu changing with the weather to focus on warmer, heartier dishes as winter sets in. A new saffron risotto with butternut squash is one of her favorites on the current menu.

Other popular items include a smoked filet mignon, which is cold smoked in house, and the Stone Harbor crab bisque, both of which remain on the menu year-round, she says.

In Coeur d'Alene, even with the loss of lunch service, BEVERLY'S has been booming this year, with many clients likely coming from across the border in Washington, sous chef Taylor Wolters says.

The pandemic has given the fine restaurant inside the resort a bit of an identity crisis, Wolters explains, as the focus that had been spread out over lunch, banquets, dinner and room service has largely dialed in toward room service and dinners. But that has also enabled some extra creative time, he says.

"We're always trying to keep things interesting and changing, and we definitely have the time now to put a little more care into guest requests," Wolters says. "The other night, somebody wanted to do like a five-course tasting menu for her husband's birthday, and that was something we were able to do without any issues."

The restaurant has maintained some crowd favorites that people tend to look forward to, including Hawaiian ahi tuna, scallops and different steaks.

"But trying to kind of break some of those boundaries a little bit and bring something new to the table is definitely something that I've been kind of focused on and working towards," Wolters says.

With a great season this year for mushrooms, the restaurant expects to be able to serve a mushroom risotto with honey-roasted root vegetables and Brussel sprouts throughout this fall and winter. Likewise, this year was great for wild salmon, Wolters says, and that popular item that typically would need to be phased out already is likely to remain on the menu throughout the year.

"We really want to go out of our way to make those special occasions happen as best they can," Wolters says.

In Moscow, LODGEPOLE owners Alex and Melissa Barham were able to use some pandemic downtime to do small upgrades to their floors and bring in more plant life as they spaced tables further apart, chef Alex Barham explains.

"Our building is kind of a really cool, historic building that's 90-plus years old," he says.

Similar to other restaurants, Lodgepole stopped brunch and earlier-in-the-day meal service to focus on dinner during this time. Most of the dishes utilize local, Pacific Northwest ingredients and style, but there's also a blend of Mexican spices and flavors with the influence of Melissa's family background, he says.

Indeed, Barham says he's a fan of everything on the menu, but the dish he returns to most is a pan-roasted chicken made with an achiote glaze that was originally inspired by a dish Melissa's mother makes.

"Our pan-roasted chicken has been on the menu from the beginning and will never go anywhere," Barham says. "It's not super spicy; it's nice and sweet. It works so well, and it creates that idea we're trying to do of merging those flavors with these ingredients."

The restaurant also occasionally offers special dining opportunities including chef collaborations with wineries, breweries and specialty food item providers throughout the region. These limited-seating events are posted in advance on Lodgepole's social media pages where diners can also find out how to buy tickets.

"That's a great thing that not really any of the other restaurants around us do," Barham says. "It's great to see people so passionate about the same industry." ♦

The original print version of this article was headlined "Celebrating Together"