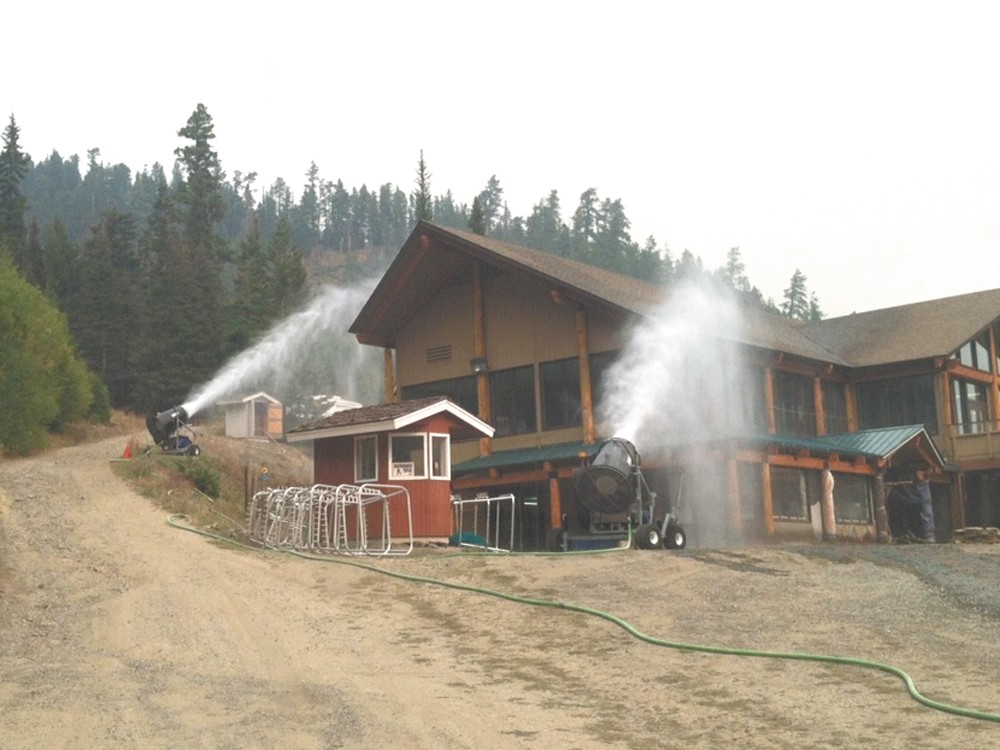 Josh Jorgensen
Mission Ridge staff trained their snowmaking guns on the lodge to keep it from burning.

Normally, summertime at a ski resort is a relatively calm time. Employees might clear out trails, repair the lifts, refurbish the lodge or catch up on maintenance. But it wasn’t that way for Josh Jorgensen, general manager at the Mission Ridge Ski & Board Resort.

Lightning strikes on Sept. 9 started a 56,000-acre fire near Wenatchee, and Mission Ridge was smack-dab in the middle of the maelstrom.

Jorgensen and his staff would chart the fires’ progress. “They merged right on our back door, on the west side of our slopes,” Jorgensen says. “Those fires just moved towards us.”

A hundred firefighters swarmed through the camp. The fire crept up within a half-mile of the ski area, only kept at bay by the rocky ground that surrounded the resort.

The ski resort became a hub for the ongoing battle: Firefighting helicopters dipped their buckets in the reservoir of the Mission Ridge resort. Firefighters hooked up hoses to the nearby hydrants. They scraped defensive lines in the soil with bulldozers. They built their own five-mile long, quarter-mile-wide fire to burn away a potential fuel source for the blaze.

The snowmaking guns turned to firefighting. Jorgensen and his team would man the guns, with a 75-foot radius, and use them to wet down the lodge, the lifts and patches of trees.

“Not a whole lot of ski areas around Washington have that capability,” Jorgensen says.

For days, as the column of flames rose up high and thick, debris — “pieces of bark and embers and pine needles,” he says — would fall from the sky. On Sept. 19, the resorts night sensors flicked on the night-skiing lights at 3 pm because so much smoke choked the sky.

“It was super eerie,” Jorgensen says. An hour later, Mission Ridge employees were told to evacuate.

In the end, the carnage left by of flames may impact snowmobiling trails, but left Mission Ridge unscathed.

“We were just trying to be prepared for the worst-case scenario, but there hasn’t been any negative impact,” Jorgensen says. “Just because we were lucky. I don’t think there was any other reason.” The weather had been calm, the wind had been still.

But for the firefighters in central Washington, more than a month after the fires began, the battle still isn’t over.

“I was at the top of the mountain today [Oct. 12], and there’s still fire visible and lots of smoke,” Jorgensen says.

Tales of a Snow Rancher

Hop, Skip and a Flight

Gear That's New To You