Fire From the Depths

It took Soblivios two years to finish an album; now they're ready to ravage the world with it 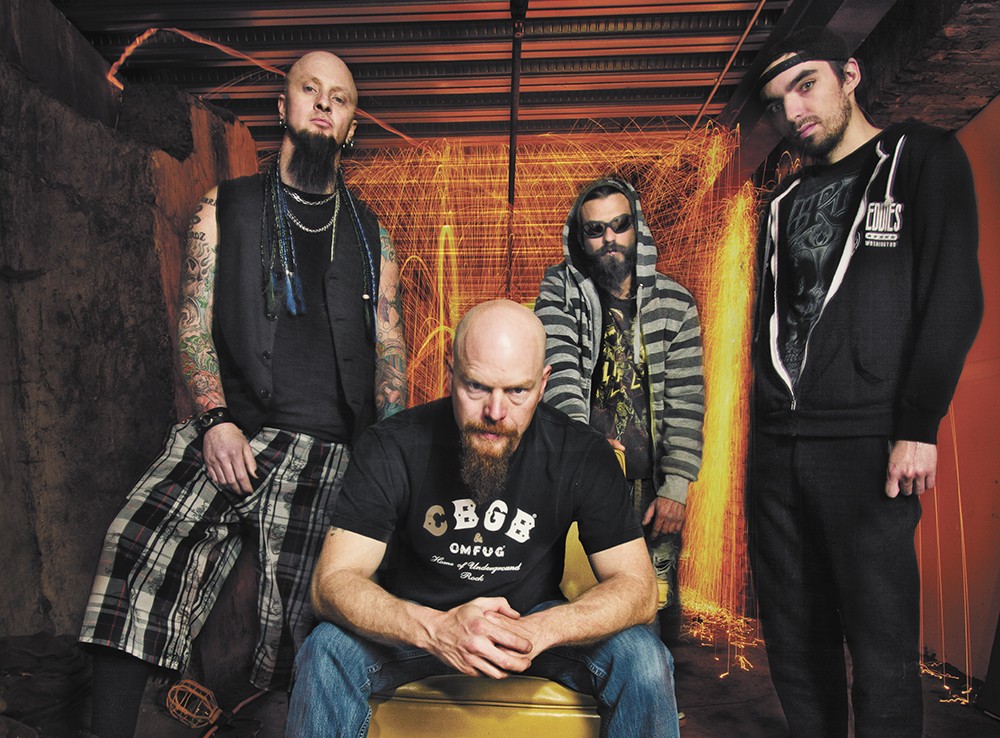 The band thinks of him as their very own Animal.

Like the famed Muppet, Soblivios drummer Joel Prophet is quick to go off on mumbled, rambling tangents. He often bounces and wiggles around a room, rocking energy barely contained.

"We swear he's not always like this," says Jason Shumaker, lead singer and bass player for the metal band. "It's usually much worse."

But put this spark plug back on the skins, and the act's heavy music rises to an energetic level that melds well with the boisterous yet melodic sound they've worked two years to achieve. Add Aaron Goff's finger-frenzied guitar solos, Ronnie Swindle's chunky rhythmic guitar licks and Shumaker's devastating roar on vocals, and they've created music that makes a worthy soundtrack to the apocalypse.

The band started in 2002 when Shumaker, the only original member, still lived in Seattle. He'd spent much of the '90s in Hollywood goofing off in the scene there — "I don't remember all of my 20s," he admits. "But I did have this Bon Jovi-like hair that got me laid a lot" — and moved up to the Pacific Northwest to take his musical calling seriously. Shumaker helped form Soblivios, and gave it a definition: "So oblivious to your surroundings that you actually contribute to your own demise."

After much turnover, the current lineup has been going strong in Spokane for two years. This weekend marks the first full-length release in the group's history.

"This is the best lineup Soblivios has ever had," Shumaker says. "It's the most natural flow of things and we're writing the best songs."

Together in this parking garage-like basement, they craft their soaring tunes and stop-and-go rhythms. Shumaker pens most of the lyrics. While you can't always understand the gravelly vocals from the performance stage (on the new album, Beyond the System, the lyrics are crystal clear), you can feel the rage, frustration and alienation bubbling up through songs like "Tortured Life" and "Rage and Ruin." The band members say they play this type of metal as a way to get aggression out, to purge some of the darkness welled up inside.

"It's a much better way of doing that than beating people up, which is against the law," Shumaker says.

"Although there are too many laws," Prophet adds.

But it's not all loud, roaring commotion. Highlighting a softer side (most of the band members are family men, after all), the new album includes a lyrical acoustic guitar song written by Swindle, recorded at Rainbow Trout Studios by producer/owner Bill Nieman. The guys say they're influenced by everything from reggae to slap-bass California funk, and this comes out in their chest-rattling music through the use of memorable melodies and vocal harmonies.

"This is the first record I've made with a group that I've wanted to listen to over and over again," says Goff, a self-taught guitar aficionado.

After working on the album for so long, it's a collective sigh of relief for the band to kick this thing out into the world. But that means it's time to start pushing, they say. There are goals for the future: big ones like having one of their songs blasted at a Seattle Seahawks game, and more manageable ones like booking a West Coast tour this summer. But making time for one another is always a priority. Like last year, they plan to take a trip to Lake Coeur d'Alene to hang out at Shumaker's family cabin and houseboat. They'll barbecue during the day and dance and play music around a campfire at night, howling at the moon. Prophet has dreams of the band rocking on top of the houseboat.

"We'd have to reinforce the roof for that," Shumaker says, but it's not out of the question.

After a decade of looking for just the right people for his band, this is the lasting lineup Shumaker has longed for — Animal and all.

"The individuality of this band, you clearly couldn't fill any of these spots with anyone else," Shumaker says with a smile. ♦