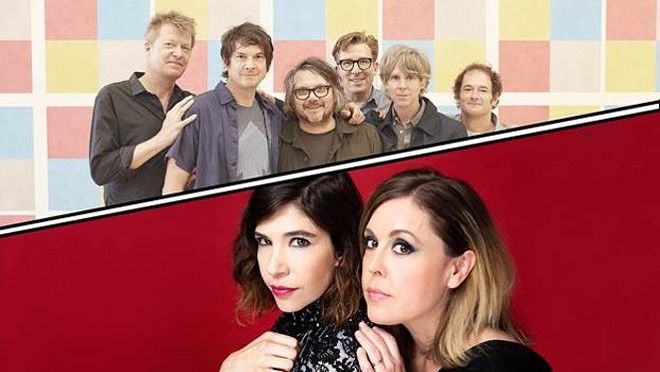 Wilco and Sleater-Kinney are coming back (again) to Spokane on Aug. 5.

Last summer, Wilco and Sleater-Kinney announced they were teaming up for a co-headlining tour that would start in the Inland Northwest. That was mere days before lockdown restrictions took the ax to just about every live music event in the country, and that tour was hastily rescheduled and then eventually canceled.

But it's back on again, and it'll kick off in Spokane on Aug. 5 at the First Interstate Center for the Arts. As with the announcement of their first tour, the bands teamed up for a humorous video clip to promote the new dates, and Sleater-Kinney just teased a new album called Path of Wellness that will be dropping June 11. Tickets start at $37 and are available now.

In other concert announcement news, the remaining members of '60s pop sensations and TV stars The Monkees are embarking on a farewell tour that brings them to the First Interstate Center on Sept. 10. Mickey Dolenz and Michael Nesmith will run through a series of hits and deep cuts from their five-decade career, as well as tributes to former Monkees Davy Jones, who died in 2012, and Peter Tork, who died in 2019. Tickets go on sale this Friday, May 14.

And finally, the Festival at Sandpoint continues to reveal its 2021 lineup in piecemeal fashion. The latest additions: Country star Jake Owen will perform at War Memorial Field on July 30 ($74.95), followed by the hybrid blues-rock sounds of Shakey Graves on July 31 ($49.95-$74.95). Get more festival information — and check in for more updates — here.