First on the Scene 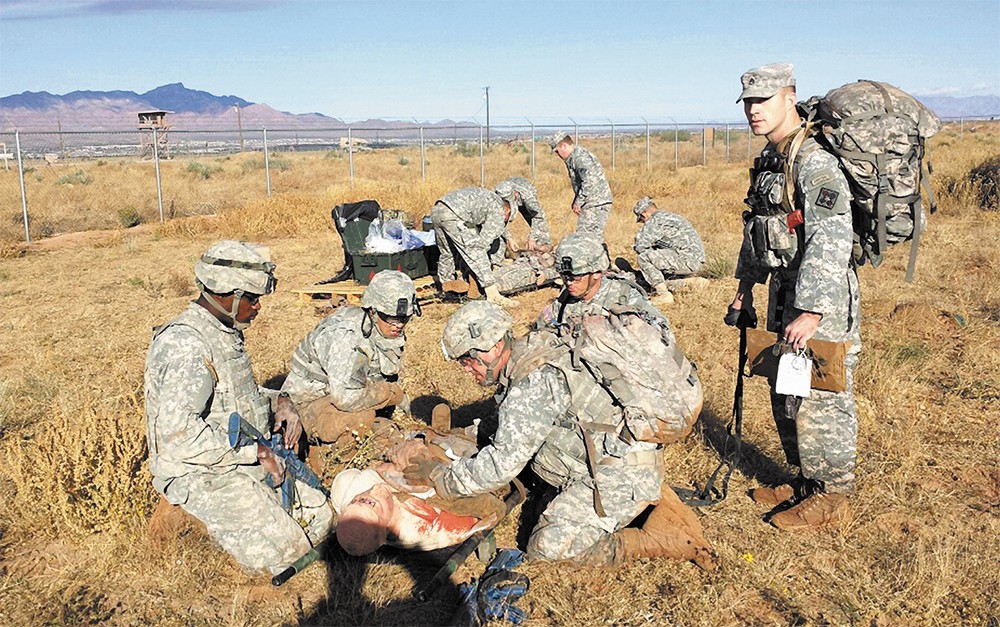 Adam Sahlberg (above right) evaluates a team of medics as they evacuate and treat a mannequin with life-threatening injuries during a simulated "care under fire" scenario last November in the high desert outside Fort Bliss, near El Paso, Texas.

I am in a unique position of witnessing the worst war has to offer on both the active battlefield and in the reactive hospital (better known as an aid station). ... I get to experience firsthand the bullets flying overhead and the bombs detonating outside my vehicle and then also witness the aftermath of those devices as the wounded get evacuated into the trauma room.

At war in the Middle East, the thing a soldier can never train enough for is the drudgery of downtime. The constant wait — sand everywhere, flies gnawing at your flesh, oppressive heat that causes sweat to drip no matter what time of day — just aggravates the mind-numbing boredom. But when a soldier is called into action or an emergency strikes, preparation is paramount.

"The most important thing to train for is what you're called to do when it really matters," says Staff Sgt. Adam Sahlberg, a medic with the U.S. Army.

After serving a 14-month tour in Iraq from 2007-08 as a line medic and an evacuation CEO (the EMTs and paramedics of the Army world), Sahlberg, 30, now travels to other bases training new medics who are soon to be deployed.

"I'm telling them the things I wish I knew before I went," says Sahlberg, who grew up in Spokane Valley.

From a young age, Sahlberg and his father participated in shooting competitions (shotguns, pistols, rifles) around the country, earning the title of grand master at 17. Wanting to serve his country, he enlisted the year after graduating from University High School in 2002. Even though his mom is a nurse, Sahlberg wasn't initially interested in a health care role. Instead, he joined military intelligence. But after taking medic classes and loving them, he knew that was what he was called to do.

Coming home from his overseas mission, Sahlberg was stationed at Fort Irwin in California, where he became involved in the extremely demanding Army's Best Warrior Competition. In 2010, he was named the Medical Command Noncommissioned Officer of the Year after acing a series of rigorous written, oral and physical tests, including one in marksmanship. Along with getting to meet the President and First Lady, Sahlberg says winning various awards meant the opportunity to choose his current assignment teaching trauma medicine. It also meant moving the family to Texas.

With four young children and a wife at home in San Antonio, it has been understandably hard for Sahlberg to be away, missing birthdays, lost teeth and family meals. That's one of the reasons journaling was so important for him while in Iraq.

"You get removed from your support base, and you're never the same," Sahlberg says. "But I have it easy compared to what my wife has to endure. She's raising the family."

A big part of what a medic does in the field, outside of handling mostly rare high-trauma situations and serving in the infantry, is to make sure other soldiers are taking care of themselves. Sahlberg says it can be mundane — checking to make sure underwear and socks are changed regularly and directing attention to personal hygiene. But he says these things help troops maintain a healthy attitude, and also make them less susceptible to infections while in the field. In a way, he compares it to being an active-duty mother.

"I'm talking about the deglorified things, but that's the more important stuff," says Sahlberg, on break from training in North Carolina.

There are times when a medic's technical training is essential. Traumatic injuries to the body and brain, as well as longer-lasting problems like traumatic stress disorder, are major areas of study for the Army. Teaching others how to quickly contain an emergency is key, since a medic can't be everywhere at once on a battlefield.

"A medic is only as effective as his men — the person who's placing the first tourniquet, the person closest to him," says Sahlberg.

Advanced on-the-field triage developed by the Army has spread to the civilian world. Sahlberg points to the Boston Marathon bombing last year, where emergency responders applied tourniquets on-site, saving limbs in the process.

"Tourniquets are often used only as a last resort," Sahlberg says. "But to see them used so aggressively in Boston, that's Army lessons learned."

The Army also has developed a kind of combat gauze that accelerates the natural clotting process for wounds where a tourniquet can't be applied.

In August, Sahlberg is planning on changing tracks, transitioning into the Army's physician assistant program — he earned his bachelor's in health sciences in 2012. Along with all he's taught the next generation of medics, his medic training will always remain with him.

"To be a great medic you need discipline," Sahlberg says. "Medics have to be innovative. You're told this is your set of equipment, but that doesn't always line up. Sometimes you have to make a tourniquet or a creative air supply. Above all, medics need to be resilient. They're exposed to the worst sides of war." ♦