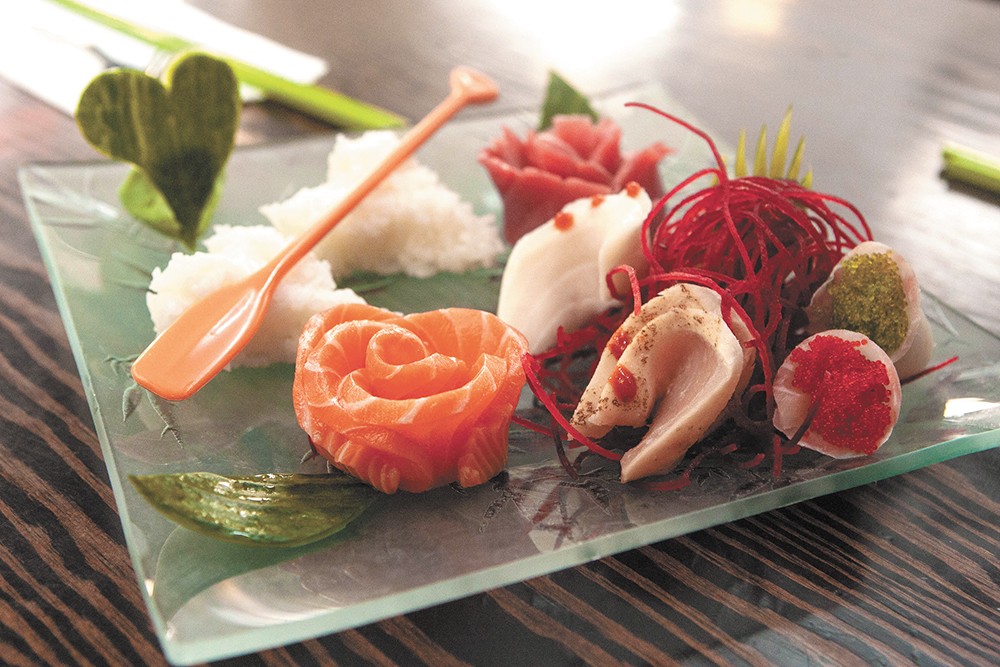 might be hiding one of the city's best spots for sushi. Quietly opening last November, QQ Sushi & Kitchen hasn't sought much attention. Despite this, it's attracted quite the neighborhood following.

Located in a spot that as of late has rotated eateries in and out about once per year — the previous place to fill its walls was the Evergreen Bistro, which closed in the first half of 2014 — QQ Sushi sits in a strip-mall storefront next to a Subway sandwich shop facing Francis Avenue. Stepping inside, one first notices how tiny its dining room is, with a seating capacity of around 30. But the rich, dark-wood furniture and a long, communal table with bench seating anchoring the room extends an inviting vibe to first-time diners.

Owned by Bao Zhang and Tong Liu — each have 10 years of sushi chef and restaurant experience behind them — QQ's menu offers a mix of fresh, baked and specialty sushi rolls, nigiri and sashimi sushi, and Asian fusion dishes, including Japanese bento boxes ($9-$11/lunch; $12-$18/dinner) and chow mein ($8-$12). Most items on the menu can also be placed as to-go orders.

The presentation of each dish is a direct, artistic expression of Chef Zhang — sauces and garnishes are placed carefully around the plate to make an arrangement of rolls into a smiley face, a flower or a fish. Pieces of salmon and tuna sashimi are rolled into the shape of a rose blossom. One of the most visually stunning dishes, and a popular menu choice, is the Fire Lion King roll ($12), a spicy baked roll of eel, crab and avocado topped with salmon, which is served aflame, wrapped in foil.

"That is kind of [Zhang's] signature. He makes everything really beautiful and presentation means a lot to him," says QQ server Angelique Tauala, who's worked with co-owner Liu for six years.

Also notable is the overwhelmingly positive reviews on QQ's Facebook page — a total of 80 diners have felt strongly enough about their experience to leave nothing but 5-star reviews and comments raving about the quality of its sushi.

"The owners are super hospitable and down to earth, and they like pleasing people with food," notes server and manager Gino Guajardo. "We get a lot of regulars in the area, and a lot who come in two to three times a week."

The restaurant's quirky name refers directly to its small size, Tauala explains. "When Bao found the place he felt it was really cozy, and in Chinese [slang], QQ means cute and small and happy." ♦