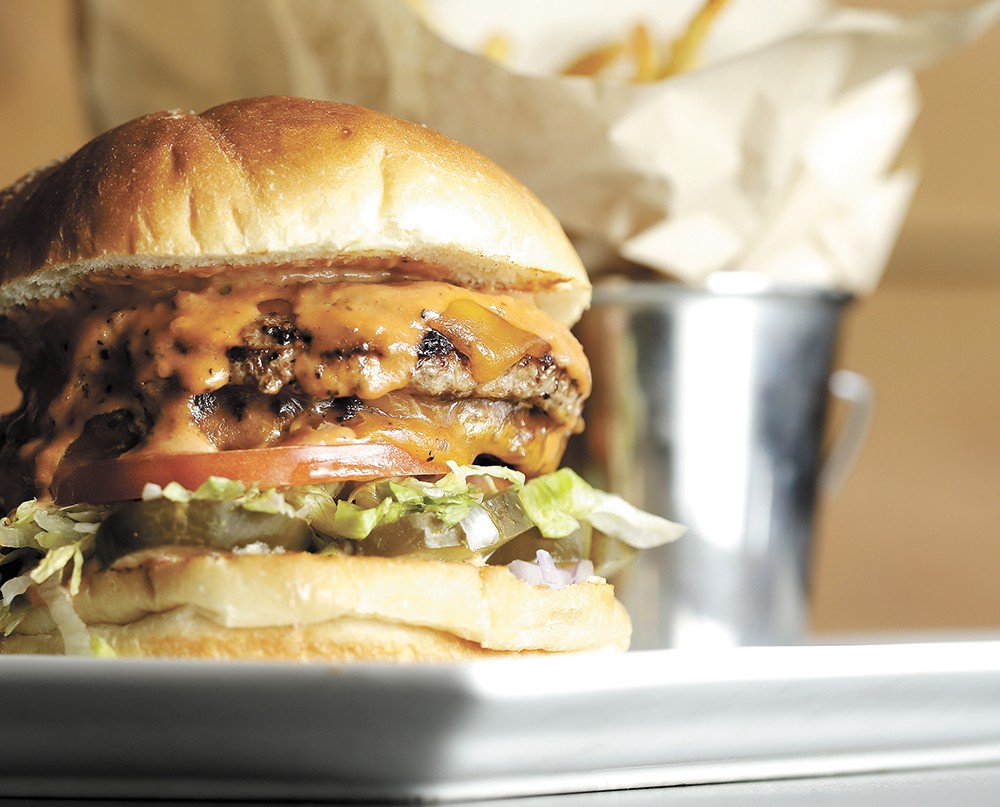 Young Kwak
Timber Gastro Pub's Run of the Mill Burger is anything but.

For a burger so hearty and rich you may not want to eat it all in one meal (which obviously isn't a bad thing), try the Blackbird's decadent Mi Mi burger. Unlike beef patties topped with all the traditional toppings (onions, lettuce, tomato, pickles, mayo, ketchup, etc.), the Mi Mi isn't messing around with its flavor-melding.

Starting with beef from Washington state-based Gebbers Farm, the chuck-and-brisket patty is topped with white cheddar and pea shoots. Yet the stroke of genius of the Mi Mi burger is its heavy load of gooey, salty, sweet candied bacon crumbles. The savory-meets-sugary topping offers the perfect balance to the earthy, grilled beef with tangy cheese and the sweet, crunchy pea shoots. Not for the faint of stomach or heart, the Mi Mi is worth all the sticky fingers and risk of tummy ache (it's that rich) for its indulgent take on burgerdom. And as deliciously tempting as anything else on Blackbird's menu may be, I nearly always order this burger, and its epicurean memory never fails me. (CHEY SCOTT)

The Elk's Smash Burger doesn't try to do too much. But, somehow, it does so much. The brilliance is in the two burger patties — two juicy, hand-smashed, melt-in-your-mouth, three-ounce patties. It's a huge step up from the Elk's previous signature burger, the Moon Burger, which had just one six-ounce patty. Two years ago, the Elk moved away from the Moon Burger in favor of the the Smash Burger (also featured at Geno's, a restaurant under the same ownership).

This so-called Run of the Mill burger is anything but, yet we like double-puns (note the logging industry reference). Anybody can amp up a burger with a few pieces of bacon; Timber Gastropub grinds pork belly into their all-beef chuck. Pork belly, as we know, comes from the same region as bacon, only it's fattier (and fat equals flavor).

You taste the meat in this burger, twice actually; as all burgers feature two patties (which could equate to two meals for some). After the meat, you'll taste the cheddar's sharpness and, for more contrasts, there's red onion, lettuce, tomato and house-made pickles. Served alongside crispy, salty fries and scratch-made ketchup, this classic American meal goes beyond the common. For a few bucks more, have your mind blown by any of Timber's piled-on burger variations, knowing that those burgers are better for having been Run of the Mill first. (CARRIE SCOZZARO)

One summer out of college, way back in the heady days of 2005, I worked at a magical place, a casual dining spot called Red Robin, with a fresh-faced young server named Josh Kerns. Our lives have diverged since. Today he's a Republican Spokane County Commissioner, while I'm a reporter, the sort of profession his party delights in savaging.

But we both, independently and without knowledge of the other, returned to Red Robin this past month and we — of the hundreds of delicious options on the Red Robin menu — both ordered the same item off of the menu: The Banzai Burger.

So, why, after all this time, does the Banzai Burger still have such a hold on our hearts? Maybe it's the triumphant trifecta of tastes: savory beef meets sweet pineapple meets tangy teriyaki. Or maybe it's the journey through textures your bite takes as it chomps through the bun: the cool, crisp tomato, the cheese, the shredded lettuce, the warm grilled pineapple rings and, finally, the succulent burger. Or maybe it's the satisfying aftertaste that hangs on the tip of your tongue as you pause to savor — an aftertaste that demands another bite. Whatever the reason, perhaps a burger like that provides the cure to finally heal the wounds that divide this country. That, and unlimited steak fries. (DANIEL WALTERS)

Whenever I find myself in one of the cushy booths at Durkin's, I tell myself, "I'm finally going to get something other than the burger." More often than not, however, common sense prevails and I just end up ordering the burger again. It's just too good to pass up.

On paper, the Durkin's burger doesn't seem like it's going to be much. After all, it's only got red onions, pickle and dill mayo on it. This burger turns out to be surprising in a couple of ways, because not only is its name a misnomer (it actually comes with two generous patties) but it's delicious and decadent despite foregoing a lot of traditional burger accoutrements. The combination of the juicy, flavorful beef and the sharp tang of the cheese is a thing of beauty, and I'm still not quite sure how they pull it off.

If you're feeling unreasonably hungry, cough up an extra $3 and you can upgrade that "single" to a "double," which is actually three patties. However you eat it, you're probably going to have a new favorite burger. (NATHAN WEINBENDER) ♦

Hamburgers are so loved in the U.S. they're largely considered as American as apple pie. But like apple pie, which was definitely made long before the country's founding, the delicious combination of ground meat between bread has a much more storied history.

If you want to go way back, it's believed that while Genghis Khan built his Mongolian Empire in the 13th century, frequently traveling on horseback, the conqueror and his armies packed ground or minced meat between their saddles and mounts, which tenderized and heated up the meat as they rode.

It also turns out that people really liked eating raw ground meat, for like, a disturbingly long time (and still do; see: steak tartare), before somebody finally decided to cook the stuff and smoosh it between bread, most likely at some point in the late 1800s.

Germans who lived in Hamburg were particularly fond of ground beef for a few hundred years before their descendants began immigrating to the U.S. in the mid-1800s. Around that time, restaurants picking up on German food styles started serving "hamburg steak," first raw, then later cooked, according to History.com.

A lot of people and places claim to have been the first to put meat patties on sandwiches, but it seems clear the American public was pretty much introduced to the hamburger at the 1904 World's Fair in St. Louis.

By 1921, the first White Castle opened in Wichita, Kansas, and the burger was even adopted into pop culture with characters like the mooching J. Wellington Wimpy, who famously tells Popeye the Sailor in a 1934 cartoon that, "I'd gladly pay you Tuesday for a hamburger today." Same, Wimpy. Same.

Whether you're driving through or sitting down, here are five Inland Northwest burgers that won't break the bank

Latest in The Burger Issue

We couldn't review every cheap burger, but these four classics are worth your appetite