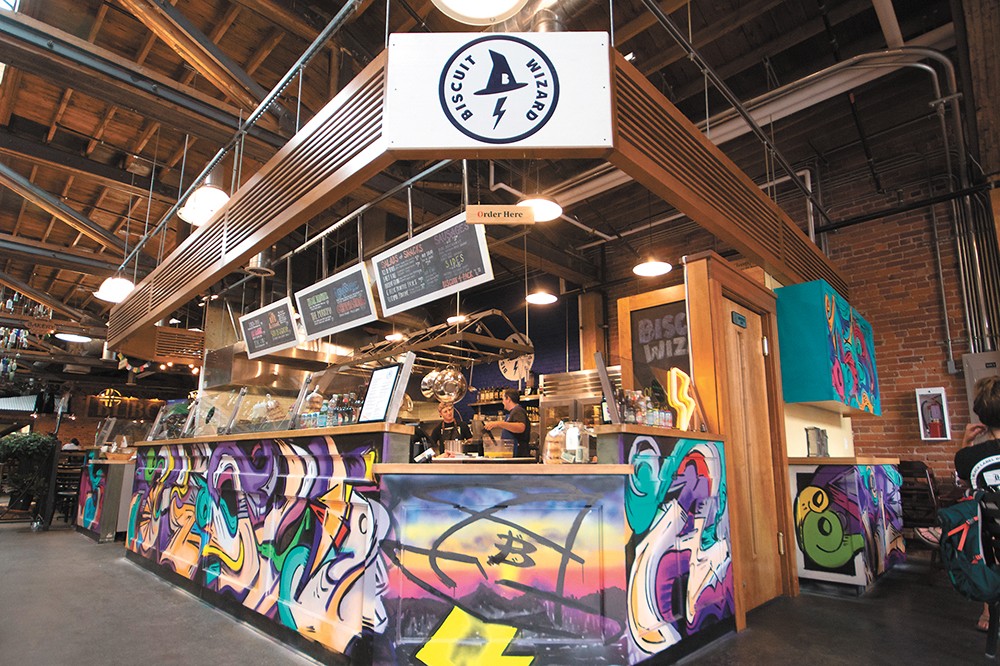 or you're more open to flavorful adventure, a new biscuits-and-gravy spot in downtown Spokane hopes to sate the hunger of all biscuit lovers.

"We wanted it to be a combination of both what is done at the bakery and at Santé — being able to showcase and utilize the meats and sausages made there, and the condiments," Kate Hansen explains. "We also wanted something that would be really well done and done from scratch, but in this fast concept."

The menu starts out with basic biscuit and topping combos, like the "lil' biscuit" ($3.21), topped with butter and jam, and "the S.O.S." ($4.27), a flaky, buttery biscuit topped with the ultimate classic: country-style sausage gravy. All biscuits, which can be purchased in a four-pack to take home ($6.73), are made just down the hall at Common Crumb.

The more creative listings include a version inspired by grilled cheese and tomato soup, as well as pork and beans on a biscuit, and then the "kryngshame," which comes with fried chicken apple sausage, apple brandy, whipped cinnamon mascarpone and parsley. Things get even more indulgent at the bottom of Biscuit Wizard's list, which culminates with "the big Lebiscuit," ($11.12) a concoction topped with bacon, bacon confit, White Russian gravy, sausage, egg and Kahlua sauce.

"It was really fun — we've never had more fun putting these together," Hansen says of the menu and its funky names, many of which are odes to pop culture and the couple's friends. "We spent lots of late nights laughing at different names and ideas."

The walk-up style eatery's moniker, too, was a family affair, conjured up by the Hansens' 14-year-old daughter. In keeping with Biscuit Wizard's playful theme, the couple recruited a local graffiti artist to decorate the outside front of the counter with colorful, abstract artwork. Don't be fooled that the odd-cent menu prices will even out after tax — that's also another nod to the fun and whimsical atmosphere the Hansens were going for.

In addition to biscuits and their varied toppings, the eatery offers a variety of salads, as well as garlic truffle fries and poutine. Add an egg to anything for an extra buck, some housemade condiments and sides for $.73, extra gravy (which we recommend) for $2.07, or a sausage made at Santé ($3.07). Special egg-based breakfast items are also served daily from 7 to 11 am. Hansen says they also plan to eventually move some of the prepared sandwiches offered over at Common Crumb to Biscuit Wizard's lineup.

Located inside the hip, open marketplace space on a bustling stretch of Main Avenue, Biscuit Wizard offers long hours to sate the hunger of the breakfast crowd all the way to the late-night bar hoppers. The biscuit counter is casually open as late as the adjacent Black Label Brewing Co. inside the Commons. ♦