Flames, smoke and heat are all threats in California fires 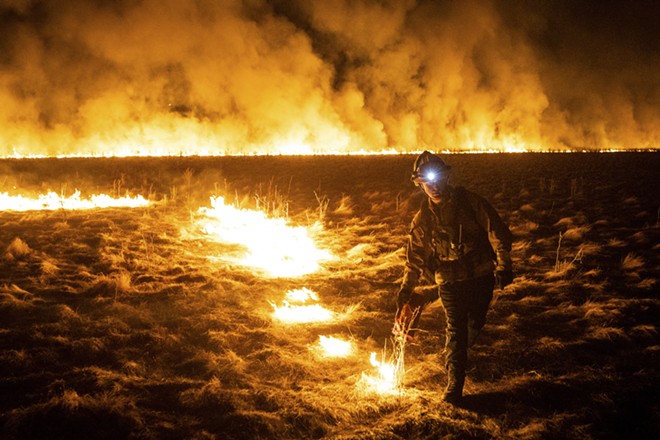 Max Whittaker/The New York Times
Luke Iott, a Vacaville firefighter, burns a field ahead of a wildfire in Fairfield, Calif., Aug. 19, 2020. Thousands of people were forced to flee their homes in Vacaville, a city of about 100,000 residents near Sacramento, as a combination of uncontrolled fires continued to threaten Northern California on Wednesday.
The New York Times Company

Wildfires continued to rip across Northern California on Thursday, as the state struggled to contain the blazes and to help thousands of people who are fleeing their homes amid a grueling heat wave, the coronavirus pandemic and unsafe air thick with smoke.

A large group of fires burning in wine country west of Sacramento had grown to cover 131,000 acres by Thursday, according to Cal Fire, the state’s fire authority. The agency said nearly 350,000 acres have burned in Northern and Central California, with many fires sparked by lightning strikes in the high heat and then fanned by winds.

Those conditions helped new fires sprout across the state Wednesday and Thursday, and caused other fires to merge, complicating efforts to contain the combined blazes. Almost two dozen major fires were reported Wednesday, and more than 300 smaller ones. Evacuation orders have affected thousands of people in Northern California. The group of wildfires threatening Vacaville, called the LNU Lightning Complex, has already destroyed more than 105 homes and other buildings. Cal Fire said 30,500 more buildings are under threat.

At least two people have died in the firefighting effort. One was a helicopter pilot on a water-dropping mission who was killed in a crash in Fresno County on Wednesday. Another was a worker for Pacific Gas & Electric who had been clearing the area of electrical lines for firefighters and was found unresponsive in his vehicle in Solano County on Wednesday.

California was under intense strain from the heat wave even before the explosion of new fires, with rolling blackouts shutting off power to many residents. The temperature Thursday was expected to again surpass 90 degrees in Sacramento, Napa and Sonoma counties.

East of Silicon Valley, the SCU Lightning Complex group of fires prompted evacuation orders on the edge of San Jose. That combination of about 20 fires grew to 137,475 acres overnight but has largely been kept away from more populated areas.

Brice Bennett, a spokesman for Cal Fire, said firefighters had started to see cooler temperatures and calmer winds at night, allowing them to begin to try to contain the blazes.

“We don’t have the winds that we did three days ago, and that’s a huge impact,” he said.