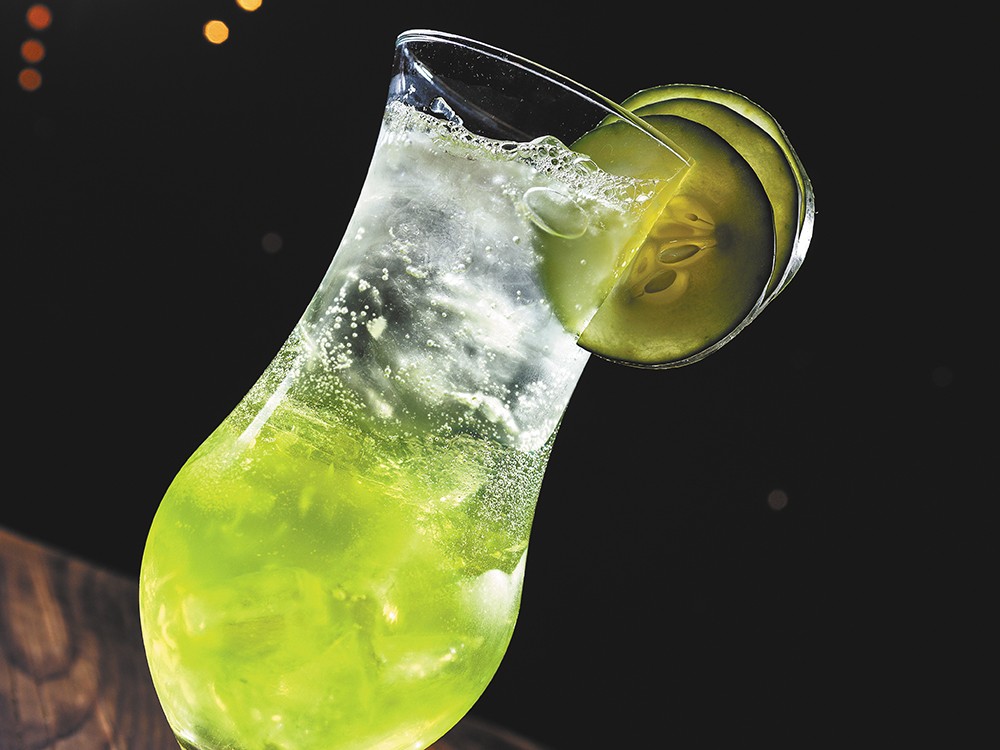 Stephen Schlange
The Afternoon Breeze, one of the District Bar\'s signature cocktails.

Smack-dab in the center of Spokane’s entertainment district is a new bar that aims to be the destination of downtown theater- and concertgoers.

Matt Judge, general manager of the Knitting Factory, served as project manager for the opening of the District Bar in mid-February. He helped revamp the space next door to the Knit that was once known as Mixx 916. Some do-it-yourself touches, such as old desk chairs reupholstered with used leather jackets, give it a relaxed feel to draw in the arts-and-culture nightlifers.

A few perks were put in place, too. Anybody attending an event at the nearby Bing Crosby or Fox Theater — each less than a two-minute walk away — can show their ticket for 10 percent off their tab. Those going to a concert at the Knit get early entrance if they first visit the District Bar.

At this bar, it is all about the food, Judge says. Executive chef Gary Evans, who has a background cooking at resorts, casinos and hotels, ended up at the District Bar after working at the Davenport Hotel’s Palm Court Grill.

The braised pork cheeks served with bourbon butter sauce ($7) on the happy hour menu are the first item Evans recommends. We tried the fish tacos ($5), also suggested. The three tacos were brimming with pan-seared cod, cabbage and tomatoes and cooled off with cilantro lime sour cream.

The regular menu unfolds with meat-filled entrées such as a bacon-wrapped burger ($11.50) and appetizers like faux cheese sticks ($9) made with beer-marinated hearts of palm and oven-roasted tomato.

The District Bar is home to 42 different beer selections. That might be daunting at first, but you can bite into the tap list by ordering a beer flight ($6) with your choice of five three-ounce draft beers.

The menu of craft cocktails— all made with fresh squeezed juice — will change with the seasons. We tried the Afternoon Breeze ($9). The muddled cucumber mixed with vodka, soda water, and Midori melon liqueur makes it a refreshing bubbly choice for the onset of spring.