Why did the Coeur d'Alene Press give nearly 3,000 words to a three-part op-ed series about 'chemtrail' conspiracies? 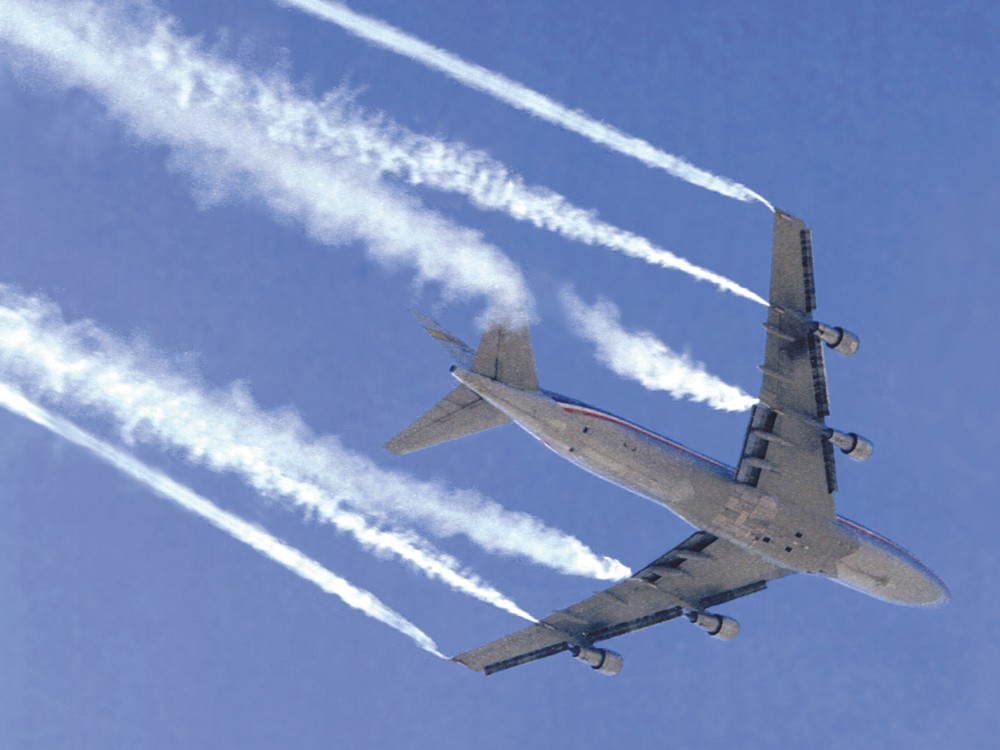 NASA
Contrails, or \"chemtrails\"? Scientists have been unable to kill the consipiracy.

As a kid, you may have marveled at the white trails airplanes leave across the blue sky. They’re “contrails,” your dad may have explained — the result of hot engine exhaust mixing with the cold air of the sky.

But if you ask Cliff Harris, columnist for the Coeur d’Alene Press, you may hear a different answer. He’s spent 2,900 words across three straight Press columns alleging that “chemtrails” are streaks from government planes intentionally spraying toxic metals like aluminum. He condemns scientists for “PLAYING GOD” (his emphasis), foretelling scores of trees dying, others “exploding like Roman candles” in forest fires, of chemtrails contaminating soil and water, wreaking havoc with the climate, possibly causing dementia, autism, strokes and Alzheimer’s,

Yes, it’s a conspiracy theory, and an old one. The Air Force, NASA scientists, the EPA and scores of other experts call such claims a “hoax,” “nuts,” or even “evil.” (Harris says these groups are lying.) Long-lasting contrails aren’t sinister, scientists say, they’re just caused by specific atmospheric conditions.

Harris’s claims spawned a salvo of letters to the Press.

One guest editorial, by chemical engineer John Huckabay, savaged Harris’s science, explaining that metallic aluminum is not a heavy metal, does not have a half-life, is not soluble in water, has no link to Alzheimer’s, and would not make trees explode.

“I recognize that the Press has a disclaimer but this article should never have been published,” Huckabay writes.

Kelly McBride at the Poynter Institute, a nonprofit journalism school, says that on one hand, publishers in the past have turned away people who turned out to be right.

“[On the other hand], to the extent that you open up pages to unvetted, unverified information, you actually detract from dialogue in the community,” McBride says.

Coeur d’Alene Press managing editor Mike Patrick says that chemtrails are already being talked about, so it’s valuable to bring them up for debate.

Patrick says he’s interested in presenting both sides, pointing out that he published the chemical engineer’s rebuttal.

“It’s my decision to allow a climatologist to discuss whatever issues that he finds that his readers are wanting him to discuss,” Patrick says.

Even The Inlander discussed chemtrails in last year’s syndicated story on Project Censored’s list of underplayed news. But it did so skeptically — calling the “fringe” theory the best reason “why Project Censored has gained detractors even on the left in recent years.”

Far from distancing itself, the Press highlighted the issue in an online poll, asking whether readers were concerned about chemtrails (with over 300 votes, nearly 43 percent were). The Press published over twice as many words supporting the theory as it did against it.

Harris says he’s been with the Hagadone Newspaper Group — which publishes the Press — since 1971. “Despite what some people think, I’m not a kook, and I never have been,” Harris says. “I just decided to speak out after watching this for years.”

For Harris, the tipping point was What Are They Spraying, a documentary featuring lengthy interviews with G. Edward Griffin, who also hocks conspiracy theories on the Federal Reserve and cancer treatment.

Harris is not your usual weatherman. He majored in insurance law, not meteorology. Unlike the vast majority of scientists, he worries more about a new Ice Age than global warming. And he writes, in his columns, that more turbulent weather signals the beginning of a chaotic “tribulation” period before the second coming of Jesus.

“The WEATHER could turn out to both GOD’s and MANKIND’s ‘ULTIMATE WEAPON,’” he writes.

Jonathan Kay, author of Among the Truthers, says that, while studying conspiracy theorists, he’s noticed denial of conventional global-warming science may turn into a “gateway drug” to “more loony” conspiracy theories.

Yet, Kay writes that “it’s very rare that an otherwise respectable newspaper allows a columnist to continue on with a deliberate and sustained campaign of debunked conspiracism — such as promoting the quackery of G. Edward Griffin.”

Even more troubling, in his column, Harris quotes climate scientist David Keith as saying, “The U.S. and many NATO countries are spraying in order to save the planet from runaway global warming.”

But when emailed, Keith says that quote’s completely false. (An email to Patrick and calls to Harris yielded no response.*)

“Some of the other quotes look like stuff I said that has been twisted. This one looks more like pure fabrication,” Keith writes. “I have not seen any convincing evidence that chemtrails exist.”

It’s one thing for a columnist to write about a dubious conspiracy theory. A columnist using an invented quote from a respected scientist to support a theory that scientist adamantly denies? That’s another problem entirely.

A previous version of this story misstated whom we had called and whom we had emailed in response to David Keith's claims.

Allen and Mary Dee Dodge create wonder separately, and together, in their Coeur d'Alene-area home studios