Don't be scared of the authentic taco: Take a bite, no Spanish required 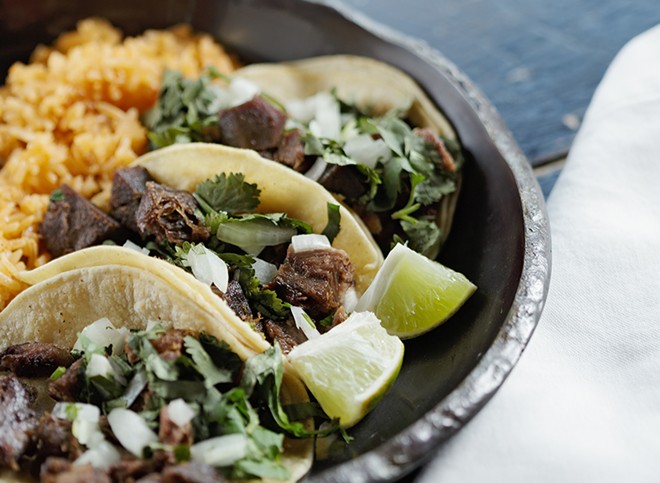 Every now and then a person needs some tongue. Cow tongue, that is. When chopped, seasoned, cooked, and gingerly placed in a warmed tortilla with cilantro, diced onion and a dribble of lime juice, one of the most deliciously authentic tacos has just been created.

Now, every sort of taco has its place. Some might find the deep-fried, two-for-a-dollar tacos at Jack in the Box to be the perfect choice at 2 am after a few drinks on the town. Fish and shrimp tacos have become a staple at many upscale bars looking to diversify their menus. Your mom's tacos with refried beans, sour cream, lettuce, meat and cheese bring you back to a happier time. But these aren't real tacos.

If you love tacos, take a break from the drive-throughs and your own stovetop and dive into the delectably authentic creations you can find right here in the Inland Northwest.

Claudia Escamilla knows all about making tacos the way they do in Mexico. Since 2008, the Tacos El Sol taco food truck, started by Escamilla's parents, has been feeding hungry lunchers (including Inlander staffers when the office was downtown) with gloriously authentic taco fare. Escamilla never fails to hear from people that what she serves from her truck isn't actually a taco. But in fact, Escamilla stipulates, what the taco truck sells is far more authentic than anything else folks may have eaten in the past.

Selling tongue tacos only on Thursday and Friday in order to keep costs low, she says that lengua, or tongue, is popular, but carne asada, or steak, is still what most people order.

"People think tongue will have a weird texture," she says. "But if I were to switch it out with carne asada, they probably wouldn't be able to tell the difference."

For the most indulgent meal ever, you could throw down at an insanely expensive and caloric restaurant, or you could gorge on the most authentically meaty Mexican tacos imaginable for a steal (running from $1.50-$3 at most places). It's the meat, in fact, that changes everything — and no, that doesn't mean carne asada.

Meat is what Tacos Tumbras does right. From the outside, its location on Second Ave. (there's another in Spokane Valley, along with two food trucks) doesn't tell people exactly what they'll experience upon walking in. An inviting cafe atmosphere run by the Zuniga family is what you'll find. The menu offers chorizo, al pastor, and lengua tacos like other restaurants in town, but what puts them above the pack is the inclusion of tripe, or intestines, and cabeza, beef head.

"We've always had these meats on the menu," says manager Jessell Zuniga. "For this area, people aren't always used to different things, but that's beginning to change."

Originally from Mexico City, the Zunigas had their eyes set on moving to Pullman, but were convinced otherwise when a friend informed them Spokane had a void where authentic Mexican food was concerned. The first Tacos Tumbras truck rolled out in 2004.

According to owner Carlos Zuniga, what makes his tacos special is where he originates.

"A lot of people tell me it's different even than other Mexican restaurants," he says. "That's because I'm from Mexico City, where flavors blur together because people come from all parts of Mexico. We also only use fresh produce here."

Biting into a taco filled with juicy tripe or cabeza may seem daunting, but there will always be a place for boring steak and chicken in your diet. Be bold. Don't be afraid to get your hands messy and make your own tongue happy. ♦