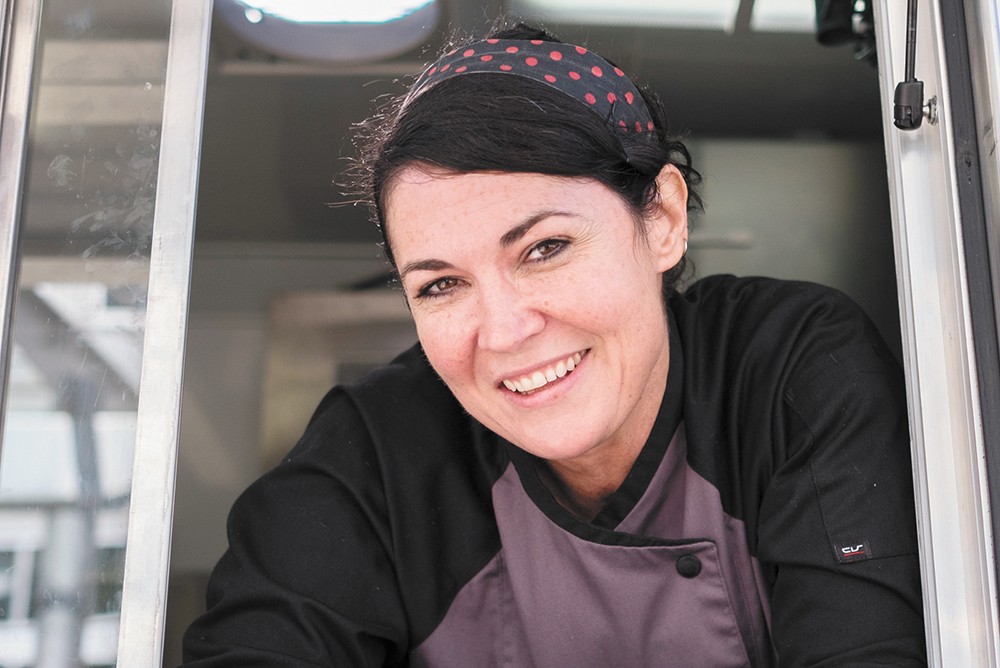 If food trucks had a theme song, it would probably be something like Toby Keith's "How Do Ya Like Me Now?!" (or even the Heavy's "How You Like Me Now?"). Either way, the sentiment is the same: If you haven't done curbside pickup before (or scoffed at it), now you know better. Dine-in customers are discovering what food truck fans already knew. Namely that ordering food online and picking it up is convenient, allows for plenty of flexibility, and can be easy on the wallet.

Meyer's Gourmet Sandwiches
7777 N. Heartland, Coeur d'Alene, 208-763-8771
Located most of the time at Prairie Pavilion in Hayden, Idaho, Meyer's Gourmet Sandwiches has seen a fairly steady curbside business since Idaho shut down March 25, according to owner Caleb Meyer. The recent reopening of the state has meant a small increase in sales, yet nowhere near their revenue he had this time last year, he says.

He thinks the prevalence of food trucks has helped people become more accustomed to the new way of eating — ordering and pickup. "It's a way to get restaurant-quality food and not have to sit in a dining room or compromise with fast food if you're on the move," he says.

And restaurant quality is what you'll get in the rotating menu, which might be a savory grilled Reuben sammie one day or the fairly standard bahn mi fries: a hefty portion of potato fries smothered in braised pork, jalapeno and a spicy-sweet chili sauce, topped with some crunchy pickled daikon radish and carrot ($8).

J&T Food Bunker
702 N. Spokane St., Post Falls, 208-763-8771
The Bunker Bar outside of which they're parked may have been forced to close during the earliest phase of Idaho's response to COVID, but the Army green food truck known as the J&T Food Bunker soldiered on. It's burgers and bar grub here, but made with gusto. For a burger to garner a few bucks more than what many fast food places serve for less, it better be good. Theirs are, specifically the General with a commanding stack of pulled pork, bacon, cheese and house-made onion strips on top of your juicy burger, then some ranch dressing and barbecue sauce for extra messy goodness ($9.50).

Shilla Korean BBQ with Seoul
1200 Fontaine Dr., Ponderay, 336-837-5488
Young chef Jeff Coleman is channeling his mother's and grandmother's recipes in this Korean street food truck, formerly located outside the 219 in Sandpoint and now in an easier-access RV lot in Ponderay. His bop bowls are full of veggies — some pickled, some wilted and some marinated — plus your choice of meat protein (did someone say pork belly?). Do the veggie ($8) and fried egg ($1) for a good summer meal that doesn't leave you logy.

Big Rod's Texas BBQ
Nine Mile Falls area, Facebook: BigRodsTexasBBQ
Barbecue is not for dainty eaters or appetites and Big Rod's is no exception. When you get tender bits of meat in your slow-cooked pork and beans, you know you're getting plenty for your pennies. Owner Rod Smith's "Texas-style" means smoked meat.

Farmer's Daughter Food Truck
farmersdaughterfood.com
Farmer's Daughter Food Truck founder Jillian Gay knows that good food doesn't come cheap. Her focus on organic ingredients — eggs, chicken, beef, potatoes — and from-scratch details like homemade jam requires more investment on her part and for customers. Regardless, her breakfast meals only run $8-9 and are both hearty and healthy. Have the burrito ($8) or the mouth-watering sausage or bacon egg and cheese sandwich on a rich, tender biscuit ($9).

"I needed to figure out a way to still operate since all of the larger events were canceled," says Gay, who hopes that the trend she's been seeing to express concern for others and help one another out will continue past the pandemic.

"That would be a wonderful silver lining." ♦