FOODIES AT THE FARM

Get out of the city heat and enjoy a night at the farm, with food and fresh air aplenty.

Located an easy 20-minute drive from the far northern city limits of Spokane, Mont Lamm Events in Clayton, Wash., (7501 Enoch Rd., just past Deer Park off Highway 395) invites the public to its monthly Farm to Table dinners, with three scheduled through this summer; on June 19, July 17 and Aug. 14.

Each of the five-course, locally sourced dinners are each created around a theme, with the menu and cooking overseen by a regional guest chef. For June's meal, Chef LJ Klink is overseeing a menu highlighting trout, with drink pairings from Spokane's River City Brewing Co. and Liberty Ciderworks.

Spokane Riverkeeper Jerry White is also on the June event's schedule to educate guests on the importance of protecting the river so that current and future generations can enjoy fish sourced from its waters.

"The whole heart behind [the series] is, first of all, Deer Park is a food desert and that's where we live closest to, and there is one grocery store," explains Mont Lamm co-owner Shannon Siemen, who owns the farm and event center with husband Sean.

"We want people to know there are a lot of farms in the area that sell great products, and they're no more expensive than the grocery store."

That said, the Mont Lamm dinner series only feature ingredients sourced within 50 miles of the farm, mainly from Heron Pond, Foote Hills and Urban Eden farms, along with other specialty food providers in that 50-mile radius.

The Siemens first had the idea for the farm-to-table series years ago after hosting similar dinners with friends when they still lived inside Spokane city limits.

"We started preparing food from the garden in our yard, and guests could only bring things grown on their yard or property," Shannon says.

The first of the series' dinners was hosted at Mont Lamm last December. The couple plan to continue hosting the series monthly for eight months of the year.

Meals are served inside Mont Lamm's barn-turned-event venue — it mostly hosts weddings this time of year — along two long, family-style tables that in total seat 60 attendees.

July's "Red, White and Brew" dinner takes on a patriotic theme, with a barbecue-centric menu also prepared by Chef Klink. During the height of summer's heat in August, the farm-to-table dinner is all about courses that are cool and crisp. Tickets for all three summer events can be purchased online ($25/children ages 14 and under; $65/adults) at montlammfarmtotable.com.

As part of the Coeur d'Alene Casino's second annual Farm to Fork food series, two notable cooking personalities are coming to share their tips and tricks in the kitchen: Top Chef's Antonia Lofaso, for a July 10 event, and Chef Cat Cora of Iron Chef, on Aug. 14. During the day, shop a local farmers market in the resort's Chinook Meadow, starting at 10 am. Then cap off the evening (7 pm) watching a culinary mastermind prepare some tasty bites live on stage. For Chef Cora's visit, a limited number of VIP packages are offered that include a wine dinner with the celeb chef. Details and ticket prices at cdacasino.com/farmtofork. 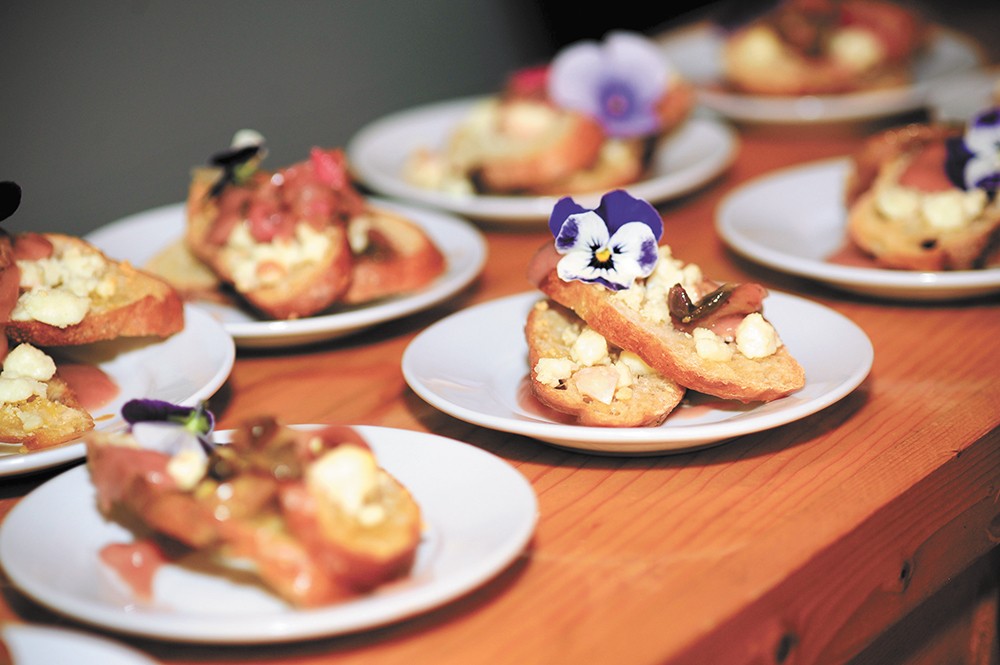 Escape the midweek humdrum for an evening in the picturesque lakeside town of Sandpoint, and head out on the water with Lake Pend Oreille Cruises. While there are many weekly and special cruise options to choose from throughout the summer, foodies won't want to miss the three evening-time Full Moon and Hors d'oeuvres Cruises offered June 19, July 19 and Aug. 17. Boarding at Sandpoint City Beach, the adults-only lake cruise offers complimentary snacks while gliding across the waters aboard the Shawnodese. Passengers have a good chance of spotting bald eagles in their lakeside habitat before the moon rises above the Cabinet Mountains. Reservations are recommended, and there's a 15-person minimum for the vessel to leave the dock. Tickets are $36; find out more at lakependoreillecruises.com. Also, since the two-hour cruises return after dark, plan to stay the night in Sandpoint, checking out the town's praised culinary and arts culture the following day.

Making at least one trip to Coeur d'Alene is basically a summer must-do for residents of the Inland Northwest, no matter what part of the region you call homebase. Whether going for a day on the water, or to dine, shop, or for a specific event, there's plenty of reasons to make the drive. Conveniently, the first weekend of August wraps up all of these things in one big package, with Art on the Green, the Coeur d'Alene Street Fair, and Taste of the Coeur d'Alenes. The latter festival is host to more than 250 food booths, sort of like the Lake City's version of Pig Out in the Park, Spokane's street food fest over Labor Day weekend. With a beer garden, live music and kids' activities, the event takes over Independence Point, between the Coeur d'Alene Resort and City Park, from Aug. 5-7.

To complete your summertime bucket list of eating through the Inland Northwest, you'd be remiss not to make a trip or two up to Green Bluff, where the orchards and fields are full of juicy, sweet harvests. During the end of June and early July, the Strawberry Celebration takes over the fields, with tons (literally) of you-pick and pre-picked berries for sale. A few weeks later, branches are dripping with ruby red gems during Cherry Season, celebrated during the last three weekends of July. The moment many fruit lovers wait for all year, Peach Season, begins in mid-August and runs until Labor Day. Beyond the ripe fruit, get your fill of cobbler, ice cream, cakes, pies and more. Find more details at greenbluffgrowers.com.

If you're not battling wasps, flies or mosquitoes, dining outdoors whenever possible is the way to go during summer's quick run. The restaurants of downtown Spokane are a great place to start — for any occasion — and several spots are offering new or remodeled outdoor dining options starting this season. Opening late last June, the Blackbird Tavern + Kitchen just north of the Spokane River boasts a sizeable patio that's pleasantly shaded by its home, the Broadview Dairy building, in the late afternoon and evening, and romantically lit by strung lights after dark. Also north of the river, the cozy, 36-seat Ruins recently added a handful of tables to a new patio space on the backside of the building, slightly expanding summer capacity at the popular, no-reservations spot. In the heart of downtown, 24 Taps Burgers & Brews is now serving its new, covered patio right on the corner of Lincoln and Riverside. 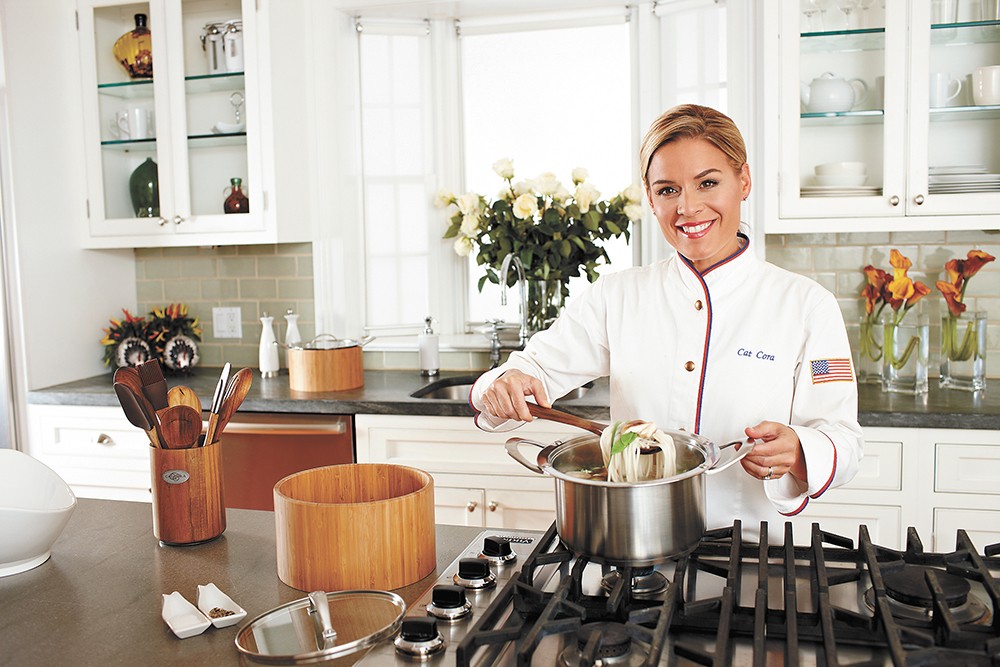 QUICK, COOL & GOOD FOR YOU

Since it's not exactly reasonable or healthy to eat ice cream every day to cool down, here's a better way to satisfy those cravings for icy treats, without all the extra fat and calories. Pre-made smoothie mixes are stupidly easy to make at home, and putting them together in advance cuts down on time and the need to always keep fresh ingredients around the house. Buy in bulk whatever types of fruit and veggies you like best (fresh or frozen) and a box of quart-size sandwich bags. Then, simply parse out a handful or so of each ingredient into the baggies, sealing them tight when done. Don't worry if you smash the contents — it's going into a blender, after all. When you're feeling hot and thirsty, grab a pre-made pack, toss it all in the blender and add water, juice, soymilk, coconut water, etc. Voila! You've got a cold and healthy summer treat to enjoy in the backyard, in less than five minutes. Good for a snack, or even a meal replacement.

Try my personal favorite combo, as follows: a good handful of fresh spinach; 5-6 strawberries, half a banana, cut into discs; a half-cup of pineapple and a dollop of vanilla yogurt (Greek or regular, whatever you prefer). Add water, orange juice or a combination of the two before blending. Pro tip: If the frozen ingredients are too clumped together to blend, try leaving the pack on the counter for a few minutes to let it soften.

When the temps get into the 90s, who can resist the urge for something cold and sweet? Once you imagine how the sugary, icy goodness coats your tongue in a cool, creamy embrace, there's no denying it — you need ice cream. Lucky for us all, the options to enjoy the season's favorite indulgence have impressively expanded across the Inland Northwest since last summer, adding to the list of tried-and-true, local staples.

Just in time for summer, the creative ice cream purveyors at Brain Freeze Creamery debuted both their mobile ice cream truck — look for the navy-and-orange vehicle at events and farmers markets around the area — and a new South Hill location, at 1230 S. Grand Blvd., replacing a spot farther south. The creamery's original Kendall Yards retail space remains another spot to grab a cone on a hot day.

Over in North Idaho, the Lake City recently welcomed not one, but two, new ice cream spots for locals and lake-goers alike to treat themselves. Small batch, locally-sourced ice cream at the new Abi's Ice Cream (112 N. Fourth St.) comes in flavors like coffee toffee chip and brown sugar ginger caramel swirl. Plus, it's all made fresh in-house daily.

Also new to town in Coeur d'Alene, is Montana-based Sweet Peaks Ice Cream (108 N. Fourth), which opened in April just across the street from Abi's (no one's judging if you hit up both in the same day). With its milk and cream coming from the Big Sky state, Sweet Peaks' owners focus on creative, local ingredient combos, like an ice cream made with a regional beer.

Sort of like ice cream in disguise — because it's not actually ice cream, though its characteristics are a pretty good stand-in — is the shaved ice at 40 Below in North Spokane. At the Five Mile Shopping Center (1902 W. Francis), the "snow fluff" spot serves up flavored, frozen hemp milk (which is gluten- and lactose-free) in a variety of flavors, with fruit and candy toppings galore. Snow fluff is a desert hybrid somewhere between froyo and ice cream, and it's actually pretty low-calorie — a bonus if the aforementioned options seem too indulgent. ♦