For more than 25 years, Guster has been on the everlasting quest for pop with a purpose 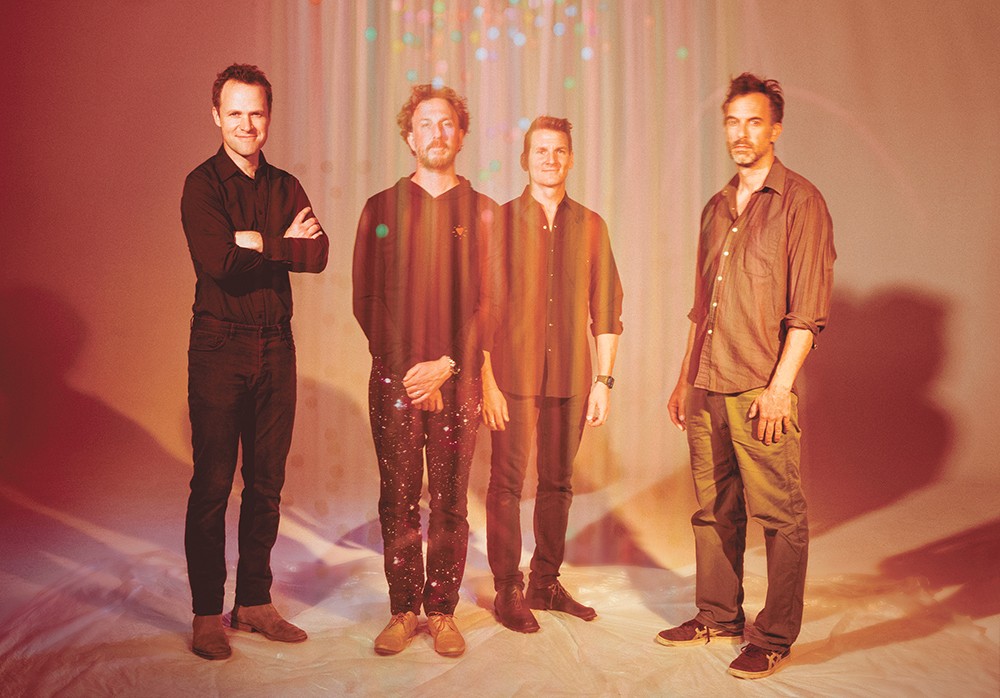 When three college buddies at Tufts University started a band called Guster in the early '90s, there's no way they could have known they'd still be on the road together two and a half decades later. Founding members Ryan Miller, Adam Gardner and Brian Rosenworcel — alongside multi-instrumentalist Luke Reynolds — have developed a low-key following for their melodic, tightly controlled songs, and now they're touring behind their eighth studio album Look Alive.

Miller, Guster's frontman and guitarist, spoke to the Inlander in anticipation of the band's upcoming concert at the Bing. As he walked around San Francisco, where Guster was about to play its third sold-out show in a week, Miller talked about the icy production style of the latest album, his ever-evolving collaboration with his bandmates, and how the state of the world creeps into his songwriting. (Responses have been edited for space.)

INLANDER: You've been playing with a couple of these guys for more than 25 years. How have those relationships changed?

MILLER: It's beyond family. You can't choose your family, but we can choose to be in this relationship. We met when we were — well, I was 18 years old when I met these guys, and now I'm 46, and we pretty much started playing music from the day we met. So yeah, do the math. It's incredibly intense and very rewarding and very complicated, but at this exact point in our career, we're getting along really well and we're proud of the music we're making.

How did this new album, Look Alive, come together?

I think every record we kind of have to do a gut check — "OK, what do we wanna do? How do we want to do it? How's it going to work?" It's three or four years between records, but we're writing that whole time. It's a lot of writing until we feel like we have enough songs we want to record, and then there's the whole process of finding who our collaborators are going to be, and we found a real interesting and inspiring one in our producer, Leo Abrahams.

What made you gravitate toward him?

I had heard of him through a mutual friend. He wasn't a producer that made, like, 25 records a year; he's pretty choosy. But it was really a conversation we had on the phone. He was remarking how our records sounded warm and vintage-y, and he was more interested in cold and icy sounds. That really crystallized what my thinking was. We really make an effort to not repeat ourselves sonically, and not make the same record more than once. We got in the studio, and within three or four days it was clear we were in some uncharted territory in terms of his bag of tricks. It was really quite magical, and we hadn't locked in with a producer like that since we made a record with Steve Lillywhite in 1999.

I hear themes of optimism running through the album, or of people struggling toward positivity. Is that an accurate reading?

I definitely think the optimism is a real thing I was trying to put forward, so I'm glad that's something you're picking up on. A lot of this was written against a backdrop of Trumpism and what I think of as the order of the universe being momentarily toppled, where good begets good and the arc of history bends toward the just. And I think there's some existential shit of being a middle-aged dad and being married for 13 years.

Do you think about big-picture themes when you're writing?

We're a pop band. We're writing three-and-a-half-minute pop songs. To me, the fact that there's these kind of doom-and-gloom lyrics on top of sunny melodies was always kind of a thing, but as a listener, I listen to lyrics, and the ones that have followed me through my life tend to mean something. So I think there is a general quest for meaning in the songs, at least to me.

Guster has become known for its live shows, and a lot of recordings are available to stream. Is that the best way to experience your music?

I definitely wouldn't say it's best. It's completely other in a lot of ways. The live thing is so much about energy — the energy we're putting out, the energy the crowd's putting back. It's that little feedback loop that's happening. The songs are the delivery method for that energy. On record, there's some kind of energy happening, too, but it's so indirect. I don't think of it as a hierarchical thing in terms of "best." ... Our records are labored over. There's not a note out of place; there's nothing accidental on our records. Especially this last one — it's so molecular and granular, these little blips and blops. That's not happening live. It's gotta ride on a different thing. ♦