For more than 45 years, Harold's Sewing and Vacuum has been keeping your appliances in tip-top shape - and out of landfills

If something goes wrong with your vacuum — it seems to have lost its suction, or it's not turning on — what do you do? Perhaps you retreat to a YouTube video or WikiHow article to try to fix the machine yourself. But you'll most likely decide to kick it to the curb and start scrolling through Amazon to find a cheap replacement.

However, if you're smart, you'd turn to a local repair shop like Harold's Sewing and Vacuum Center, which knows its way around a Hoover. Owner Marc Turbyfill, who has operated the shop on Northwest Boulevard since 1998, says that clogs are the most common causes of a vacuum on the fritz — something that shouldn't have been sucked up into the vacuum.

Harold's services about 20 or 25 sewing machines and vacuums a month, and plenty of their customers have been showing up regularly for years. They also sell individual parts for those who want to do their repairs themselves, refurbish used vacuums and sewing machines, and Turbyfill says he will occasionally do an odd job like reattaching a cord to a lamp or an iron.

Since taking over the business 21 years ago, Turbyfill has been the sole employee of Harold's, save for the occasional apprentice who enjoys tinkering in the shop and a contractor who regularly works on sewing machines before business hours. Turbyfill started working in a vacuum repair shop when he was in high school, then as a mechanic at a Sears center, and later did part-time work for the shop's original owner — the titular Harold — who had opened the store in 1973 after getting out of the Air Force.

The key to becoming a master mechanic, Turbyfill says, is simply getting your hands dirty.

"Like anything else, you gotta know how [the machines] work, and you've got to know certain models," he says. He acknowledges that the general quality of vacuums isn't what it used to be — most of them are produced quickly and cheaply overseas — but most of the problems remain the same. He says he's pulled all manner of things out of vacuums, from socks and underwear to plastic wrappers to animal droppings. The main problem, he says, is that people don't maintain their vacuums, clean them regularly or have them serviced, all of which can increase the machine's lifespan.

The small store itself is almost like a vacuum museum, with different models from all kinds of eras filling every nook and cranny: In one corner, there's a selection of new Simplicity brand vacuums, next to a vintage capsule-shaped Electrolux that's as sleek as a '60s Cadillac. There's also an eye-catchingly pink General Electric vacuum that looks like something straight out of The Jetsons. Turbyfill seems to know the history of each of them, too, including the sewing machines: He pulls out a portable Singer sewing machine from 1938, which not only still works but is actually lighter and more convenient than a number of contemporary models. Sometimes, Turbyfill says, customers bring in machines even older than that, the kind that are powered by pedals.

Obviously there have been updates to vacuum and sewing machine technology, but the basics of how these machines work really haven't changed much.

"Vacuum cleaners have always been around, and people need them," Turbyfill says. "People ask me all the time, 'What's the best vacuum?' And they're all good if they work. If you change the belt and empty the bag and clean the filters, it will work."

Turbyfill says that new customers are still finding Harold's and they usually come in because of word of mouth. The secret to their longevity? Consistency.

"If we did do something wrong, we'll fix it without charging," he says. "We stand by our work." ♦ 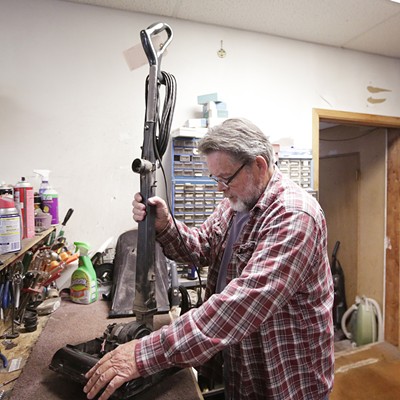 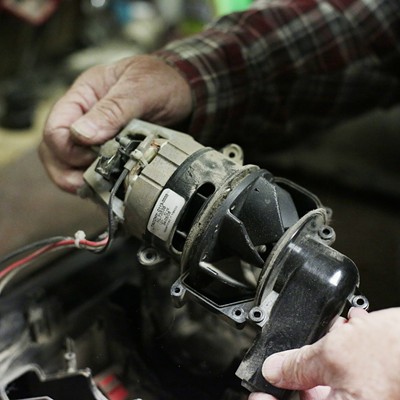 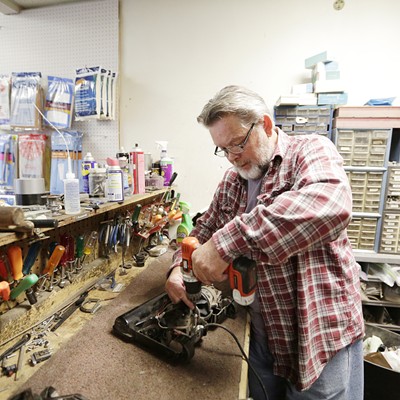 The original print version of this article was headlined "Man vs. Machine"