For some people, Hoopfest has been an annual tradition since year one 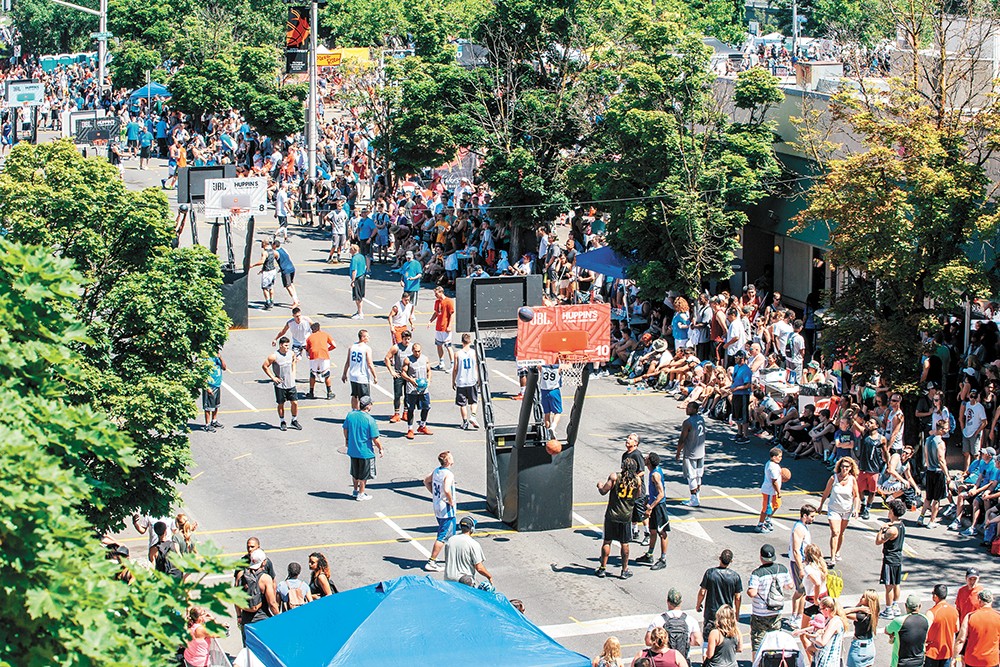 The doctor's message couldn't be more clear. No matter how determined Kim Eng was to play in Hoopfest, a C-section to deliver her son less than a month before meant Eng would have to stick to the sidelines, just this once.

Call it a testament to Eng's powers of persuasion, or the innate understanding and give-and-take between a woman and her doctor, but Eng didn't miss that year's Hoopfest.

"She found some sort of abdomen wrap that I used," Eng says. "After I'd play a game, I'd run over and breastfeed my baby, all sweaty. Then I'd play another game, and then run to where my mom was holding my baby and feed him again. All while trying to keep my insides inside me."

Basketball, and Hoopfest more specifically, inspires a crazed kind of dedication among its practitioners, and Eng is one of a crew of just 45 ballers who have played in every single Hoopfest since its inception 30 years ago.

The 48-year-old Eng grew up in Spokane and played basketball for Lewis & Clark High School. The first Hoopfest happened right as she finished high school, and although she left town for college and never moved back, she's always made the trek back to the Lilac City to play in the 3-on-3 tourney, starting with her first summer of college.

She's played in the women's division, then the co-ed division when she teamed up with her husband, and now she coaches her son and his friends when the family drives over each year from their West Side home. The tournament has become an excuse for Eng's extended family to get together as her mom hosts an open house party through the weekend. "Whenever the different teams end for the day, they descend on her house," Eng says. And when the basketball is done, the family heads over to Coeur d'Alene for the week of July 4, extending the reunion.

Skip Templeton is another player who's competed in every year of Hoopfest. (He's also on the Hoopfest board of directors.) His streak started when a bunch of buddies working at the Bon Marché saw an ad for the first tournament and signed up. Now 58, Templeton's been able to keep playing year after year even as some of his buddies have been waylaid by bum knees, hips, backs — you know, aging.

Templeton is amazed at the growth of Hoopfest over the years, from a rag-tag event with 300 teams to 6,000 teams dotting Spokane, aided by thousands of volunteers. "A lot of events like this, they only last a few years," Templeton says. "Playing downtown with the streets closed off was something you never thought would happen."

Among the fondest memories for Templeton during his streak was winning the Family bracket playing alongside his two sons. And now he even has grandkids playing Hoopfest, making his a three-generation family of Hoopies.

Eng says that beyond the tourney's growth, she's most struck by how everyone from little kids to 90-year-olds participate, and everyone in between, from regular players to people who only pick up a ball once a year. And all the support those people get from Spokane in the form of volunteers, court monitors, court marshals — all the people needed to make Hoopfest happen — really strikes her as its most noteworthy feature after all these years.

"It's evolved," Eng says, "but the spirit of Hoopfest has always been there." ♦

The thousands of ballers who descend on downtown Spokane for Hoopfest compete for the love of the game, bragging rights with friends and, if you're in the Elite Divisions, a sweet dog tag by the Jewelry Design Center to show off their success.

This year's tags are a little more significant, though, and not just because it's Hoopfest's 30th anniversary. The tags — made of sterling silver dipped in 24K gold and featuring two diamonds — include a nod to Andrew Vathis, an avid Hoopfest participant (he played on the Ben & Jerry's Conehead team) and familiar South Hill Albertson's employee who was killed in a traffic accident over the winter. Hoopfest officials said at the time that the Special Olympics athlete should be considered "the official hype man of Hoopfest weekend" and noted that his team won the Loser King Bracket in 2018.

To commemorate Vathis, this year's Elite Division dog tags include a silhouette of Vathis, his initials and a quote he was fast to use during play: "Great shot!"