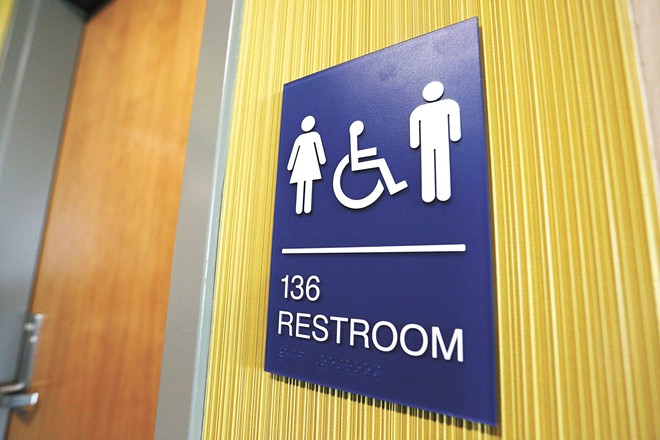 Young Kwak photo
A design solution: New middle schools like Shaw in Spokane have four gender-neutral bathrooms for students to use.

Each day this past spring, Jack, a transgender seventh-grader, would arrive at Sacajawea Middle School in Spokane knowing it would be at least six hours before he could use the bathroom again.

Using the girl's bathroom was a betrayal of his gender identity. A transgender boy using the boy's bathroom wasn't allowed, he says. And while Sacajawea has a gender-neutral bathroom, as required by law, Jack would have had to go to the nurse's office, ask for a key, and then be escorted to the bathroom every time he wanted to use it.

So Jack, who asked to use a fake name for his own privacy, avoided going to the bathroom at all. He wouldn't drink water, and if he felt like he had to go, he'd just hold it in.

"I didn't go to the bathroom the entire school year when we were in-person," Jack says.

For LGBTQ advocates, Jack's experience serves as a reminder that for some transgender students, returning to in-person school can cause stress and anxiety. While online learning presented its own challenges, Jack says it was still better than being in a school building where he didn't feel comfortable going to the bathroom.

The issue of access to bathrooms for transgender students has for years been a battlefront in the culture wars, with many conservative states and school districts opposed to trans students using bathrooms matching their identity. And even when laws are in place to prevent discrimination against transgender students — as in Washington — school buildings can often feel unsafe for transgender or non-binary students. Earlier this month, a video captured a transgender Salk Middle School student being assaulted as other students watched, according to KREM.

In a statement to the Inlander, Spokane Public Schools says it follows all Washington state laws and guidance "to ensure that all students are provided the supports needed to be successful in SPS schools."

"I think it's true for all cultural shifts — the rules and laws are one thing, but how it rolls out day-to-day can look really different," Sullivan says.

Online learning during the pandemic took a significant toll on the mental health of students across the country, with studies and surveys showing more students reporting stress and anxiety.

Transgender students already were more at risk for anxiety and depression than other students. And that trend continued in Washington during the pandemic, according to a COVID-19 student survey conducted earlier this spring by the state Office of the Superintendent of Public Instruction, Washington State Health Care Authority, the state health department and the University of Washington.

Compared to their peers, transgender middle and high school students during the pandemic reported more prolonged feelings of sadness and hopelessness, were more than three times as likely to experience suicidal ideation, and were far less likely to report having an adult they can turn to if needed, the survey showed.

That wouldn't come as too much of a surprise to Sullivan. In public spaces, transgender students can fear something as basic as whether they can use bathroom.

"Some of that went away during the pandemic because they have their own space at home," Sullivan says. "All of those fears of things happening in hallways and bathrooms melted away in the pandemic."

Matthew Barcus, program manager in Gonzaga University's LGBTQ+ Resource Center, agrees that for some students, remote learning can help eliminate some peer pressure and stress. Barcus, however, cautions that it depends on a student's home environment as well. Sometimes, a family may not be accepting of their child's gender identity, and supportive environments — such as a LGBTQ club in school — can feel safer.

Either way, Barcus stresses the importance of schools that welcome transgender students.

In 2016, the Obama administration issued a directive to schools saying transgender students should be allowed to use bathrooms in alignment with their gender identity. It drew swift condemnation from Republican leaders. Idaho's then-Gov. C.L. "Butch" Otter called it a "vast overreach" by the Obama administration creating "needless concern and confusion for students, parents and educators." When President Donald Trump took office, he reversed Obama-era protections for transgender students.

Earlier this year, President Joe Biden restored them. The U.S. Department of Education issued a directive that said discrimination based on sexual orientation or gender identity is a violation of Title IX, the federal law that protects against sex discrimination in schools.

Washington state laws already took that point of view. Unlike Idaho, Washington's non-discrimination laws include gender identity and expression. The state Office of the Superintendent says students have the right to be addressed by their preferred pronouns, for example. And public schools are required to allow students to use the bathrooms that match their gender identity.

In 2019, the Washington Legislature passed a law that requires school districts to formalize those protections in their policies and procedures — something Spokane Public Schools has already done.

But not every school district in the state has done so, says Sarah Alberston, director of equity and civil rights for the state Office of Superintendent of Public Instruction.

"We're still working to identify how many [have refused]," Albertson tells the Inlander.

Barcus says this isn't only important for students' mental health, but their physical health as well. If students are constantly under stress, it can affect their cardiovascular or cognitive health. If they're holding it in all day, it can damage a student's bladder or gastrointestinal systems.

"It really is important that students have access to facilities they need," Barcus says.

Sullivan urges more empathy for students unsure where to go to the bathroom.

"How would we feel if we had to question whether it was safe to utilize the restroom?" Sullivan asks.

This year, Jack started at a new school outside of Spokane Public Schools. The first week, the office secretary told him he could use whatever bathroom he felt comfortable in. Immediately, Jack felt better about where he was.

"It helps a lot, because it's just like a basic human thing," Jack says.

Jack thinks one thing that may have helped at Sacajawea is if there were simply more gender-neutral bathrooms available.

And in the coming years, there will be. In Spokane Public Schools, all of the new buildings will have single-occupancy bathrooms located in easy-to-access public spaces, says Sandra Jarrard, spokesperson for the school district. The district is in the process of building three new middle schools and replacing three others, including the Sacajawea building.

Shaw Middle School just opened this year with a brand new building, and principal Jon Swett says it makes it easier on transgender students. Hallways still have gender-segregated bathrooms, but the school is designed to have four "neighborhoods," and each neighborhood has four classrooms, a so-called "living room" and a gender-neutral bathroom.

Swett says it was designed intentionally that way, in part to make bathroom access easier for transgender students.

Now, he says, there isn't always a need for a conversation with a trans student about bathroom access.

"They all have access to a bathroom that's not designated male or female in their 'neighborhood,' where they have a group of kids who are part of the Shaw family and a group of adults that care for them," he says. "It's all right there."

Still, if there aren't bathrooms like that available in a new building, advocates say transgender students should still be able to feel welcomed even if there are gender-segregated facilities.

Seemingly small gestures can help, Sullivan says. It could be a PRIDE flag at the school, or a sticker in a teacher's classroom. Even just a pronoun button.

"Having those pieces makes them feel more comfortable in school buildings," Sullivan says.

By the same token, they also notice rhetoric against transgender students, Sullivan says. They know when school board candidates are against trans students using bathrooms matching their identity, for example. They hear it when other students and teachers make similar comments.

"If that's the rhetoric," Sullivan says, "they are definitely not going to be comfortable." ♦