For Whom the Bike Tolls

A ghost bike appears in Spokane. Leaders ponder the next move. 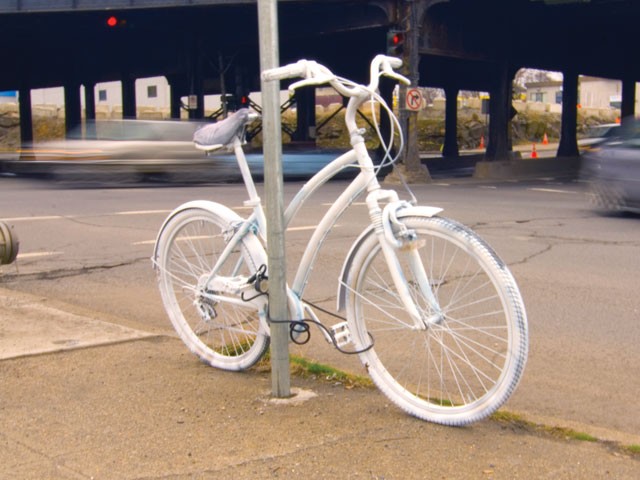 A stark reminder of last week’s bicycle fatality stands at the intersection of Division and Sprague in downtown Spokane — an abandoned bike painted completely white and locked to a street sign.

The “ghost bike” is a memorial to David Squires, who was killed last week at the busy intersection when Scott Reckford hit him with a pickup, police say. Reckford, a bar owner, failed a sobriety test after the incident and was charged with vehicular homicide and a felony hit and run.

Though Squires’ friends and family are still grieving, the memorial was erected and the crime addressed. But some are wondering if it’s enough.

“Nationwide, we have 400 cyclist and pedestrian deaths a month,” says Gail Prosser, who sits on both the city’s planning commission and its Pedestrian, Transportation and Traffic Committee. “Nationally, 76,000 pedestrians have been killed in our country in the last 15 years. It’s such an insidious thing because it happens one at a time, two at a time. If there were any other type of transportation that had those numbers, people would be outraged.”

“My concern,” says Spokane City Councilman Jon Snyder, who painted and placed the ghost bike, “is that whenever a cyclist or pedestrian gets killed, there’s less attention paid to it than a vehicle death.”

Judging from a bill floating around the halls Olympia, Snyder’s right. House Bill 2225 was introduced last year after Cheney High School student Lorissa Green was killed at the intersection of U.S. Highway 195 and Cheney-Spokane Road. Her death prompted Reps. John Driscoll and Kevin Parker, both of Spokane, to introduce the bill, which would “design and construct a new, separated right turn lane at the intersection.”

“For the transportation committee, safety is priority No. 1 and this intersection is clearly too dangerous,” Driscoll said at the time. “I wish Lorissa’s tragedy could have been prevented, but I’ll be working to improve this intersection and avoid future deadly accidents.”

No such call to action has been issued yet after Squires’ death.

“You would have a hard time finding somebody that would agree that the intersection is safe,” Snyder says of Sprague and Division. In fact, just three days after the fatal incident, a semi-truck going west on Sprague ran into the railroad viaduct, leaving the truck’s back end dangling above the ground.

A recent post on Cycling Spokane asks if the intersection is “dangerous by design.” Comments and photos on the blog point out the proximity of turning lanes and crosswalks, as well as the faded street paint.

The post’s conclusion: “The design [of the intersection] allows no margin for error and poor sight lines while encouraging speed” — factors that in all likelihood led to Squires’ death.

“I can’t speak to the specifics,” Snyder says. “The driver failed a sobriety test. In that situation all bets are off. But could something have been done to make that intersection safer?”

“Complete streets are about balance. They’re not about cars going away. But we need to provide for all of our citizens,” she says. “Pedestrians, cyclists, handicapped, children and senior citizens.”

Though she’s not chair anymore, Prosser still sits on the city’s Pedestrian, Transportation and Traffic Committee. At its next meeting, the committee will likely vote on a Complete Streets resolution, sending it along to the city’s Community Assembly, which could then approve it and send it along to City Council, giving it a chance to become a citywide ordinance.

It already has one vote at City Hall.

“Thirty percent of our population can’t drive a car,” says Snyder, who championed a Complete Streets program in last year’s election. “That doesn’t mean that every street needs a bike lane or a pedestrian bridge. Every single street doesn’t need an enhancement. … But when these things happen, I look at all our street policies. I think, ‘Is there something we can be doing to make these interactions [between drivers, cyclists and pedestrians] safer?’”