MUSIC | Singer-songwriter Father John Misty (aka Josh Tillman) sings about eccentric, sad things like drugged-out hallucinations, the death of humanity and writer's block. His melodies and poetic lyrics stick with you long after you finish listening to one of his records. Last week, Fleet Foxes' former drummer released a new single called "BORED IN THE USA" (eat your heart out, Bruce Springsteen), and it's a wonderful continuation of his 2012 album Fear Fun. There's an Elton John feel to it with the piano instrumentation, but with a dose of weird (a laugh track) sprinkled in. The song will appear on Tillman's forthcoming album I Love You, Honeybear. 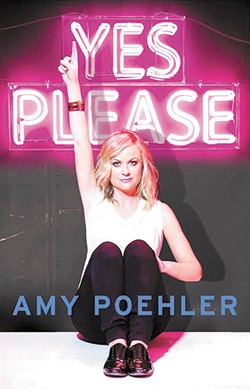 BOOK | If you're a funny lady with a TV show, it's important that you write an autobiography/collection of essays/self-help book: just look at Mindy Kaling, Tina Fey and Lena Dunham. Now Amy Poehler tries her hand at the format with YES PLEASE. Poehler admits she hopes that writing the book will get her an invite onto her hero Judge Judy's yacht. I have no doubt this whip-smart and poignant — albeit too long, at a padded 352 pages — book will not only get her on the TV judge's boat, but also boost her fan base. More of a collection of gained wisdom (on saying "sorry," divorce and child rearing) than anything else, it's not as hilarious as expected, and that's OK.

TV | No one likes an affair. We all know they're wrong and terrible. But they make movies and write books about them, and we tune in like the big suckers we are. In Showtime's THE AFFAIR, protagonists Alison (Ruth Wilson) and Noah (Dominic West) are married to other people. Noah even has four children. That doesn't stop the two from knocking boots one summer at a Long Island resort town, where he's staying with his rich in-laws and she's a townie. Told in flashbacks from both stars' points of view, we learn that someone has been murdered, and the mystery keeps you hooked. The performances are bold yet nuanced, but since the pilot the episodes have moved at a slow boil. Still, it's hard to look away. ♦