A funny read, watching the cops, and online ahhhhhs 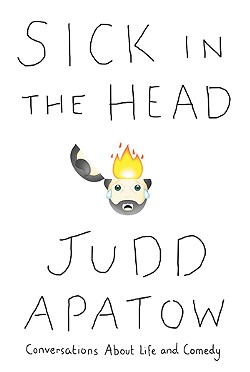 BOOKS | The man responsible for some of the funniest TV shows and movies in recent memory is coming out with a new book. Judd Apatow's (The 40-Year-Old Virgin, Freaks and Geeks, Bridesmaids) SICK IN THE HEAD: CONVERSATIONS ABOUT LIFE AND COMEDY features his recorded interviews with comedians spanning three decades and gives readers an intimate look at the world of comedy. Apatow began interviewing comedy greats for a radio show as a teenager, and has continued recording conversations through the years with the likes of Harold Ramis, Jerry Seinfeld, Chris Rock, Jim Carrey, Sarah Silverman, Seth Rogen, Steve Martin, Lena Dunham and others.

DATA | At a time when police use-of-force tactics are under heavy scrutiny, reliable data on police encounters is a premium. To that end, British national newspaper The Guardian has created an interactive database known as THE COUNTED that tracks deaths caused by law enforcement in the United States. Launched at the beginning of June, the site keeps a tally of total deaths at the hands of officers, as well as a breakdown of the numbers by state, per capita, race, gender, age and whether or not the person was armed. The database uses a combination of Guardian reporting and crowdsourced information.