TV | Slapstick comedy in the vein of The Naked Gun or Sledge Hammer! isn't for everyone, but if you love nonstop visual gags, double entendres and satirical versions of overly familiar genres, you might want to give TBS' ANGIE TRIBECA a try. Produced by Steve and Nancy Carell and starring Rashida Jones (The Office, Parks & Recreation) as a vet of the LAPD's Really Heinous Crimes Unit, the show follows its title character and her new partner Jay Geils as they solve cases involving dead bakers, murdered ventriloquists and the like. Among the cavalcade of guest stars on the show's first season are James Franco, Lisa Kudrow and Bill Murray. Season 1 is available on demand, and episodes air Mondays at 9 pm.

ALBUM | I'm a newbie to melodic metal band Baroness, and I can't deny the quartet's backstory isn't a big reason I gave their new album a spin. Back in 2012, the group led by songwriter John Baizley was in a horrible wreck while touring England, a crash that nearly killed everyone on the bus. The psychic scars of that experience are all over PURPLE, Baroness' new album that arrives with a new rhythm section and fresh approach to its technically precise, slightly psychedelic and emotionally euphoric songs like "Try to Disappear," "Kerosene" and "Desperation Burns." 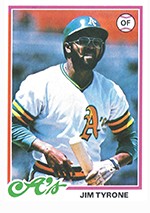 TWITTER | Baseball's spring training is right around the corner, which will no doubt please Dan Epstein, the pop culture-, music- and baseball-obsessed author of Big Hair and Plastic Grass: A Funky Ride Through Baseball and America in the Swinging '70s. For a smaller dose of the hardball ephemera that fills that book, check out his Twitter feed, @BIGHAIRPLASGRAS, where Epstein pays tribute to yesteryear's heroes and their amazing Afros, facial hair and noteworthy efforts in the game. ♦