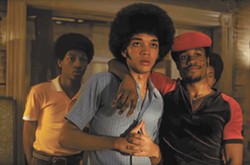 TV | His subject is love. Love of life and self and others. But often Australian director Baz Luhrmann, who co-created the Netflix original series THE GET DOWN with Pulitzer-winning playwright Stephen Adly Guirgis, doesn't give us happy endings and easy answers. Like some of his previous films — the beautifully made Romeo + Juliet, The Great Gatsby and Moulin Rouge! — The Get Down focuses on the attempt to find happiness against all odds. In this case, that means a fictionalized tale of the origins of hip-hop music in the Bronx in the late 1970s, mixed in with a West Side Story-style love story. All of the relatively unknown young actors are great here, and Luhrmann's quick editing style is at its best for these first six episodes.

PODCAST | Thanks to the Rio Olympics and Simone Biles' gold medal run, gymnastics is currently on the radar of many Americans. For those looking for a way to stay connected to the sport between Olympics, the GYMCASTIC podcast is here to offer competition insight, along with interviews with famous gymnasts — McKayla Maroney, a U.S. silver medalist in the vault in the 2012 London Olympics, first announced her retirement on the podcast earlier this year. Much of what the commentators discuss may be lost on those unfamiliar with gymnastics terminology, but because it isn't dumbed down, you'll feel that much more knowledgeable.

ALBUM | Witnessing J Mascis' high-flying guitar skills firsthand is one of the truly magical experiences in music today. He's been entirely comfortable rocking out loud as hell on stage since 1984, mostly with his band Dinosaur Jr. He'll close his eyes and make few movements while playing as many notes as possible. This month, the western Massachusetts alt-rock band released their 11th studio album, GIVE A GLIMPSE OF WHAT YER NOT. While it's certainly more of the same, it's another chance to hear Mascis' guitar antics. Start with "I Told Everyone" and go from there. ♦