PODCAST | Spokane County Sheriff Ozzie Knezovich has never shied away from media attention. The three-term Republican sheriff is quick to call an afternoon press conference when issues of public importance pop up and never afraid to speak his mind on all things law enforcement. So it should come as no surprise that Knezovich hosts his own radio program in partnership with KTRW called "SHERIFF'S REPORT WITH OZZIE KNEZOVICH." During the 30-minute show, the sheriff has touched on topics ranging from the Spokane County Jail and the investigation into Spokane Valley teen Ryan Holyk's death to the County Commissioner races. You can listen at 1:30 pm every day on 96.5 FM and at 630 AM on Saturdays. You can also stream and/or download the program at spokanetalksonline.com.

TWITTER | If you're like me, a St. Louis native and NFL orphan now that the freakin' Rams are stinking it up in Los Angeles, FANTASY FOOTBALL is my only reason to get excited about the NFL. And as the Ten Commandments of Fantasy Football instruct: "Thou must be on Twitter, where all news breaks first." So, a few suggestions for fantasy football follows: Jody Smith (@JodySmithNFL), co-owner and managing editor of the Gridiron Experts website for insightful tips and commentary. Will Carroll, formerly of Sports Illustrated and Bleacher Report, runs @injuryexpert. And finally, Patrick Daugherty (@RotoPat) writes about the NFL for Rotoworld and is a reliable follow for humor and insight. 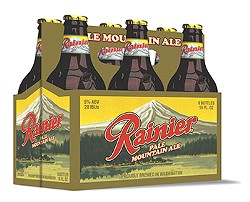 BEER | In the world of Northwest beer, Rainier has held steady as the working-class standard. This year, for the first time in two decades, Rainier (which is owned by Pabst Brewing Co.) released a new brew: PALE MOUNTAIN ALE. The new beer is currently in bars and stores in the area, but I first had the chance to try the crisp, malty ale last week at the Observatory. It's got a red tint and is inspired by pale ales the company brewed before Prohibition. The Pale Mountain Ale comes in a 16-ounce bottle with some retro graphics on the label. And unlike Rainier lager, it's actually brewed in Washington. ♦