FILM | Some of the most interesting and vibrant contemporary cinema is coming out of South Korea, and one of the country's most beloved filmmakers, Bong Joon-ho, has a new movie now streaming on Netflix. OKJA continues the director's propensity for successfully mashing up seemingly incompatible genres: It's an evisceration of corporate soullessness disguised as a wry, Spielbergian fantasy, in which a Korean girl attempts to rescue her pet super-pig from the meat packing plant that genetically created it. Like the train-bound dystopia of Bong's previous feature, Snowpiercer, the film's satire is almost cartoonishly broad, but it's definitely not timid and it's certainly not boring.

ALBUM | At only 24, Vince Staples is already one of the most interesting rappers to come out of Long Beach, California, in recent years. His latest release, BIG FISH THEORY, is your standard sophomore record, the portrait of a young artist who's "countin' up hundreds by the thousands" but still can't find stability, creative or romantically. ("Love can be disheartening, darling," Staples laconically observes.) Unlike his sprawling, two-disc debut LP Summertime '06, this one is refreshingly lean, packing cameos both expected (Kendrick Lamar, ASAP Rocky) and not (Blur's Damon Albarn, a posthumous appearance from Amy Winehouse) and a number of complex themes into a woozy, diverse 36 minutes. 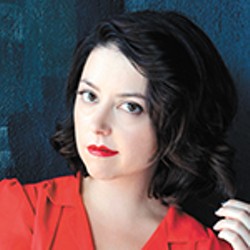 PODCAST | Like Karina Longworth, the host of YOU MUST REMEMBER THIS, I'm a sucker for dark Hollywood lore, so it's always exciting when a new episode of her exhaustively researched podcast, devoted to turning over Tinseltown rocks and exploring the corruption squirming underneath, pops up on my phone. Each season of the show has followed a different theme, and the current one, which premiered in late June, takes on the respective (and sometimes remarkably similar) career trajectories of Jane Fonda, still active in film and TV, and Iowa farm girl-turned-French New Wave icon Jean Seberg, who committed suicide in 1979. It's fascinating and empathetic nonfiction storytelling. ♦