Queens of the Stone Age are back, more Cash and smoke signals 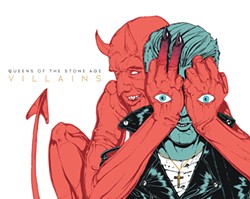 ALBUM | Play the last minute of "The Evil Has Landed," the penultimate song on the new Queens of the Stone Age album, VILLAINS, and you'll hear the quintessential stoner rock that the band has perfected. The song unleashes a raw, pounding guitar riff as lead singer Josh Homme moans "Here we come / Get outta the way." It might be a moment that fans of early Queens of the Stone Age work crave more of in Villains. But the album is so polished and dynamic, from banging opener "Feet Don't Fail Me" to the melodic closer "Villains of Circumstance," that releasing the band's full power, if only momentarily, packs a heavy punch. Villains shows a more accessible side of Queens of the Stone Age, only to guide us to the place where the band felt most comfortable all along.

PODCAST | Comedian Cash Levy, who recently played the Spokane Comedy Club, can't do what he calls "hot, tasty" Cashing in With T.J. Miller podcasts without T.J. Miller there to participate. But don't worry: Levy cares about his fans. Miller and Levy can't always get together for a new Cashing In, but Levy started another podcast, CASH WITHDRAWAL, for anyone feeling neglected. It's an hour of comedy with varying guests, and any Cashing In fans should give it a listen.

BLOG | As fall approaches, you'd think that Washington state wouldn't have to worry about being suffocated by wildfire smoke. But after nearly a week of smoke filling the air early this month, with the worst air quality in decades, nothing is off the table. Fortunately, county, state and federal agencies have come together to form a blog to answer all of your questions about wildfire smoke in washington. It's called WASHINGTON SMOKE INFORMATION (wasmoke.blogspot.com), and it delivers all of the information about air quality, the forecasts, and the maps that you would ever want while smoke is in the air. ♦