For Catholics, Lent is a whole lot more than just a second stab at a New Year's resolution

Paige Holy is like any 24-year-old second-year law student, busy nonstop. But amid the onslaught of papers and exams at Gonzaga University School of Law she will, as she has since childhood, observe the season of Lent — all 40 days of it.

An important part of the Catholic, Orthodox and Protestant liturgical calendar, Lent begins on Ash Wednesday, which arrived earlier this week, and runs until Easter. In the Catholic tradition, that means giving something up of significance for the duration of Lent. For a lot of people, that something is a favorite food or other indulgence.

This year, Holy (pronounced Holly), a Roman Catholic, has chosen to abstain from alcohol for Lent — but, she's quick to point out, not her social life.

"In the past I've given up sweets; I think that's a very traditional one," says Holy over Guinness-battered fish and chips at O'Doherty's Irish Grille in downtown Spokane. "I don't anticipate giving up alcohol will be easy. If it were easy I wouldn't have to give it up. It's not just about giving up bad habits. It's about letting go of things I'm attached to, focus on Jesus and prepare for Easter."

But people who aren't Catholic, or even religious, have leaped onto the Lenten bandwagon as well, choosing to give things up as they would for a New Year's resolution. Last year, Twitter was awash in Lent-themed tweets, and as the website openbible.info discovered, food was the No. 1 category of things people said — in 140 characters or less — that they would give up. Father Jack Bentz, the Vocation Director for Jesuits in the Northwest and chaplain of the GU School of Law, says that's missing the point.

"Giving up something for Lent has more to do with making space for spiritual guidance," Bentz says.

As food is something people encounter daily it's an obvious thing to give up, but according to Bentz it's more about a routine. For instance, people who drink coffee every morning may choose to give that up, but instead of the daily ritual of brewing and sipping, they could use that time to meditate and pray.

Not only do Catholics routinely give up something for Lent, there's also the element of avoiding meat on Fridays, opting for fish instead.

"It's a very old definition of meat. It was a common and popular understanding that only included four-footed animals that lived on the land," says Eric Cunningham, an associate professor of history at Gonzaga University. 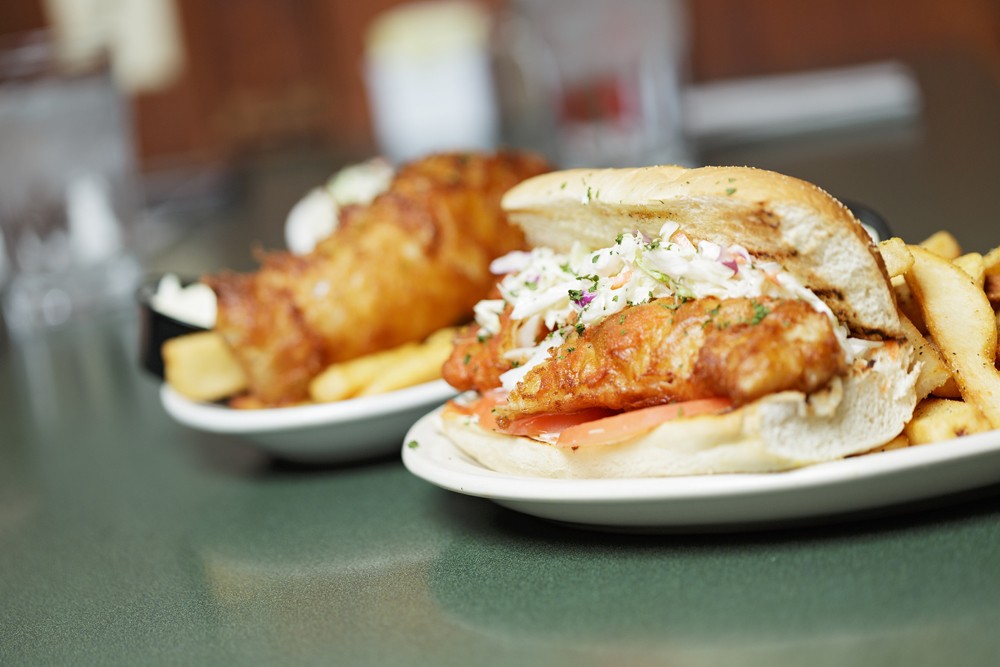 Young Kwak
A fish sandwich and an order of Guinness Fish and Chips at O'Doherty's Irish Grille.

With that definition, technically fish and even reptiles would be considered easy substitutes for meat by the church, says Cunningham, who is Byzantine Catholic. As far as Lent trends in popular culture are concerned, he says that stems from Western culture being a Catholic culture.

"It's really a hangover from the past," he says. "People, Catholic or not, are living it up on Mardi Gras, and then the next day, whether it's diet or drinking, they'll give something up, for a while anyway."

Holy recalls her family giving up meat on Fridays during Lent. Growing up in Calgary, Alberta (she has dual citizenship), her family would often have fish for Friday dinners, but other times they would have a simple meal of bread and meat-free soup, just to feel not quite as full.

"That physical hunger was representative of your spiritual hunger," Holy says.

She maintains that refraining from meat on Fridays is still a good practice, even if not all Catholics follow it. In the Byzantine Catholic church, which has Greek origins, they go a step further during Lent, choosing not to eat meat, dairy and eggs on Fridays and certain feast days.

"There are actually tremendous spiritual benefits to be had by denying the satisfaction of the will," Cunningham says of fasting.

But whether or not one chooses to give something up — food or otherwise — Lent holds a far deeper meaning to Catholics than the average person with a Twitter account.

"For me personally, Lent is about refocusing my priorities," Holy says. "It's easy in the day-to-day to be overwhelmed with life, but this is a time to put things in perspective again [and] ask myself, how am I loving others?" ♦