Light is the key element of this piece. A blue glow emanates from the internally lit cast-glass books on the shelves of this open-air reading room on Washington State University's Riverpoint Campus. Students and faculty often sit in the oversized granite armchairs facing the bronze coffee table and bookshelves just like Peter Reiquam wanted. Through the Washington State Arts Commission Percent for Art Project, the commissioned Seattle artist created Light Reading in 2006 to be a gathering place. The light works functionally to keep the space visible and sittable at night. Metaphorically, it symbolizes the illumination of ideas and knowledge, and the vertical bookcase makes reference to the Academic Center's glass entry nearby.

To commemorate Spokane's 100th birthday, a two-ton sculpture of stainless steel curves and angles was placed on the Spokane River in Riverfront Park. The Centennial Committee gave it as a gift to the city in 1982, funding the project mostly by selling 10,000 Centennial medallions. Harold Balazs — the man behind many iconic Spokane sculptures, such as the Rotary Riverfront Fountain — created this piece of nonrepresentational modern art. He chose steel so it would be reflective, and the shifting light from the water would constantly change the sculpture's appearance. When the committee chose Balazs, they asked that his piece illustrate the diversity in Spokane's history and express a commitment to the future.

The Joy of Running Together by David Govedare

For Chewelah, Wash., artist David Govedare, Spokane's annual Bloomsday Run is all about sharing the experience with the multitude of runners around you, being part of the flow and not focusing on your aptitude. He made the Corten steel sculpture of 40 life-sized runners in motion in honor of Bloomsday in 1985, located along Spokane Falls Boulevard by City Hall, near where the finish line used to be. To Govedare, the race is important because it brings different people together. To make each sculpture, he chose people of various ethnicities and nationalities to pose against a wall, bathed in a bright light. He traced their exact silhouettes and transformed them into the steel runners, each in their own unique position.

The Lantern by Harold Balazs

This 32-foot-tall cement sculpture may look like a Chinese lantern, but Harold Balazs says when he made the untitled piece in 1974 he wasn't going for that, or anything at all. "The world is such a chaotic space," he says. "I just like getting a whole bunch of pieces that don't really go together and just jam them together." A group of Balazs' friends gave the sculpture — located along the Centennial Trail near the Opera House — to the city, mostly for Expo '74. Since, it has become a favorite among Spokanites. Some even attempt to climb it. Although scaling the massive artwork is forbidden, there's a message at the top awaiting those who do. 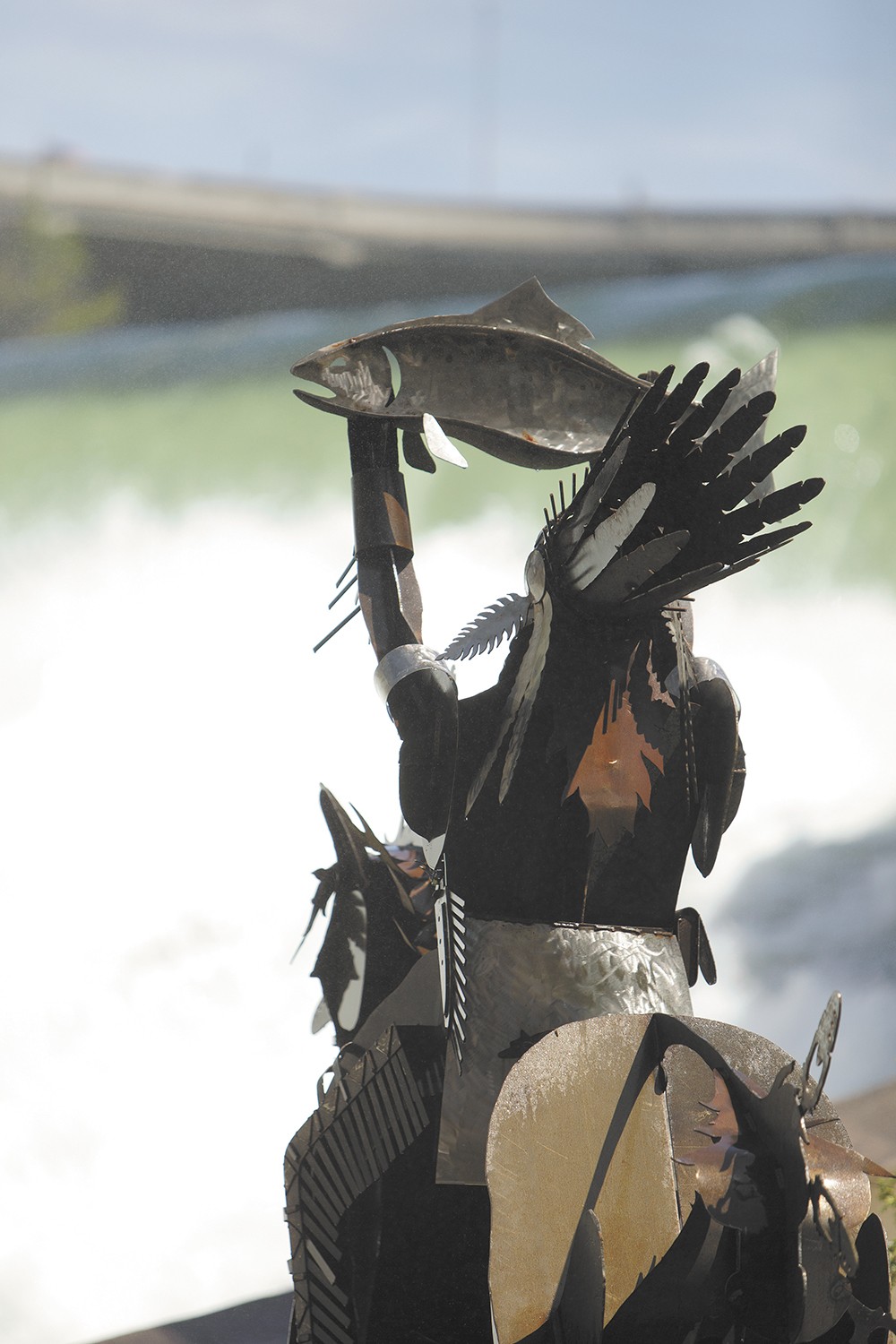 The Salmon Chief, located at Spokane's new Huntington Park along the lower falls of the Spokane River, raises a salmon to bless the river.

Along the lower falls of the Spokane River, a Native American sitting on his horse raises a salmon to bless the river. The 12-foot steel statue created by Virgil "Smoker" Marchand of the Colville Confederated Tribe was commissioned by Avista to be part of the Huntington Park redesign in May. That spot on the river served as a historic gathering spot for several Native American tribes in the region. One of the leaders, the salmon chief, would help divide up all of the salmon among the tribes, ensuring everyone would have enough to make it through winter. Across the gravel path stands more work from Smoker: two statues of Native American women hanging salmon to dry.

Kids scampering through Riverfront Park love Looff Carrousel and adore the giant red wagon; you can also find them hunting eagerly for bits of trash to feed the goat. Known affectionately as Spokane's garbage-eating goat, Sister Paula Turnbull's creation is one of the most popular remnants of Expo '74. The local nun and artist created the steel billy-goat sculpture for the environmentally themed World's Fair to keep the area clean and trash-free during the festivities. Nestled in its basalt-column grotto, the goat with a vacuum for a mouth happily sucks up any garbage you bring up to its chops after you press the nearby button. Over 40 years, it's gobbled almost 15,000 cubic yards of rubbish.