The drip, drip of problems with the Riverfront Park Rotary Fountain 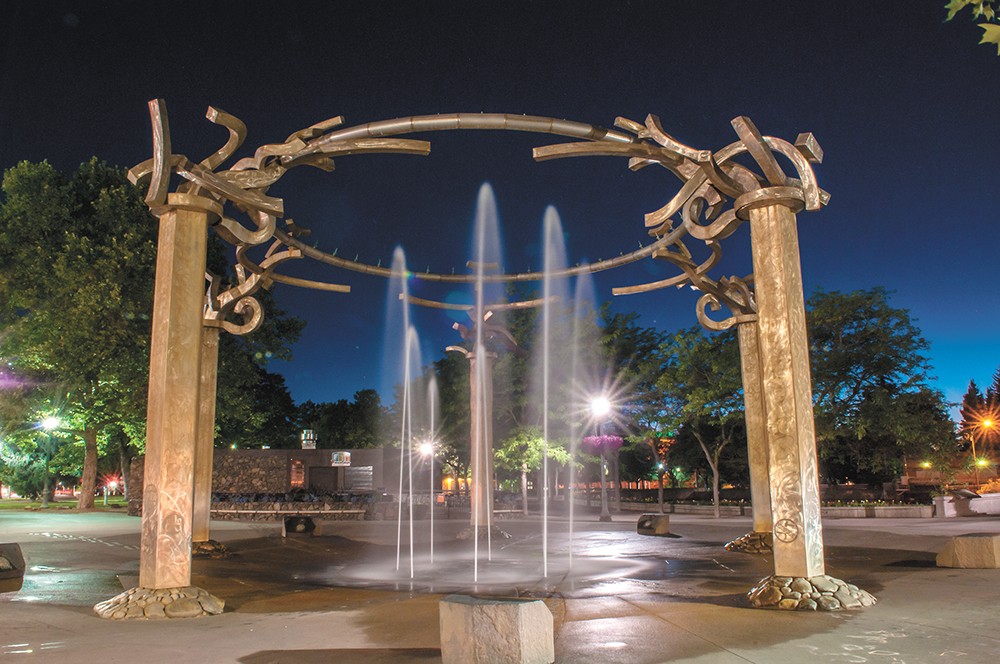 Dan Cadagan III knew that the price tag for the Riverfront Park Rotary Fountain was going to be steep.

After all, he helped Spokane Rotary Club 21 raise more than half of the fountain's cost.

"Man, water features are not cheap," he says.

Even before the first drop of water came out of the Rotary Fountain in 2005, it had cost the city more than anticipated.

When the fountain was constructed that year, it cost $150,000 more than originally envisioned, clocking in at $1.4 million. The Rotary raised $850,000, and the city used bond dollars to pay for the rest.

Consisting of five pillars topped with abstract shapes created by Spokane's famed sculptor Harold Balazs, the fountain has become the south-side gateway to Riverfront Park, and just as much of a landmark as the big red wagon or the Looff Carrousel. But lately, it's become a financial nightmare for the city.

"I assumed the design was such that it would last for decades," Cadagan says. "It would not have occurred to me, back in 2005, that 12 years later we're going to have to do major renovations."

When Hydro Dramatics, a national fountain consultant firm, examined the Rotary Fountain this February, the verdict was ugly.

The stainless steel columns, once shiny, were stained with rust. So was the concrete. The underground vault beneath the fountain had flooded, causing serious damage to the pumps and electrical controls.

Several lights didn't work, the Hydro Dramatics report said. An access cover was so warped, it couldn't close properly. Some water jets were inoperable, while others would shoot out water with a force that violated codes.

The solution called for a full-scale overhaul, redesigning "the entire pumping, piping, lighting, nozzles and controls" to meet newer codes, repair existing damage and avoid further problems. The proposed cost? $950,000, more than two-thirds what the fountain cost to construct.

That's left the Park Board to consider a few possibilities: Did the fountain have inherent design flaws? Did it receive the proper maintenance? Or — and this is the explanation favored by the Parks department — are interactive fountains just that expensive?

The notion of a fountain at the entrance of Riverfront Park had been pinging around since the park's creation for Expo '74, but it was former City Councilmember Dennis Hession, Cadagan says, who came back from a conference in 2001 having seen an interactive fountain and had the vision for creating one in Spokane.

The downtown Rotary Club had already been squirreling money away for a major project, and the fountain seemed like the perfect solution. They dreamed big.

Earlier versions of the Rotary Fountain website described a fountain that would emerge "from the grip of the sacred water snake of ancient Indian lore," while another would "rest on the back of a great turtle that, according to ancient Indian legend, supports the weight of the world." The fountain spray would be timed to lights and music, and during the winter, misters would transform its columns into ice sculptures.

Bit by bit, the plan was pared back. The fountain wouldn't have a water snake or a great turtle. It wouldn't turn into a ice sculpture in winter. Concerns over conflict with the carrousel's music caused designers to ditch the musical choreography of the streams.

Construction was plagued with nasty surprises. The moment the space for the fountain reservoir was dug, river water began rushing into the hole, forcing the contractor to scramble to rework the design to fix the problem.

But when the fountain was finally working, it gave supporters a chance to chide the naysayers who wanted to spend the money used to build it on homelessness or hiring cops.

"If you were of the opinion the interactive fountain was a bad idea, take another look at how a frivolous waste can become a fantastically grand idea," Spokesman-Review guest columnist Sandra Babcock wrote in 2006.

The fountain's troubles didn't stop when the water started flowing. In fact, the city made a mistake immediately, initially sending the wrong chemical mix through the pipes, tarnishing the steel.

Just last September, the city spent $6,000 to try to clean the concrete and steel — but the underlying stain remains. Leroy Eadie, director of Spokane Parks and Recreation, says the department considers the "patina" of rust to be permanent, and says the department does not intend to try to restore the fountain to its original metal sheen.

When the Rotary raised funds for the fountain's construction, the maintenance cost wasn't something the group was focused on.

"I don't recall that we had any estimates for what it might cost to maintain the thing," Cadagan says. The contract with Rotary and the city placed the entire burden of maintenance on the city the moment the fountain was dedicated.

Yet throughout its entire existence, the fountain has been plagued by one mishap after another.

In 2009, it was shut down for two days after a major electrical malfunction caused dangerous levels of chlorine to be injected into the water. The next year, it was shut down a month early because of a leak and a faulty computer system.

By the time 2013 rolled around, Parks had spent $485,000 to build a concessions and restroom plaza next to the fountain — partly to address state health code requirements that mandated bathrooms be no farther away than 100 feet from the fountain.

And while the media briefing touting the $64.3 million Riverfront Park bond ballot measure in 2014 was held in front of the fountain, the measure didn't include a dime targeted at fixing the fountain's internal issues.

"It didn't look like we needed to make a major investment at that time," Eadie says. But the fountain was closed for repairs during the start of July in 2015 and again for part of June in 2016.

"Potentially, we could have limped it along a couple of years more," says Eadie. But with the south side of the park being torn up for the rest of the project, it made sense to overhaul it now.

The department expects that at least some of the park bond money will be used to pay for the fountain repairs, though the board tabled details for how the fountain would be funded until a later date.

Eadie promises that the fountain overhaul won't take funding from art or other projects in the bond, though it may tap into unused bond contingencies.

The city doesn't yet have an estimate for how much it will have to pay to maintain the fountain in the future, but Eadie is optimistic that the improved fountain will require less maintenance, with new systems that allow it to be monitored remotely.

"Technology is on our side here," Eadie says. "We're going to use less water. We're able to enhance some of the pieces. The jets will be better. Lighting will be better."

Benches will be installed around the fountain to stop cyclists from zooming through it. Crucially, a backup sump pump, outfitted with an alarm, would be installed in the fountain's vault to prevent another expensive flooding disaster.

Still, Eadie rejects the idea that the fountain was poorly designed originally. Instead, he suggests that fountains, which require moving parts to constantly churn out chemically treated water, are inherently prone to breaking down.

"It's probably like owning a dog," says Deborah Daoust, spokeswoman for Seattle Center, which has several water features. "You pay $500 for a dog, and you [incorrectly] think that's your big expense."

Eadie notes that the city sets aside money every year in a maintenance fund for the SkyRide gondolas, and it could do the same for the fountain.

But even conservative City Councilman Mike Fagan, the liaison to the Park Board and a skeptic when it comes to spending taxpayer money, says that keeping the fountain is worth the cost.

"It's a landmark in the park, just as the vacuum goat is," he says. "More people love the Rotary Fountain than love the goat." ♦