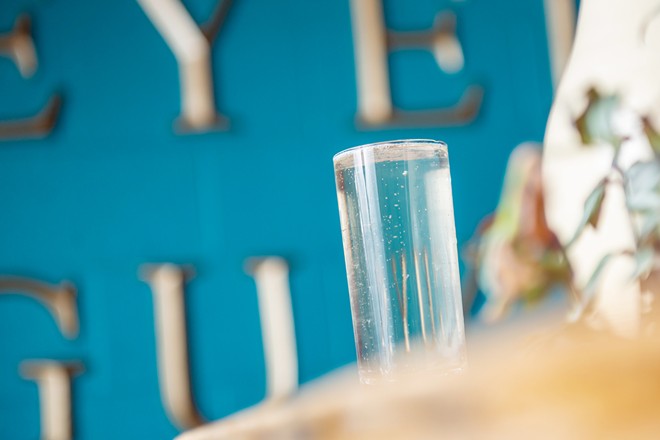 "At first it looked like a short trend, but now I don't think it's going anywhere," Rausch says. "I can see it being around forever."

The rise of the clear and bubbly alcoholic beverage may seem like it came out of nowhere, but its popularity has been brewing for decades. It's really just the latest evolution of similar malt beverages — consider the success of wine coolers and Coors' Zima in the '90s. White Claw, one of the first major hard seltzer brands to hit shelves five years ago, dominates the market today and is owned by Mark Anthony Brands International — notably the makers of Mike's Hard Lemonade.

The country's major commercial breweries have also jumped on the seltzer hype train. From Michelob Ultra to PBR, seemingly every major alcohol company has added seltzer in one form or another to its lineup. Truly, the second-biggest brand in hard seltzer, is owned by the Boston Beer Company.

In Spokane, Rausch says if there's something to learn from big beer, it's that they know when something is just a fad versus a genuine shift in the drinking culture. Seltzer, he says, is the latter.

The past couple years show that many craft brewers agree with Rausch. Turns out, much like big beer, craft breweries can't ignore the success of hard seltzer. It's no surprise given that the process is somewhat similar to brewing beer. It's considered by many a healthier alternative to beer. And, it's popularity is growing.

When Rausch and his wife, Hillary, opened Four-Eyed Guys last November, they knew they wanted to have seltzer options on tap. They both enjoy seltzer themselves, but they also know not everyone wants to just drink beer in 2021.

"It's just a good, clean drink. It finishes easy," he explains. "It's lower in calories than beer. It's a drink that doesn't make you feel as full as beer. For me, it's like eating sushi versus a hamburger."

Adding seltzer to his brewing repertoire wasn't an easy task for Rausch. He says the first batch came out completely wrong: "I think it ended up being 11 percent [alcohol by volume] somehow, and it just tasted terrible." It wasn't a total failure, though. He took it as a valuable lesson learned.

"It's definitely a learning curve," he adds.

Today, after a lot of research and some experience, Rausch has gotten a pretty good hang of crafting the fermented sugar water. Seltzer takes up five of his brewery's 13 current taps — alongside beers such as pilsner, hazy IPA and a tropical banana sour.

He's also used the time to explore unique flavor combinations. His current seltzer offerings include raspberry ginger, orange, lemon lavender, coconut and orange lime. At 6 percent alcohol by volume, they're all a lot lighter than his first attempt.

Four-Eyed Guys isn't the only Spokane brewery wanting to dip their toes into seltzer.

"People want to drink them, and people want to make them," Rausch says. "I've had breweries come ask me about the process."

They're also not the first.

No-Li Brewhouse, by far the Inland Northwest's largest commercial brewery, was the first in the region to become dedicated to seltzer. It launched the Day Fade line of hard seltzers early in 2019. The brand suitingly began with a huckleberry flavor, and has since expanded to four varieties, adding black cherry, mango and huckleberry lemonade. Available at select grocery stores throughout the area, each drink clocks in at 5 percent alcohol by volume, two carbs and 100 calories.

Genus Brewing in Spokane Valley started making seltzers in 2020. Rausch actually credits owner Peter McArthur for helping Four-Eyed Guys get into the seltzer game. On top of that, the brewery and supply shop also posted a video to its popular YouTube channel last month explaining the seltzer-making process.