All the years of driving and hitting potholes in the Spokane/CDA area sure takes a toll on your rig. Most of us have had to replace the shocks in our vehicles a few times because the old ones took a beating. The same is true for various parts on your body, like knees, shoulders and hips. All those hard-charging days you had in your younger years of playing sports can take a toll on your body later in life.

I have over 45 years of hard-charging skiing under my belt, and these past few seasons, the aches and pains in my knees have been getting progressively worse. It's safe to say my little red "Check Engine" light is starting to flicker more and more. The thought of a total knee replacement has been rolling around in that little noggin' of mine.

So, when my best friend and longtime skiing partner Dan Herby had his total knee replacement last spring, I paid special attention. Seeing how Dan handled it was key for me and my peace of mind. Here's a little backstory on what our knees went through.

Dan and I met at Coeur d'Alene High School in the accounting class more than 40 years ago. I was the new kid and Dan was the old guard, as he'd grown up in Coeur d'Alene. It was through our obsession with skiing that we struck up a friendship. Dan was on the local Kaliope Sports freestyle ski team. I was fairly new to skiing, but when I saw people doing freestyle, I knew that's what I wanted to do.

The last two years of high school, we competed against each other in Pacific Northwest Freestyle events at our local ski mountains. It was one year after high school that we both made the move to Squaw Valley to pursue freestyle skiing on a higher level. We both joined the Squaw Valley Freestyle team, where we could get coaching. We were both combined skiers, where we competed in three different disciplines — moguls, ballet and aerials. Not only did we compete against each other, we also lived together during our years at Lake Tahoe. We were known as the Spud Boys. We trained on snow hard, six days a week, racking up an average 120 plus days each season.

In 1983, a movie company came to Squaw to film a B-grade ski movie called Hot Dog. Dan and I got hired on as stunt doubles for the movie doing the moguls, free skiing and ballet scenes. Dan also appeared in a few Warren Miller films as well in 1984 and '85.

During our time at Squaw Valley (since renamed Palisades Tahoe), we both excelled and were selected to compete in the freestyle nationals. If you placed high enough at nationals, you earned a spot on the US Freestyle Ski Team, which competed on the World Cup circuit against international ski teams at locations around the world.

The following winter, in 1984, Dan took home the national title, beating all the other 100 U.S. competitors.

After the win, Dan was awarded a spot on the U.S. Ski Team and would be competing throughout the world. The winter of 1985-86, Dan took off to travel the world: The Spud Boys were now on different paths, separated.

I was living in Squaw Valley and competing on the regional level while Dan was traveling with the national team. It was after the third World Cup event of the season I got the call to join up with the U.S. Freestyle Ski Team: The Spud Boys were together again for the remainder of '85-'86 World Cup season.

Later, in the summer of 1986, I was offered a job performing jumps and ballet in a freestyle skiing show sponsored by the Volvo car company. Dan was planning on going back with the U.S. Ski Team. It looked like the duo would be separated again, but by the end of summer Dan gave up his spot on the U.S. Ski Team and took a position with the Volvo show. Now, the two Spud Boys were traveling the world, skiing and making a living. By now it was looking like we were pretty much a package deal. If you got one Spud Boy, you got the other. 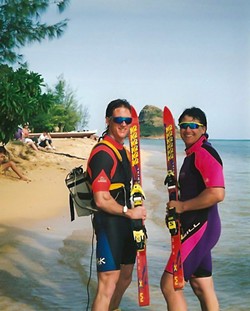 Courtesy photo
The Spud Boys, Bob Legasa (right) and Dan Herby in Hawaii in 1992. They took their big air stylings on the road for a decade, hitting 1,200 jumps a year.

The Volvo ski show was a dream come true for a freestyle skier, performing dozens of shows each winter at ski resorts throughout Europe, North America, South America, Japan, New Zealand and Australia. In the fall, when we weren't jumping on snow, we were jumping off an artificial ski ramp at skiing trade shows, fairs, NFL halftimes and even atop a Rose Bowl Parade Float. The ski ramp was 30 feet tall, and we would slide down a plastic surface and get catapulted 20 feet into the air doing flips and spins, landing on an air bag. Over the years, we both had a couple of mishaps, like missing the airbag and landing on the concrete. We were averaging between 1,000 and 1,200 jumps each season over a 10-year period.

We both retired from ski jumping around 1994, and for the past 30 years we both still skied hard, ranging anywhere from 40 to 60 days of skiing a season. This repeated knee pounding has gone on for almost four decades.

A few years back, Dan started having a lot of pain in his right knee — so much that he was limiting his ski days and having difficulty working day to day as a general contractor. He was living on Advil and ice, and many nights the pain was so bad that he couldn't sleep. After months of deliberation, Dan ventured into Dr. Lyman's office to discuss total knee replacement.

"The doctor told me it was bone on bone," Dan said, "no meniscus left to separate my tibia from fibula, so after hearing what options I had, the doctor scheduled me for a total knee replacement. I had the surgery last May right after ski season ended."

The surgery went well, and Dan started the demanding physical therapy almost immediately, working on range of motion and strength. "They had me walking about 30 minutes after waking from surgery. They told me I could leave the hospital once I was able to walk to the restroom."

Within a few weeks, the pain was minimal, and Dan was off all medications within six days. Dan continued his PT for two months and was back out doing his day-to-day work routine in two weeks, and vigorous physical activity like hiking within eight weeks.

"Probably against the doctors' orders, I got in some water-skiing at seven weeks," Dan added with a grin.

Fast forward to this past December and Dan's first day of skiing. Dan felt confident about getting back on snow and putting the new knee through the real test. Dan said his biggest fear was, "Would I be able to ski at the same level I did before?"

Dan's thought after that first day: "Why didn't I get this done three years earlier?"

Last weekend we were at Big Sky in Montana visiting Scot Schmidt, a longtime mutual friend from our days at Squaw Valley. Scot is one of the forefathers of steep, technical skiing, and he made a huge name for himself in the ski industry. Dan and Scot starred in a few Warren Miller movies together back in the '80s.

During our visit, Scot took us up to an area they call the Chutes, a ridgeline filled with numerous cliffs, rocks and steep 45-degree chutes. I watched through a camera lens as both 60-year-olds skied like they were in their 20s. Watching Dan ski this challenging terrain without any hesitation or pain was my indicator that he's back on track and pain free. I heard Dan mention to Scot: "I have to think about which knee got repaired because it feels great." That was the peace of mind I needed.

So, for all of us aging athletes, there is hope that we can once again do many of the activities we so much love to do pain free. Just like in our younger days, I probably should have worked out a package deal with the doctor. ♦

Bob Legasa has been a Snowlander contributor to the Inlander since 1994. He's also a Hayden-based independent videographer, TV producer and snowsports event promoter with his Freeride Media company.