From Backyard to Center Stage 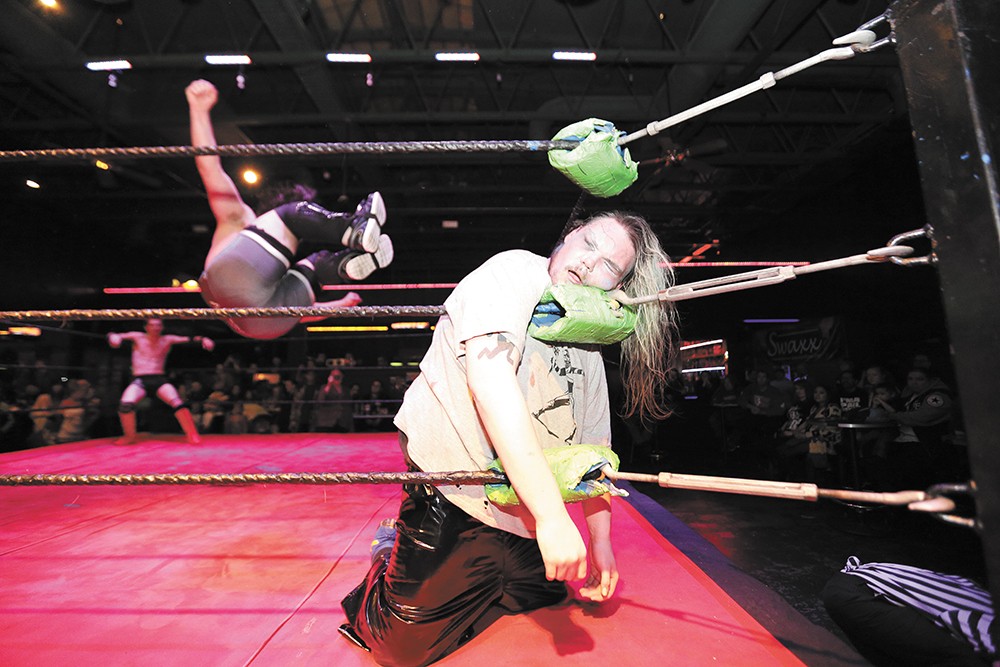 "Be sure to hold your kids back,

because there will be grown men flying over the ropes."

What could be heard as a safety warning comes across more like a simple statement of fact from the announcer. And while some strollers and toddlers are briefly corralled back from the wrestling ring, once the Battle Royale headlining the night's festivities starts, parents and kids alike move closer to better view the brutal, high-flying action.

About 150 fans are crowding the booths and tables of Swaxx's dance floor surrounding the elevated "squared circle" where Spokane Anarchy Wrestling — aka S.A.W. — is hosting its first-ever indoor showcase after eight years of delivering chokeholds, leg drops and pile-drivers on the hard ground of various Spokane backyards.

The nearby stage that typically features rappers and DJs tonight is a curtained entryway where characters like Madd Man Manson, the Masked Juggalo and Insanity Demon can make a properly theatrical entrance. They're greeted by cheers from those who recognize them from S.A.W.'s YouTube channel, or howls from people who recognize some past act of competitive nefariousness. The Inner City Champion, Harley Heartson, manages to evenly divide the fans, half yelling "Let's go Harley!" and half responding "Harley sucks!"

For a casual newcomer to S.A.W.'s fight night, the scene might not look exactly like a slick, professional undertaking. More careful observation, though, reveals a remarkable amount of work being put into the "Battle of Washington" — so called because some of the competitors traveled from the North West Pro wrestling group on the west side of the state.

There are suited commentators announcing and videographers filming the action for future home viewers from as far away as Japan and Australia. There are ring announcers guiding the live audience through the action, and referees "controlling" the chaos. There are even ridiculous "managers" for some of the wrestlers, on hand simply to rile the crowd and pull some shady shenanigans to help their clients. Basically, everything you might see on a telecast of big-time pro wrestling is here, being done by volunteers purely out of love for putting on a show.

The ringleaders are S.A.W. founder Jesse Lawson, 25, and his cousin, Jason Lawson, 26, who together do much of the behind-the-scenes work, from booking matches to writing storylines for the wrestlers to buying the ring about a year ago and learning how to put it together.

For Jesse, the first indoor S.A.W. show is in many ways the culmination of a dream he talked about in a 2010 Inlander story — a dream of having a real ring, chairs for the fans and touring wrestlers battling S.A.W. characters. Looking back a couple of days after the Swaxx show, he called the night "probably the best performance we've ever done." The excitement of moving from the backyard to a real, indoor ring was not lost on his team of about 25 wrestlers and production assistants who helped make the show happen.

"They were hot about it," Jesse says. "They were stoked. It was the first time I've had a lot of our boys say, 'Hey, I'll be on the show, sure, but I'm just happy this show is happening.'"

One dream achieved, the cousins — who wrestle tag-team matches as the First Family, including at the next Swaxx S.A.W. event on March 7 — have bigger aspirations. Jason wants to reach the point when they can charge for tickets and even sell merchandise.

"I just hope to see it getting bigger," Jesse says. "Maybe not arena-bigger, but just bigger in the city's eyes. I wouldn't mind getting on Wikipedia and seeing under local sports teams: Shock, Indians, Chiefs and Spokane Anarchy Wrestling." ♦

Atlas of the Heart by Brené Brown