From Brussels to Arkansas, a Tough Week for Monsanto 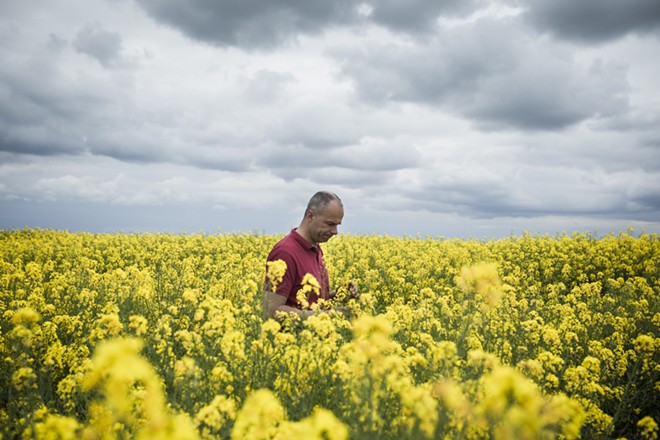 Ed Alcock/The New York Times
Arnaud Rousseau, a sixth-generation farmer, walks among his rapeseed fields in Trocy-en-Multien, France, May 9, 2016. Rapeseed yields in Europe, where genetically modified crops are banned, remain higher than in Canada, where GMOs have long been in use. “My grandfather had horses and cattle for cropping,” Rousseau said. “I’ve got tractors with motors.”


Opposition from France and Italy doomed a European Union vote Thursday to reauthorize the world’s most popular weedkiller, glyphosate, a decision that came hours after Arkansas regulators moved to ban an alternative weedkiller for much of 2018.


The decisions are a double blow to the agrochemical industry and particularly to chemicals giant Monsanto. An appeals committee of European officials will convene later this month, though, to weigh again whether to continue to allow glyphosate just weeks before its registration expires. The chemical is the main ingredient in Roundup, one of Monsanto’s flagships, but its patent has ended and it is now made by much of the industry.

The effort to reauthorize the weedkiller failed to receive a majority even though regulators were seeking only a five-year reauthorization instead of the typical 15, amid controversy and disputes about cancer risk that have made glyphosate’s future in Europe uncertain. Its approval in the region expires in mid-December.

The vote Thursday, which was weighted based on the population of the various EU member states, was nearly 37 percent in favor of renewing the chemical and a little over 32 percent against, with nearly 31 percent abstaining.

In Arkansas, regulators voted Wednesday to ban the use of another major weedkiller, dicamba, for more than six months of next year, including the summer, amid widespread reports of crop damage. Dicamba has been around for decades, but new versions have been developed by Monsanto, BASF and DuPont as an alternative to Roundup. The regulatory recommendation is now being sent to a state legislative panel.

The decisions reflect an increasing political resistance to pesticides in Europe and parts of the United States, as well as the specific shortcomings of dicamba, whose tendency to drift has given pause even to the Trump administration’s Environmental Protection Agency, which has otherwise largely acceded to the wishes of the chemical industry. Dicamba has damaged more than 3.6 million acres of soybean crops in 25 states, roughly 4 percent of all soybeans planted this year in the United States.

Regarding the decision in Arkansas, Scott Partridge, vice president of global strategy for Monsanto, said in a statement Wednesday that the company was disappointed that state regulators “voted to put Arkansas farmers at a disadvantage, but we’ll continue to follow the process to help those growers have greater choice next season.”