From College to Chaos

Seventy years ago this month, all that held Germany back was Bill Akers and his brothers in arms 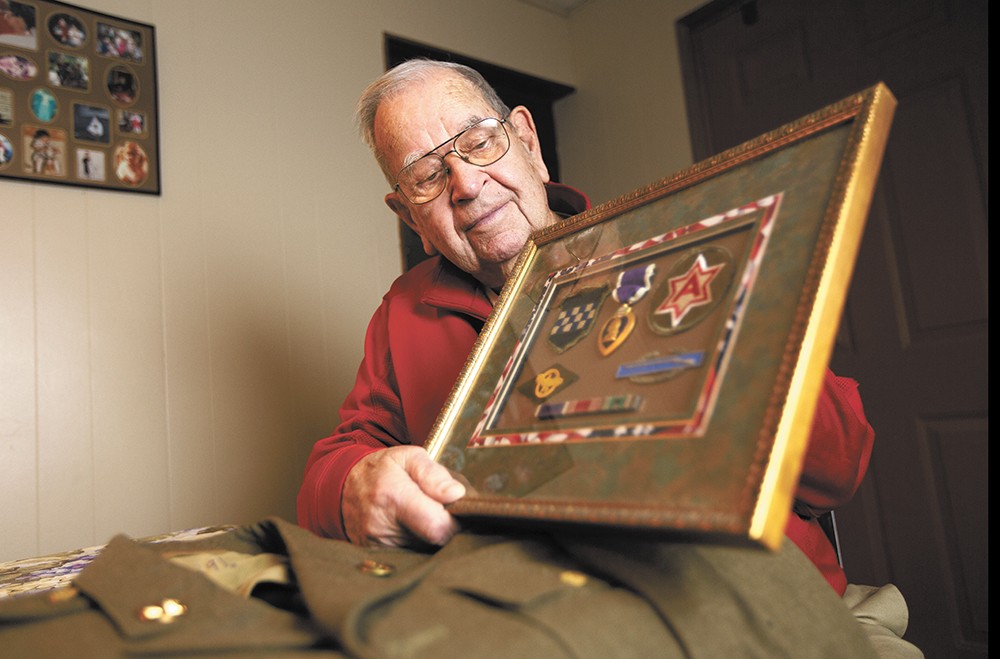 Young Kwak
Bill Akers, a private first class during World War II, with his uniform and awards for service.

You can find veterans of World War II in some surprising places.

Take Bill Akers — a regular out at the Fairways Golf Course, he's still hitting 160-yard drives at the age of 91. Sitting in the clubhouse between rounds, it's hard to picture, but 70 years ago this month he was stuck in a foxhole in the middle of one of the bloodiest battles of the war — the Battle of the Bulge.

"I can still see that German sergeant waving his troops forward... " Akers recalls. "Then we got the hell out."

It was 70 years ago that Hitler

launched his final offensive of the war. The allies had been on the continent since June, and the last-gasp plan called for the Germans to drive through the allied lines to Antwerp; the attack came on with terrifying suddenness. It would end five weeks later in a total German defeat. American casualties, including captured and missing, would total upward of 80,000. Germany would lose even more and surrendered in May of 1945.

Akers' division — the 99th — had a lot to do with stopping the German advance on the critical northern flank.

It's hard to find people who were there. In 2015, estimates show there will be fewer than a million World War II survivors in the United States; in Washington state, Akers is one of just 25,000.

Born on July 22, 1923, in Seattle, Akers graduated from Seattle Prep and went to work in a shipyard; he was drafted in March of 1943. Shortly thereafter, he was chosen for the Army Special Training Program. But then came D-Day — troops were needed immediately, and Akers, together with his fellow ASTP students, were called up from their various college classrooms. The 99th arrived in Le Havre on Nov. 2, 1944. Akers recalls the French city looked as if "it had been stepped on."

The 99th was taken directly to the front, along a sparsely occupied, 20-mile stretch in the Ardennes. On Nov. 10, Akers moved into his foxhole. The Germans were no more than a mile away, sometimes as close as 500 yards: "We could hear them."

Five cold and snowy weeks went by without major action. But on the morning of Dec. 16, at 5:30 am, Akers was jolted awake by a German artillery barrage — the opening salvo of the Battle of the Bulge.

of the 99th were the very first Americans to confront the German onslaught. An official report puts their dire situation into perspective:

"[Field Marshal] Von Rundstedt's plan was simple: to strike a thinly held line of a green, untried division with an overpowering force. Behind the 99th was the highway to Eupen; paratroopers would drop there in strength. Panzers would follow SS troops, hook up with paratroopers, and strike for Liege before the Americans could shift their forces."

"When the barrage ended," Akers remembers, "the Germans charged from the tree line. We were on a reverse slope, in a low draw — a bad place to be."

"Well, we held for a short time, then we got the hell out."

Akers' company was about to be overrun. They retreated to company headquarters. "We made it," says Akers, "and now we had the advantage — the Germans had to come up through that draw."

What happened next might be described as a double massacre. Most of the American soldiers who didn't make it back were killed in their foxholes. But the Germans were the next to be slaughtered. Akers says that after it was over, he counted more than 70 bodies right in front of his line of foxholes. It got very close, and very nasty.

"One German officer made it into our line," Akers recalls. "I saw him machine-gun everyone in the trench, and then... he just dropped his rifle and surrendered. This guy standing next to me had seen enough. He looked at the German, now with his hands raised, and shot him in the head."

The battle raged for three days

. The college kids held out. American losses were enormous. Akers' company entered battle with 186 men and six officers. Two days later, "only 36 of us were still alive and not wounded."

Military reports show the soldiers of the 99th — dubbed the "Battle Babies" — were outnumbered five to one, but they inflicted casualties on the enemy at a rate of 18 to one. The 99th eventually did make contact with the 2nd Division (which had landed on Omaha Beach), and together they held two strategic towns, Rocherath and Krinkelt. All would then fall back to the Elsenborn Ridge, which they held until the battle ended. Shortly before midnight on Dec. 20, the battlefield was declared "all quiet." The Germans' advance was stopped.

On Dec. 18, Akers recalls making contact with a forward observer, who told him he was calling in artillery support. Akers says to this day he can still smell the cordite from that incoming barrage; it was that close to the American line.

During that dark night, Akers was wounded by friendly fire. "It really wasn't that serious," he says. While examining his wound, doctors discovered that those weeks in the foxholes had left him with trench foot; that's what eventually sent him home.

A final note: Like so many other members of the Greatest Generation, Akers wants readers to know that he does not regard himself as a hero.

I think we all know different. ♦