From Forest to Table 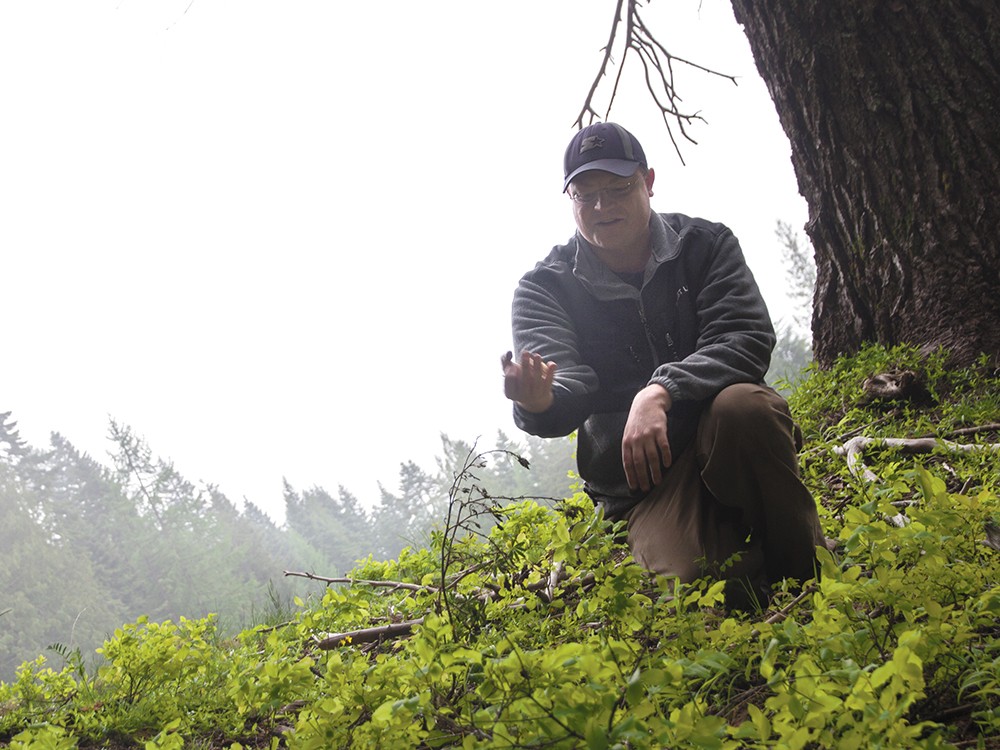 Spend a few hours poking around the forest floor of Mt. Spokane with Josh Yake, and you won’t view nature the same way again. You’ll likely see it as a garden waiting to be harvested.

“We’ve got morels! Look at all these morels! Holy shit!” Yake yells out from a cedar-treed hillside.

It’s a damp, overcast morning out on the lush, green mountain, and he’s hit the jackpot, stumbling across a patch of recently sprouted morel mushrooms on a steep slope covered in huckleberry bushes. Only a few of the fungi are large enough to harvest now, Yake explains as he pulls a knife from his pocket to carefully cut one of the oblong, sponge-textured mushrooms from the ground.

“Where there’s one morel, 99 percent of the time there are others. If you don’t see them, you’re just not looking,” he explains. “There’s a lot of land out here, and you could walk for four days and not find one, but you just have to tune into what you’re looking for.”

Having foraged for edible plants and berries since his childhood, at a family cabin on Twin Lakes, Idaho, and during camping trips around the Northwest, Yake only more recently decided to turn his longtime hobby into a full-time venture, establishing Gourmet Foragables & More back in 2010.

In addition to the highly sought-after morels he’s just discovered — which will go for as much as $40 a pound — Yake’s finds for the day include fiddleheads, the immature coiled tops of a lady fern that taste somewhat like asparagus; stinging nettles, which are used in teas, soups or as a spinach substitute; and miner’s lettuce and coral mushrooms, named for their structural resemblance to ocean reef coral.

It’s been a successful foray so far, and Yake and his girlfriend, Jill Pittmann, are only about an hour into it.

While foraging for naturally occurring plants and fungi has been a means of sustenance from the beginning of humanity, it seems to have recently resurfaced as a modern food trend, fitting in nicely with other food movements like using locally sourced ingredients, organically grown produce, and urban gardening.

“It’s like we’re returning to a simpler time with everything in our food system, trying to get away from industrialization and all the corporations and all the pesticides,” Yake says. “You can come out here and there is so much good stuff that is free and abundant and good for you.”

Getting started in the treasure hunt that is foraging is easier than one might think. A number of mushroom hunting and foraging clubs around the area — including the Spokane Mushroom Club, the North Idaho Mushroom Club and the Wild Edibles group in Post Falls — offer educational group forays to teach beginners how to identify and find some of the more common edible plants and fungi in the Inland Northwest.

Do an online search for the term “foraging,” and pages and pages of results offer up links to hobbyist foragers’ blogs and websites, and trending news articles on the topic. Most of these resources emphasize the importance of learning to identify edibles with an experienced forager to avoid confusion with look-alike toxic species.

Yake says there are a number of poisonous plants and mushrooms out there; the best rule to follow is when you’re even the least bit uncertain about a potential edible, don’t pick it and don’t eat it.

As part of Gourmet Foragables, Yake recently started offering educational forays, taking groups out into the woods to hunt for edibles while teaching his methods for finding and harvesting them.

Martin is one of several area chefs who frequently incorporate Yake’s foraged ingredients into seasonal specials, like a watercress vinaigrette that’s been popular at Casper Fry.

Martin says he buys from Yake once or twice a week, taking whatever he’s foraged that could find its way into a dish.

For Yake, other than serving as his main source of income from spring to fall, foraging is both a satisfying escape into nature and a self-sufficient means of using what nature offers us as sustenance.

When he forages, Yake practices what he preaches to others: take only what you can use, and use what you take. And though some might view foraging — or more specifically, foraging and making a profit from it — as exploitive of nature’s resources, Yake says his experiences have only instilled in him a deeper respect for the land.

“This is real food. A hundred years ago this would have been a much more common practice, but somewhere along the line we just sort of lost it,” he says. “There’s something about reaping the seed you didn’t sow — it’s just cool.”