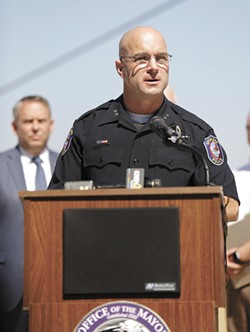 Readers respond to last week's cover story ("Chief Among Them," 12/12/19) about Craig Meidl, Spokane's police chief. During his tenure, the department has faced criticism for its use of force and racial disparities in arrests, among other issues.

Mariah Rose McKay: The chief's comments on racial disproportionality are really not OK. The force needs to take responsibility for the disproportionate stops and shootings and everything in between.

Loanne Odell: How about you stop being a criminal first? There! Solved it.

Darcy Hildebrand: I think Chief Meidl has been successful in his role and certainly so in comparison to the previous office holders. We always want to have civilian oversight and discourage over-reach by law enforcement, especially with regard to the use of force, and any cultural factors that allow or dismiss it. However, if you listen to our members of the City Council and the current City Council President-Elect, then crime is down considerably in Spokane.

Larry Cebula: So predictable that Meidl's first instinct is to defend a clearly out of control officer. Same thing when he saluted Karl Thompson right after the man was convicted. Why can't Spokane rein in its police department?

Timothy Thompson: It's easy to judge and take a video out of context. It's much different when you are confronting a dangerous criminal and attempting to place them under arrest. Leave cops alone.

David MacLean: Keep him. He is the best we have had for a very long time.

Terry Parker: It's not that people of color commit more crimes than people who are white. It's that they are targeted by police. That's why the numbers are disproportionate to their number in the population. Every reputable study has shown that whites use drugs at higher rates than blacks. Yet look at their conviction rates for drug crimes in relation to their prevalence in society. Sorry Chief, it's racism and you can couch it in any type of data that you want to but it's still racism. ♦

Speaking of From Readers, Readers Respond