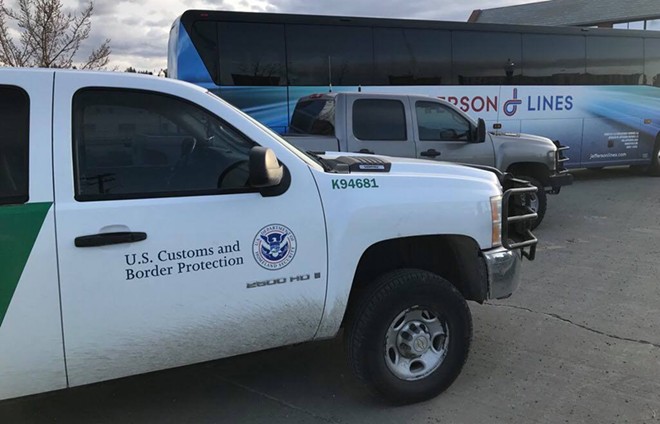 Photo courtesy of David Brookbank
A U.S. Customs and Border Protection truck parks outside the Intermodal Center on March 18, 2018.

Readers respond to our blog about the Border Patrol opening an office in Spokane to be staffed by about 30 agents (5/8/18):

Salynn Williams: This is a damn shame. I hate the unabashedness with which this country is now embracing its historic and systemic xenophobia. At least we used to have a lie to aspire to live up to.

Bea Snover: People are getting blackbagged by the government in broad daylight to be shipped off to overcrowded impromptu prisons, rife with administrative problems and civil rights abuses. I don't see why people aren't being suspect of federal workings. Can we continue persecuting minorities? Why aren't these post-conspiratorial conservative bootlickers ready to fight what could very well come after them with impunity next.

Geni Beckham: Gotta watch the sneaky Canadians... Border Patrol needs to go back to the border!

Tim Ahern: What I read is some asshole wants to use government to expand his department likely in order to get more money. Happens all the time, too bad we don't get to vote on it. But I mean, that's democracy for you.

Peter Hire: Are they going to patrol the Idaho-Washington border? Maybe keep all those shifty Idaho-types out?

David Brookbank: You will hear repeated recourse to "the law," "they are illegal," "they broke the law." This is their bottom-line response to the moral indignation about this issue. The U.S. has always hidden behind its blood-draped flag.

Kerry Berg: We who are Americans and follow the laws are very happy. Go home, get in line and maybe you might be back to do it the right way. Support our Border Patrol!

Alex Jay Castro: So looking forward to being stopped and responding to demands to see my papers because I'm brown.

Diane Armstrong: Why do they need Border Patrol in a city over 200 miles from the Canadian border? Makes absolutely no sense. Something else is going on here. ♦


Former Rep. George Nethercutt's article in the recent publication of Inlander ("Integrity Check," 5/10/18) prompts me to speak truth to power. In the past I have voted for Mr. Nethercutt even though during his tenure some accused him of lacking in integrity. I do agree that Republican candidates in this election cycle have a tricky tightrope to walk. I could divide all voters in this election cycle into three categories.

We've seen the never Trumpers have to eat their words, the sever Trumpers try to alienate potential voters and the clever Trumpers know a good thing when they see it. This past week, Trump cancelled the Iran agreement — never ratified by a legislative body. He then met the three Korean Americans returning to America from their imprisonment in North Korea escorted by Secretary of State Mike Pompeo. He then went to a rally in Indiana supporting a Republican candidate. I don't care how much Trump tweets. He is keeping his promises he made while campaigning and showing some muscle.