The Lake City’s edition of Scratch is a lot like Spokane’s, delivering a memorable (if pricey) dining experience. 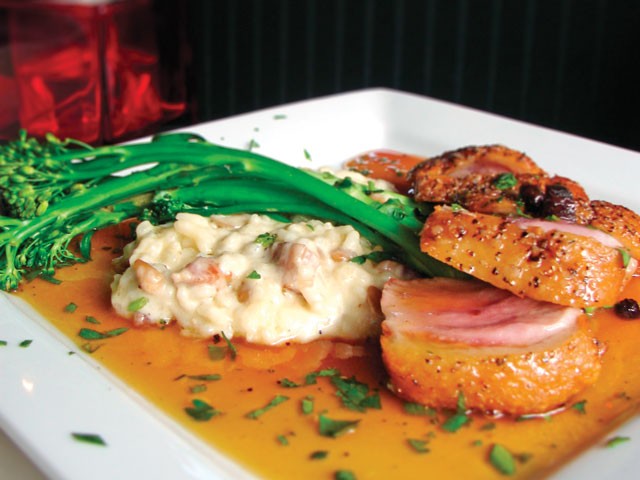 There’s little doubt Scratch was a good fit for Coeur d’Alene’s downtown when it replaced a similar bistro-style restaurant in 2009. Like the original Spokane location, Scratch CdA is near art galleries, boutiques, restaurants and other small, local businesses. And the original location had garnered rave reviews for executive chef Jason Rex and his partner, Connie Naccarato.

Ah, but could they sustain in an area where other businesses had not? And how would a place with some entrées topping out close to $30 in the latest economic downturn?

Just fine, it seems, though not without some pluck. Scratch added a daily breakfast buffet ($10, adults; $6, kids) and recently expanded, filling up an adjacent space next to and sort of behind the restaurant with the Pub on 5th. The pub is similar to Scratch Spokane’s Rain, allowing you to order from the Scratch menu.

Unlike Rain, Pub on 5th is beer and wine only.

We visited Scratch on one of the only sunny days in a month of rainy ones, so downtown CdA was hopping. We made reservations, snagged one of the primo booths that line the two walls of windows, and had a good meal with excellent service that made us wish we could afford to eat there more often.

Ever helpful, my faithful dining companion, Mr. Meat-and-Potatoes, was willing to switch plates throughout the meal. Thus he found my Signature Salad ($6) of spinach, bacon, apples, Brie, candied cashews and pomegranate vinaigrette artfully prepared and abundant. I found it needing a textural reconfiguration. Have you ever tried to spear a roasted cashew? They needed to be chopped and sprinkled throughout, while the bacon needed to be crisper. Mr. M&P’s tomato-basil bisque ($3, cup; $6, bowl), however, was wonderful: thick, creamy, fiery. Other tempting starters included the hummus plate ($7), Asian fried calamari ($8) and such salads as the Cobb ($12) and Oriental chicken ($9).

Warm phyllo twists with balsamic dressing — just like what Spokane Scratch serves — arrived while we awaited dinner. And like the Spokane location, Scratch CdA has a similar bigger-city bistro feel, with tables fairly closely grouped, some open floor seating and some partitioned areas offering more privacy.

Dinner arrived, beautifully arranged on large square plates. Mr. M&P ordered the special: parsley-crusted halibut with lobster risotto and raspberry-champagne sauce ($29). The halibut was nearly an inch thick, although we both thought that it was half-a-minute away from being overdone (better than underdone!).

The raspberry added tartness to the light, sweetness of the risotto, which was both firm and creamy. This dish paired fruit and fish wonderfully.

I had pan-seared Muscovy duck ($24), and although I had, in the past, found their duck wraps too salty, the duck itself was tasty. And it was right on target this time. My duck was truly medium-rare as requested, tender in the center with a crispy exterior, not too salty. Bliss. The pancetta and apple pine-nut risotto was an ideal complement in both texture and taste, with a smoky sweetness that went well with the robust duck. My only complaint was that the sauce — a zante currant-maple glaze — was so abundant that there was no escaping it on the plate. Mr. M&P noted that I usually complain about there being too little sauce. (I think he just wanted to remind me that I complain a lot.) Neither of us felt the broccolini was cooked enough but loved the flavor of this hybrid side-vegetable overall.

Other menu options we might have considered included wild mushroom ravioli with onion, garlic, basil, red peppers, mushroom, spinach and creamy white-wine butter sauce ($15), sesame-seared ahi with Chinese black rice ($19), and six-ounce, flat iron “picatta” steak with linguine ($18). A nearby diner ordered the Hot Pot ($25) — scallops, prawns, lobster, clams, Andouille sausage, garlic, red peppers, onions, basil, roasted potatoes and tomato broth — which Mr. M&P and I agreed would be plenty to share and topped our list for our next visit.

For dessert, we were seduced by the possibility of creme brulee ($7), the ultimate grownup vanilla pudding. Ours was served with macerated berries, almond toffee and a dusting of powdered sugar, but overall it didn’t give us the warm fuzzy feelings we’ve felt with this dish at other locales — although the vanilla flavor was refreshingly nutty and not overly sweet. We could also have had the Chevre cheesecake ($7), brownie sundae with chocolate ganache and homestyle vanilla ice cream ($7). A take-home bag of fresh-made donuts is $6.

Or for $99 per person, we could have taken home the chef himself! Special order Jason Rex to prepare a gourmet meal (eight-person minimum) at your home — not a bargain but a memorable experience nonetheless, which is how we’d summarize our dinner at Scratch.