From the big screen to your living room: Brand new movies you can watch at home

The window between theatrical release and at-home available has been narrowing for years, but with movie theaters around the country dimming their lights, that window is now shut for the time being.

Major studios are making their most recent releases available online, and you can now rent a handful of films that were on big screens around the country just a few days ago. The cost is a bit steep — each title is $20, unless otherwise noted — but maybe it's a small price to pay for a little slice of the world pre-quarantine. 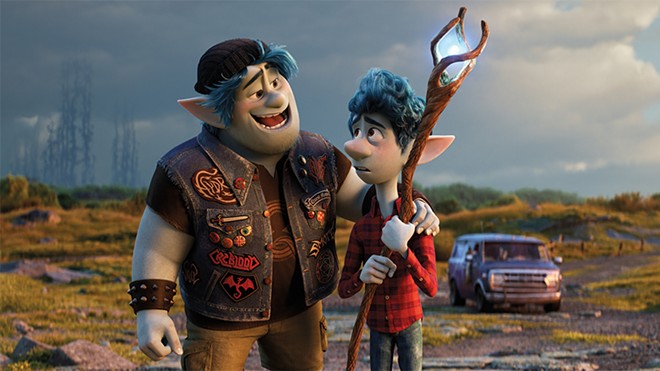 Onward, released in theaters Feb. 21, will be available to purchase through VOD platforms tonight.
Onward
If you're a parent, one of the trickiest things about quarantining is keeping your homebound kids occupied. Now they can look forward to seeing Pixar's latest, the story of two brothers embarking on a journey to bring their father back to life. The film will be available to purchase through VOD platforms starting at 5pm today, and you can stream it on Disney Plus beginning April 3. Read our mostly positive review of the film here.

The Invisible Man
Writer-director Leigh Whannell takes a well-worn premise and twists it into a terrific, unpredictable sci-fi thriller, starring Elisabeth Moss as a woman literally haunted by her abusive ex. Violent, intense and twisty, and a certified box-office hit already. Rent it here.

The Way Back
A drama starring Ben Affleck as a former high school basketball star, now a washed-up alcoholic, who returns to his alma mater to coach a faltering team. Directed by Gavin O'Connor, who has made other solid underdog sports movies like Miracle and Warrior. It was only out in theaters for a week but will be available to purchase digitally on March 24.

Emma
The latest adaptation of Jane Austen's 1815 novel, with Anya Taylor-Joy as the nosy 19th century socialite and self-imposed matchmaker who realizes all too late that she may be falling in love herself. Read our glowing review, and rent the movie here.

The Hunt
This violent Purge-like allegory has become something of a cursed production: Its initial release was postponed back in September following a spate of mass shootings, and now nationwide theater closures have hobbled it again. Craig Zobel's film seems to be pretty divisive, not just on political grounds but basic critical ones, so you can argue about it with your quarantine pals after you rent it here.

In an unusual release strategy, the distributor Kino Lorber has made its most recent theatrical release, the critically acclaimed genre hybrid Bacurau, available to stream online for $13. What's so unusual about that? Well, theaters that were already scheduled to show the film are hosting their own virtual screening rooms through Kino Lorber's website, and you can rent the film from the indie theater of your choice. As of now, no Washington-based theaters are participating, but keep an eye out as more screens are added to the current list.